Kobeni becomes physically ill after learning about her past with Hakuya. As she tries to sort out her feelings of guilt, she also realizes how much closer they’ve become.

It was a bit of a slow episode this week as there was perhaps too much time spent on Kobeni’s seemingly unjustified guilt, but the payoff was pretty great in the second half. It’s almost certain now that there is some kind of supernatural shenanigans going on. Between Kobeni’s memories, her oddly timed sickness, and Mashiro’s vague statements about defining what they “are”, I think it’s a safe bet something is up. Not to steal too much credit from Lifesong, but remember folks, you heard it here first!

The other highlight of the episode was the blossoming relationship between Kobeni and Hakuya, particularly her hilarious interpretations of his emotions. I love how they continue to joke about how stoic he is, and the shifting backgrounds highlighting his imperceptible mood swings was a terrific sight gag. Coupled with his blunt honesty, he really is playing his role well in a cast full of strong females. I still need to be sold on why Kobeni would be into him beyond “he saved my life”, but I’m feeling confident that will develop more over time. Of course there’s also the looming prospect that he could be an alien or a god or something to throw a wrinkle in the relationship too, so I think there’s enough going on to keep their otherwise straightforward romantic progress interesting. 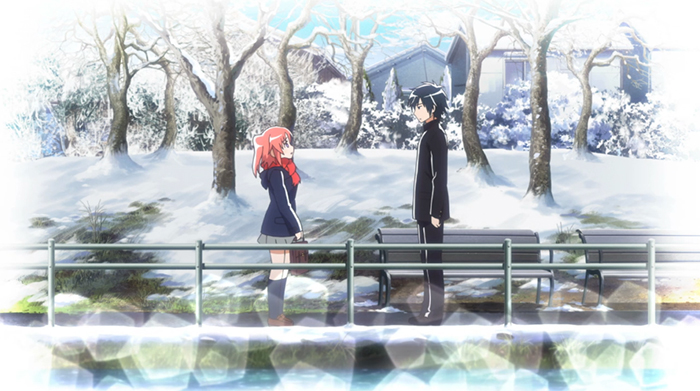 As another bonus we got considerably less Benio this week and I suspect that will be our normal dosage moving forward. I am perfectly OK that. I am also OK with the fact that I am actually more interested in the story at this point than the humor, as this seems to be the most narrative driven Dogakobo production yet. I keep expecting the plot to take a complete episode off for some comedy hijinks but they just keep on moving. Much like Love Lab before it, it never sits still for longer than it should, making for some great comedy and slice of life without the slow filler. Next to Golden Time, it’s become my most anticipated show every week and I’m really looking forward to more.