Kate decides that White Robin’s ineptitude makes her a perfect target to learn more of White Light’s operations and sends her minions to find out her identity. Somehow Asuta can’t manage to figure it out that it’s Renge until a super esoteric clue shows up. Realizing his friend is a member of the opposition, he’s conflicted over how to proceed.

Overall kind of a dumb episode to be honest. While it’s obvious to us that Renge has been White Robin this entire time, somehow nobody can figure it out until Asuta notices a weirdly specific clue. Oh well, can’t really expect much from anime in that regard. Still, there were some pretty good laughs, while I totally saw Asuta hiding in the girl’s locker room from a mile away, I did not expect him to be sitting there with his gasmask on. Though if he was gonna hide his identity anyway, I’m not sure why he wouldn’t just run out the first chance he got. Also if he can survive getting kicked out of a window and falling three stories, I don’t see how he couldn’t just jump, but hey, anime. 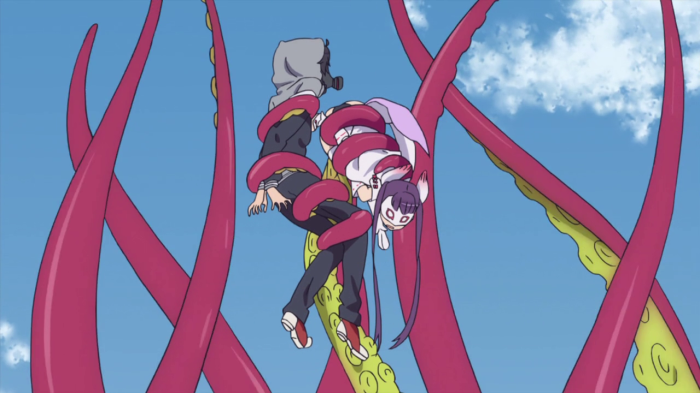 Then we get a tentacle monster, which really does not help Zvezda’s image, but once again, I can’t really say I was too surprised either. Asuta suddenly turning into a sword wielding badass was out of nowhere but I guess they had to somehow wrap up the episode neatly. Renge wearing a fake facial mask under her mask feels like kind of an ass pull, but it was to be expected honestly. In a way, nothing really happened this episode. Similar to my sentiments last week, I can’t really tell what direction this show is trying to go, if any. Asuta attempted to uncover some mysteries and move the narrative forward, and then we get set back to the status quo. Seems to be a prevailing trend in Zvezda, each episode slowly revealing and adding more to the world while maintaining a static narrative situation overall. While that should be expected at this point, I do kinda hope that the plot goes somewhere eventually.