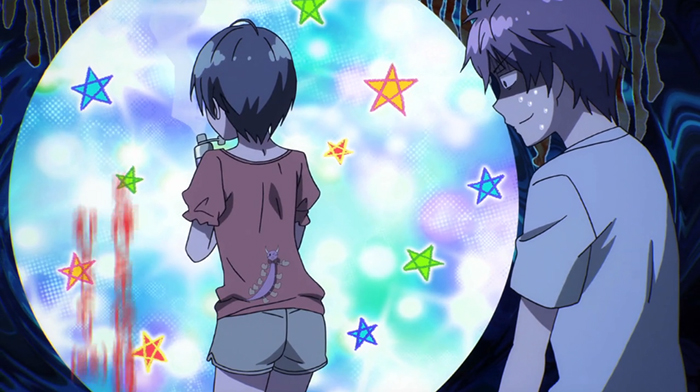 Mayumi is feeling particularly depressed and stages an impromptu acoustic show on the roof of the complex. Ritsu freaks out when she finds a centipede in her room and the entire group goes on a mission to dispose of it.

We’ve been complaining about Kawaisou’s habit of beating Mayumi and Shiro’s one note personality jokes to death, and a portion of this episode fell into that trap. The fact that Mayumi is beautiful and talented and yet ties up her entire self worth in snaring a man is kind of frustrating as well. Her reactions are too over the top and cartoonish to read into and sadly a lot of women actually think like that, so it’s not like the author is putting that attitude in a positive light. So I can understand if that frustration is intentional as far as the theme, but it doesn’t excuse how often the show feels the need to tap into it for laughs.

As far as the rest of the episode, the “girl scared of bugs” scenario is one of the oldest Romantic Comedy tricks imaginable but the ensemble cast managed to put a fresh spin on it. It felt more like an adventure as the team prepared and set off to find it, and there were even some genuine laughs like depicting the centipede as a happy cartoon character. I suppose it still did boil down to the main character deciding whether to slap it off the girl’s backside or not, but even that eventually got derailed as Sayaka came in to save the day. The entire incident gave us some cute moments between Usa and Ritsu without overly romanticizing something as silly as finding a bug in the house.

Overall this episode wasn’t as good as last week’s stellar outing, but a solid amount of fun nonetheless. I’m also encouraged by next week’s preview as it looks like Usa will be returning to work at the cafe. I am all for continuing that story line as that was Kawaisou at its best, particularly if Hayashi returns to potentially shake things up with our main couple. One final note: I wonder if they had a guest director this week as there were a LOT of Shaft poses throughout the episode. Maybe it was just an homage, but it was very noticeable.

A bit of a down week after a well executed scene last week. Mayumi is already incredibly annoying, so devoting an entire half episode to the reasons why she’s annoying really isn’t helping us like her better. Like I’ve said of this show in the past, if you have your own characters talking about how annoying another character is, then there is a problem with your character. Are we supposed to feel superior because we’re not annoying like her? Are her hysterics supposed to be endearing to anyone? I just don’t get it.

The second half was better, but boiled down to a very cliche romcom narrative. We were just lauding this show for the fact that it’s normally subverted the idea of the boy having to protect the girl, so having such a straightforward example of that very concept is a little disappointing. That said, I do get what Jel means. Having the whole house on the hunt for the myriapod (gotta use that Biology degree when I can) let them bounce off each other much better than the first part did. I still think the method of killing the thing was absolutely stupid. There’s no reason you can’t just smush a centipede with a shoe, bringing boiling water into the equation just seems like asking for someone to get burn injuries, which is exactly what happened. I’m going to take the episode more on faith that Usa saving Ritsu is not the only reason she’s being kind, but rather she’s gradually coming to accept her deeper feelings for him.