Once they’ve arrived in Singapore, the heroes are attacked by Ebony Devil and Yellow Temperance.

Looks like JoJo is working out pretty well as a biweekly post, considering the pace of things and the monster-of-the-week format, so we’ll be continuing with this for the foreseeable future. That said, there still isn’t really much to say, since the show is still sort of working through its fodder villains. The only reason anyone even remembers Devo/D’bo/Soul Sacrifice and Rubber Soul is because they were in the old Capcom JoJo fighting game. Otherwise, they’re both pretty forgettable, and the episodes are more notable for a few ridiculous tidbits than because of the plot. So, perhaps typical JoJo?

As is customary for a newcomer to the group, Polnareff gets to show off his stuff when Ebony Devil ambushes him in the hotel room. Somehow he fails to notice the incredibly conspicuous voodoo doll just sitting there on his nightstand, though. I mean, does he just assume that it’s a Singaporean thing to have creepy voodoo dolls just hanging around all over hotel rooms? I’m pretty sure every single viewer immediately pegged that thing for being the enemy Stand – or at least related to the enemy somehow – the instant it appeared on camera. But I guess Polnareff is kind of a moron, so it probably works out.

The only thing I remembered from the manga about the Yellow Temperance arc was the whole RERORERORERORERORERO thing, which reached memetic status years ago and probably will be going through a minor resurgence after this episode. Other than that, it’s the basic “Jotaro somehow bullshits his way through the fight with selective application of ORA ORA“, which is pretty much the norm for every arc of Stardust Crusaders. At the very least, we got a great nod to Battle Tendency with Jotaro whipping out the Joestar Family Secret Technique, and next week will be the start of a pretty fun arc.

As you might guess, the JoJo crew gets attacked by two more Stand users in the form of Devo and Rubber Soul.  The first episode is basically a chance for Polnareff to strut his stuff, though it also kind of just shows how dumb Polnareff is. You’d think that after getting attacked in his own room, he’d think it’d be better for everyone to come to his room. Course the rest of the cast isn’t much better since they know that Polnareff was just attacked and act as if him being late to the meeting is a mundane occurrence. Like seriously guys, not one of you thought to maybe check in on the guy who was just attacked by a malicious Stand user? Luckily he’s a great Stand user though and manages to come out on top despite the numerous odds stacked against him.

The second episode is just more Jotaro winning through the power of ORA ORA and bullshit, as is customary for JoJos. As always though, I was quite entertained by Jotaro’s usage of the Joestar secret family technique. Theoretically a Stand like Yellow Temperance should be basically invincible, but of course Jotaro manages to find some way to asspull his way to victory. In his favor though, JoJo always manages to come up with fun ways to end fights, even if they don’t necessarily make too much sense if you think too hard about them. While Stardust Crusaders remains largely a monster of the week anime, next week will give us some pretty fun antics if it goes where I think it will.

Not much to say about the first episode. It’s cool seeing our characters show off their stuff, even if it seems clear that their opponents seem to care more about flaunting their abilities than actually killing any of them considering all the time Devo had to do the job. This is getting increasingly hard to believe considering every single assassin has talked about how no assassin overuses his Stand so that people can’t tell it’s weakness. Then the next episode happened. Just… That stupid noise Kakyouin makes when eating a cherry… what the hell guys?

All things considered, this most recent episode did make me laugh my ass off at how ridiculous it was. Still, what was up with the bugs thing? It seemed to serve no purpose than to make it seem like Kakyouin was possessed when he was really just not Kakyouin, so the whole exercise was just weird and confusing. I’ve learned by now that I shouldn’t question JoJo, so I’m perfectly fine with the complete nonsense reason for why Jotaro’s able to just punchghost his way to victory after it seemed clear that punch-ghosting shouldn’t’ve been able to help. 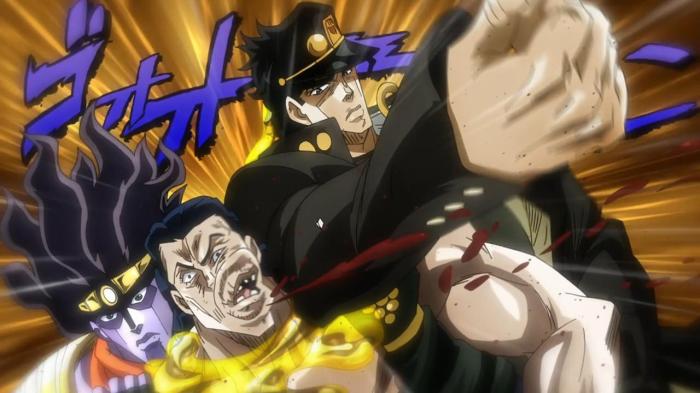 One thought on “JoJo: Stardust Crusaders Episode 8 and 9”