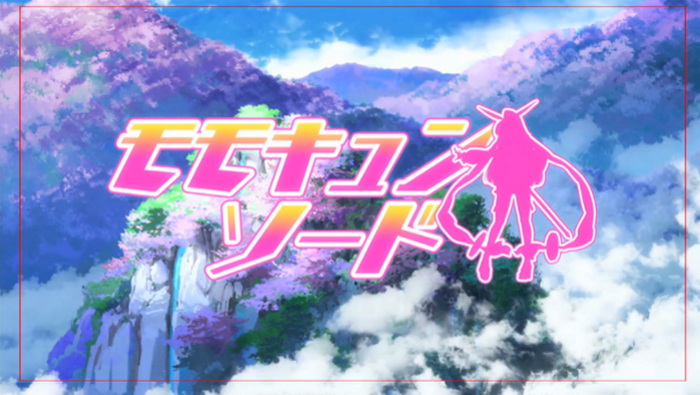 Momoko, who was born inside a giant peach, repels an orc attack with her sword and a little help of her divine animal companions to save her village and protect a sacred peach fragment.

I’m usually all for genderbent mythology nonsense and this show does that well enough. The problem I have with this anime is less with the anime itself and more that I don’t find Momotaro’s myth to be all that interesting. Still this show does an alright job as a silly magical girl warrior show. It’s pretty dumb, but that doesn’t stop it from being mildly amusing. The fight at end of the episode gives me some sense that there will be a few decent actions scenes at least. I won’t be watching more myself though, as there are too many things are far more interesting than this is for me to spend my time here.

And I am not kidding. Momo was born in a peach, the item they are trying to protect is a peach fragment, heck, Momo has several peach shapes in her design, including a rather lovely peach shaped chest window. Momo means peach in Japanese, we get it already. Speaking of, this show also seems rather obsessed with Momo’s large, bouncy bosom as well, though I suppose some will probably consider a good thing.

I still admittedly enjoyed this first episode though. Momo is pretty fun and cute, as is her trio of animal friends/gods, and seeing her pull out the unison card with her wolf pal and go from zero to hero to kick some butt when the chips are down was easily the highlight of the episode for me. I certainly look forward to seeing what her other transformations will be and what powers she gains by mastering them. Overall I am not really expecting much out of Momo Kyun Sword, but I don’t think that is the aim of the show to begin with. It seems satisfied with being a dumb, silly, fanservicy affair that aims to crack a few jokes and rip a few clothes as Momo kicks some orc butt to save the day. Surprisingly the show does, however, aspire to looking quite pretty and being well animated and hopefully that isn’t a one episode deal as I plan to stick around and make this my guilty pleasure show this season.