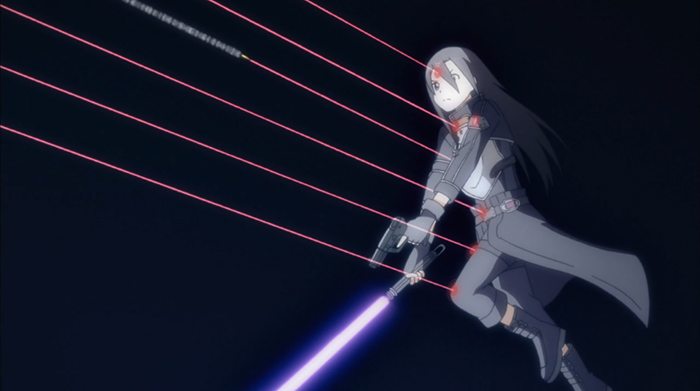 Kirito and Sinon enter the Bullet of Bullets tournament but their relationship goes sour when she discovers he’s a guy. Kirito faces his first round opponent and discovers the harsh realities of… oh who am I kidding? He murders him with ease.

No surprises this week and our heroes arrive at registration with time to spare and Kirito handily wins his first match. I could complain about how super human Kirito’s reflexes would have to be deflect EVERY SINGLE BULLET shot at him, even with the aim assist, but you know what? I’ll give them that one. If they’re going to make him a Jedi Knight they might as well go all in, and honestly it does make for some cool looking, flashy fight scenes. Speaking of Jedi Knights, I’m sure I’m not the only one that got total Darth Vader vibes from DEATH GUN (and yes, I will always write his name in caps), with the mechanical voice and cryptic threats and what not. Revealing his connection to Laughing Coffin was a neat little callback to something that seemed relatively insignificant in the original SAO. I could be on board with some kind of broader connection between all the games if I had any confidence in the writer pulling off something cool with it, but I think I’ve made my opinion clear on that enough at this point.

As far as Sinon goes this week I found her reaction to discovering Kirito’s gender a little off putting. I get the whole angry because he saw your (virtual) underwear thing that’s been done a billion times in other anime, but it was clearly an accident. He never claimed to be a girl and he immediately turned away when it went down. Does she just hate guys in general or something? She seems pretty comfortable with the other dude she knows from school, so maybe she just sees him as a threat now? That didn’t seem to be a problem pre-accidental underwear peeping so I don’t know. It just seemed odd that she would flip personalities so easily.

If I’m looking forward to anything it’s the fact that the plot is demanding more action at this point, so hopefully we’ll get some cool battles to watch. I’m assuming we’ll see Sinon back in action next week and Kirito will get his first look at how good she is. Hopefully they won’t drag things out too long as their will not be much suspense as to who will win up to the bracket final – the all too convenient rules about both finalists advancing guaranteed that – but I’ll take another episode of cleaning up some no-name cannon fodder.