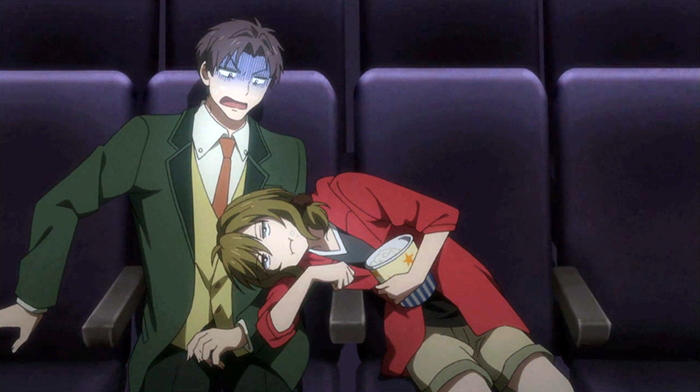 Seo conveniently has a spare ticket to a movie and asks Waka to come along. When a Drama Club member is injured before rehearsal, Hori auditions his friends for a replacement. This does not go well.

I’m going to go ahead and declare Seo and Waka my favorite couple. I love them all really, but seeing as they are the most “normal” characters I’m finding their relationship to be more realistic and relatable. Their little movie date this week was totally plausible, particularly Waka overthinking things as he tries to sort out his feelings. Watching him try to reconcile his affection for the girl sitting next to him with the kind of girl he thinks he’s supposed to like is just another great example of how Nozaki-kun questions gender roles without smashing them in your face. Does it matter that he’s a guy and he likes drama and romance while she’s a girl and she loves action and violence? NOPE! I will say the final mix-up with Seo and Kashima’s singing voice might have been the first time I felt frustrated with the series for stalling a relationship just for the sake of stalling, but overall their scenes were pretty great. 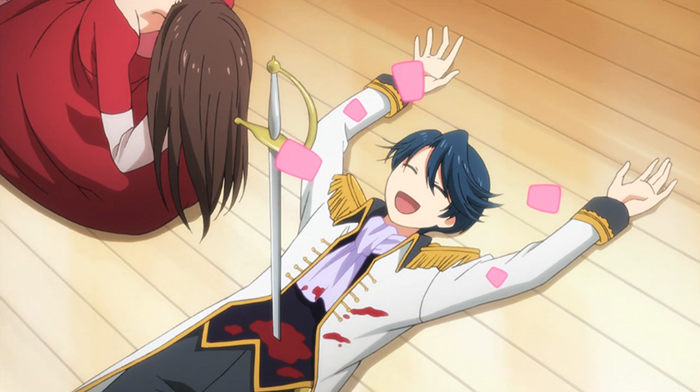 As much as I enjoyed the first half, the second half packed in even more substance with the other two couples literally taking the stage. If Seo and Waka are my favorite couple then Kashima and Hori are a close second. Hori might be one of the most nuanced (and therefore best) male characters I’ve seen in a long time. Most male anime protagonists are either unmotivated slackers with no interest in anything or hot blooded meat heads whose singular devotion to their passion blocks out everything else. Hori is confident enough to be a leader and passionate about his craft, but he’s also still thoughtful and practical. Watching this episode kind of made me wish he was the main character. Chiyo and Nozaki’s perspective as observers fits the series better, but as I’ve said before I would totally watch a show about Hori and Kashima.

Arguably my favorite part of all this was Kashima and Chiyo recognizing each other’s feelings about their respective crushes without saying a single word about them. First Kashima’s hilarious love trance (for lack of a better term) on stage as she went through the motions to get to Hori, then Chiyo literally emitting flowers at the thought of Nozaki in costume pretty much put to rest any doubts on their feelings. That, dear readers, is some good writing and directing. And you know what the best part of it all was? Both girls were happy for each other. It sounds so simple but it’s so refreshing when nearly every other anime romance out there resorts to jealousy and heavy handed melodrama to try and keep their relationships interesting. This series could have easily fit into one of Marlin’s Love Centipede™ situations with all the wrong guys in love with the wrong girls or vice versa. Instead we have a cast that can genuinely, unconditionally love each other and we’re all much better for it.

This show continues to be the most adorable thing. Waka and Seo nearly steal the show. I love how every attempt Waka takes to somehow show up Seo just lead to him endearing himself to her more. As a man who does enjoy romance stories, I also like this show’s continued commitment to showing that just because you’re a man or a woman doesn’t decide what your taste in entertainment is. I love how all of Seo’s moves during the movie that Waka found annoying could really just be interpreted as her trying to get closer to him. I am equally annoyed as Jel when it came to the misdirection in the choir room. I know this is first and foremost a gag comedy, but a man can dream that we’ll get some actual payoff with one of the couples before the show is out.

I say nearly though, because Kashima and Hori really bring their A-game too. It’s super sweet how far Kashima goes to try and win Hori’s affection, even though it’s usually so misguided. The bit where she couldn’t even act because of her happiness was great, and I loved that they got so involved with their normal back and forth that they couldn’t do their scenes properly. I’ve been feeling more and more sorry for Sakura over the past few episodes. She keeps getting her chain yanked with Nozaki. On the bright side, it usually leads to a great gag, and watching Nozaki try to wrestle in a bear costume was certainly a high point. Unfortunately the scene that followed relied on the old “Let’s dick with Mikoshiba” gag, which has  kinda become old hat  at this point.  Still, they manage to mix it up enough that I’m not totally disappointed, and it is nice to see Mikoshiba still involved in the show. Another great episode to the stand alone hit of the season.