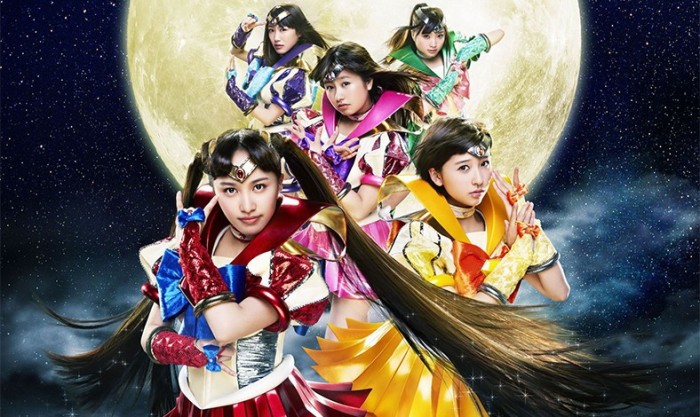 Summer is generally the least interesting period of the year in the world of music, yet I must say I was pleasantly surprised at the sheer amount of enjoyable anime songs this season. I suppose the guy running many a voice actress’s lackluster soprano through Protools deserves a break as well. In any case, it’s time to select the best of the best as the season comes to its end, and with two of our very favourite OPs in recent memory — Space Dandy‘s “Viva Namida” and Jojo’s Bizarre Adventure‘s “Stand Proud” — rendered ineligible due to having appeared before, we might actually offer a wide variety this time!

It’s amazing how something as simple as having a guy singing a pop anime song instead of a girl can be so refreshing, but then again Nozaki-kun is bursting with “refreshing”. Not only is the song incredibly fun and catchy, the stylized manga visuals explode with color and energy. Throw in some dabs of super impressive animation and it’s impossible to watch this without smiling.

As disappointing as the show itself may be, you can’t lay any of the blame at the door of it’s theme song. Featuring Momoiro Clover Z’s trademark relentless guitar attack, this is a perfect piece of power pop that bursts with style and energy, bringing the Sailor Moon opening into a new generation with endless style and verve. The lyrics proclaiming how the Sailor Guardians don’t need no man to save them are delightfully agressive and the whole thing is overflowing with the passion the show so obviously lacks. Bonus points for the incredible cosplay album cover too.

My only regret is that I couldn’t go to the Space Budokan and see this live.

Nozaki-kun was by far my favorite show this season, and that extends to its fantastic theme song. Granted, I am a sucker for the proper application of acoustic guitar and brass in any situation, but this song is just popping with energy and flair. Not to be outdone by the music, the visuals have a great color palette and a great sense of style. I love how little traits or personality quirks are shown just in character shots, like how you can tell that Mikoshiba blushes a little right after he’s introduced, or how Hori is backdropped by a painted canvas. I also love the random scene of Sakura and Hori blowing up the tanuki in some weird manga dreamscape, as it is beautifully animated despite the absolutely silly nature of that sequence of events. Overall a great bit of work that gets you pumped for the great episode to come.

Nine and Twelve leaving the word von, Icelandic for “hope”, behind on the scenes of their crimes and mentioning being into “music from a cold land” made me believe Shinichiro Watanabe was trying to sneak a reference to Sigur Rós into his work, yet the angelic voice appearing on Terror in Resonance‘s soundtrack turned out to belong to a wholly different Northerner. Agent Fresco‘s Arnór Dan teams up with Yoko Kanno for a haunting ambient track, first heard in episode 9 when Twelve tries to save Lisa from the ferris wheel. Almost completely build up around an endlessly looping piano melody and the repeated phrase “winter/summer/ converging”, strings carry the song to its atmospheric climax, while the lyrics nicely highlight a theme of the show — hope for a better future in a post-war Japan. Sure, it isn’t technically an opening or ending song, but this is my feature so I can do whatever the hell I want. Bite me.

I loath to give Argevollen anything resembling overwhelming praise or accolade, but in the absence of anything better this season, Argevollen ends up being what I have to default to. While the OP itself isn’t outstanding, the last 15 seconds is a particularly nice shot. Being the mecha fan I am, I’ve always been a sucker for zooming hangar shots showing off the machines of the show.

You don’t always need a guitar-centric, fast-paced song like “Stand Proud” to get excited for the episode at hand. Barakamon is a refreshingly laid back show, almost to the same kind of levels as Natsume Yuujinchou, which makes Super Beaver’s opening theme a perfect fit. The visuals also match the show’s content more or less perfectly, with Handa obsessing over his calligraphy, and Naru running around having fun regardless of everything else going on around her. I’m sure the visuals play a good part in why I like this song so much, but honestly, any piece of music that can put a smile on your face before the show actually begins has got to be a winner.

Did your favourite make the cut? Did we overlook a massive hit? Will there ever be a idol group that doesn’t become infinitely better when you add metal to the mix? Make sure to let us know in the comments!