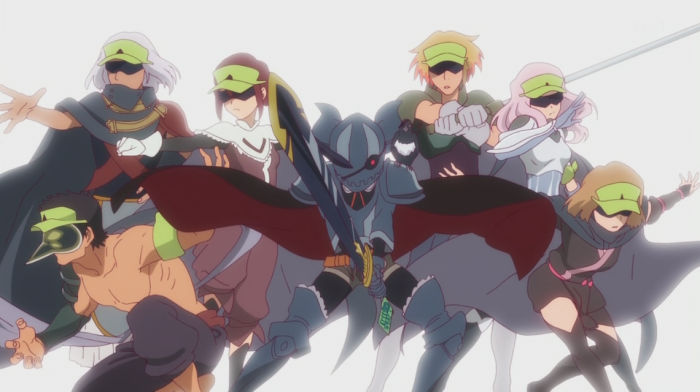 The newly formed group rolls into Tokyo, now called Always Comima where a misunderstanding brands them as criminals. Given only a day to find the leader’s missing stone, their own falls into her hands. Given the choice between doing the right thing and getting a sweet 1:1 figure of Favaro, the leader of the Otaku mecca does pretty much what you’d expect.

I like that this episode was gorgeous to watch for different reasons than the first two. Where those had a great style and sense of speed and power, this episode showed off the more colorful parts of this new post-apocalyptic Japan. The pastel style used for every building structure worked perfectly into this theme of a world where expression is king. Admittedly, the character models were pretty off whenever they started entering the background, but after the first few episodes I can forgive the team for taking a break to give us more focus on each character’s motivations, as well as learning about this weird new version of Tokyo.

It seems we’re going to be drip fed backstory and plot development for the most part. Considering the President’s attitude in this episode, there must be some greater threat we don’t know about yet. Since Chi is her daughter, does she really have an ulterior motive for gathering the moonlight stones, or does she simply have a different plan of how to use them? Either way they get in quite the bind right off the bat. Considering they understand that these stones have some power to them, it seems like a bad move to just flash it out and say HEY DOES ANYONE KNOW WHERE I CAN FIND MORE OF THESE SWEET, SWEET STONES?” Granted, Nozomi doesn’t seem to have much worldliness so I guess we can chalk this up to a learning experience. Ai continues to be my favorite character, keeping the energy up and having the gall to think she could take on a Best by herself. I also like that she and Yukina state that they really aren’t complete allies with Nozomi, they’re just with her for the ride. A good bond takes time, and I like that they’re showing that just coming together doesn’t mean they’re all of the same mindset. Still, when it comes to Yukina I just don’t get what she brings to the team. All I can think of is she’s there to pander to people who like characters who always act like a total waif.

It’s interesting that the show talks up Thunder Road so much in the beginning just to have her be short-sighted and petty any time we actually see her. I wonder if that was basically like giving us the public perception of her and her team, instead of any deeper insight to her true character. The actual Thunder Road is the worst kind of person, the kind that knows they made a mistake, and yet refuses to correct it for the sake of their own greed. While the girls are getting their chance to escape, one wonders how they’ll be able to get their rightful stone back.