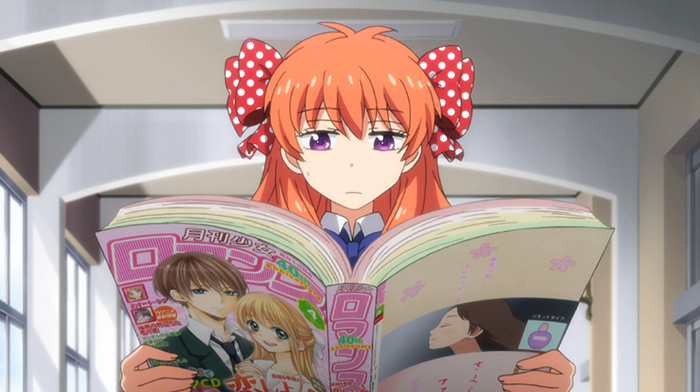 It’s sure been a while since the last Anime Club post, but with the sudden onslaught of fresh blood joining the GLORIO ranks, we ended up with more than a few recommendations being thrown around. If you’ve forgotten, the rule is that we watch a show in its entirety, no holds barred, round-robin style. At least, that was the plan before we descended into chaos. We’re trying to get things back in order, but much discussion occurred over recent anime and we decided to hold a bonus round to make sure nobody got hurt.

This time we ended up with a veritable cross-counter of anime watching: newcomer Artemis would watch the sleeper hit fantasy Rage of Bahamut: Genesis, and the ever-cynical Iro would have to watch blog favorite Monthly Girls’ Nozaki-kun in return. A fair trade? Read on to see what we thought!

Why Rage of Bahamut: Genesis?

Iro: Bahamut was the biggest surprise of 2014, a wild swashbuckling fantasy adventure cropping up seemingly out of nowhere. While it didn’t necessarily break any new ground, Bahamut was content with merely being superbly constructed and tons of fun. Bolstered by an endearing cast and a tremendous budget (as well as perhaps the strongest first act I’ve seen in any anime ever), it’s one of the standout anime in recent memory. When Artemis mentioned that she loved fantasy anime but hadn’t yet watched this show, I just couldn’t let the issue drop.

What did you think?

Artemis: Thankfully, reports of Bahamut’s greatness were not exaggerated. I’m not going to claim it’s now one of my favourite anime titles of all time or anything, but this is an excellent series nonetheless. I’m a long-time fantasy fan too, but the more I like a genre the pickier I tend to get – so when I say that Bahamut is probably one of the best straight fantasy shows I’ve seen in several years, it’s no empty compliment. Bahamut is a fun, energetic, and sometimes charmingly goofy series, with a strong action-adventure bent and a very infectious vibe, and I’m glad I was eventually persuaded to watch it.

Not gonna lie, there were a couple of things that niggled at me throughout the show. For example, while I never seriously expect any historical accuracy out of my anime, it bothered me that people kept referring to the still very much alive Joan of Arc (or Jeanne d’Arc if you prefer) as Saint Jeanne. On another note, the fanservice, while hardly offensive and kept relatively light through most of the proceedings, does occasionally get a little too on the nose.

Still, the positives more than outweighed the negatives for me, and the sheer style which Bahamut brings to the table is especially laudable. The soundtrack fits the exuberant tone of the series perfectly, the animation is beautifully done, and the artwork itself… wow. Detailed and highly distinctive yet also really nice just to look at, the character designs here are truly fantastic – major props to still-fledgling studio MAPPA for more great work. Oh, and speaking of fledgling, I can’t not give mention to Shimizu Risa, who did an outstanding job as Amira despite the fact that this was her first time in the role of main character. Cap all of this off with a head-banging OP and you’ve got yourself one awesome show.

Artemis: Because nearly everyone on the Glorio team (but especially Iro) peer pressured me into watching Bahamut, and so I jumped at the chance to strong-arm Iro into watching Nozaki-kun when the topic happened to come up.

More importantly though, Nozaki-kun turned out to be my biggest surprise of that season – truthfully, I wouldn’t even have picked it up myself if several other bloggers hadn’t strenuously recommended it to me. Nonetheless, I admit I wasn’t prepared to be so well rewarded for my time. What I expected was tired slapstick ‘comedy’ combined with cheap fanservice and maybe a couple of decent one-liners; what I got was brilliant scripting, a truly epic cast, and quite literally a sore stomach from laughing so hard.

What did you think?

Iro: Thanks to my bizarre, inexplicable love affair with Love Lab, Dogakobo has managed to stay on my radar, but I resisted watching Nozaki-kun as long as possible even as seemingly the entire Glorio crew fawned over it. I had skimmed the first episode when it originally aired, but ended up unimpressed by the show’s dogged adherence to shoujo tropes even as it gleefully lampooned them. And… that’s basically how the rest of the show went, as least as far as Sakura and Nozaki’s relationship was concerned. Where Nozaki-kun really caught my attention was with the side cast.

All of Nozaki-kun‘s best jokes involved its secondary characters, from Waka’s stubborn refusal to realize his own feelings despite acting directly in accordance with them to Mikoshiba’s endless adventures of being a massive spaz. I particularly liked the drama club president and his diligent work ethic clashing with Kashima’s carefree misunderstandings. They provided the variety necessary when Sakura’s endless pining over Nozaki got old, and they were numerous enough that their running gags never really overstayed their welcome for too much at a time.

Overall, Monthly Girls’ Nozaki-kun is a solid comedy that doesn’t over-rely on cheap tricks, and knows when to switch focus to other characters when any given pair starts to get a little dull. While I’m clearly not as keen on Nozaki-kun as its other fans in the Glorio crew, I can definitely see why they enjoyed it.