Team Try Fighters faces off against the Gunpla Academy for the National Championship. There’s lots of shouting and questionable power creep.

It’s finally here folks, the awaited final clash between our…heroes? Villains? I’m not even sure what to call them at this point, because quite honestly, I just don’t care. Team Try Fighters have utterly failed to capture my attention and support. The Gunpla Academy have also utterly failed to evoke any emotion out of me beyond apathy. You can refer to last week’s post for my feelings about the characters involved in this week’s big fight, but the short of it is that I simply don’t care. 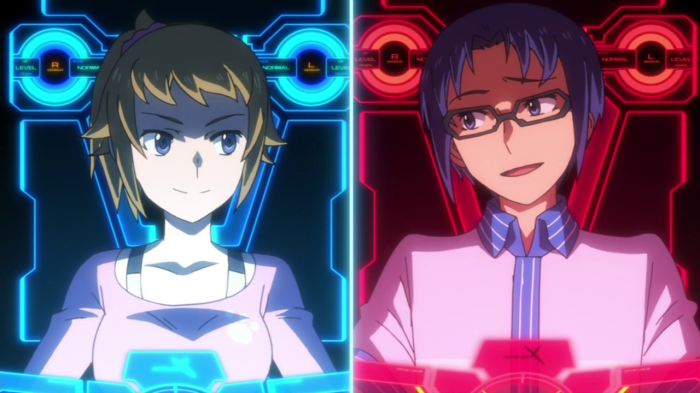 The fight itself is the kind of high octane excitement I came to expect from Gundam Build Fighters. There was a ton to latch onto this week, and some genuinely good moments. Splitting up Sekai from Fumina and Yuuma was a smart thing to do, as it kind of exposes why exactly Try doesn’t work. Sekai’s the kind of character who works best in 1-on-1 situations, while Fumina and Yuuma are surprisingly compelling when paired up and not constantly worrying about Sekai’s martial arts dumbassery. The fight as a whole is a further testament to all of Try’s potential and all of its failings. Try was not always doomed to mediocrity and disappointment, in fact if you go back and read my initial impressions, Try had me excited more than even its predecessor.

There’s lots of good in the show, this can’t be denied. There are individual characters that on their own, are wholly sympathetic and interesting. There are some great robots and clearly some great ideas the studio wanted to execute. But as is often the case with such shows, while the base premise is solid, the execution is clumsy. 3-on-3 was simply never going to work as well as its predecessor’s narrative framework.

And I guess that’s the problem with the fight itself. It has a lot of strong individual moments, but when taken together into a cohesive whole, none of it is that good. Yuuma and Adou’s shouting contest isn’t hot blooded or interesting because neither of the characters are interesting. We’re supposed to see this fight as the culmination of their rivalry right? Then how come we have literally gotten less than 10 minutes of them interacting with each other in the last 10 episodes? Minato is literally a far better rival for Yuuma than Adou ever was, and we concluded that arc last week. And don’t get me started on Fumina and Shia’s supposed “rivalry,” which we’re supposed to believe in, despite the fact that those two have gotten even less time together than Yuuma and Adou. I literally don’t even need to say anything about how flimsy Sekai and Wilfrid’s rivalry is, because only a fucking moron couldn’t tell how threadbare and insultingly stupid it is. Altogether, the events of this week’s fight would be cool if they had taken the time to properly set it up. The reason the Reiji/Sei vs. Fellini fight was so compelling is because Gundam Build Fighters made it a point to set up the relationships before the big fight. Try fails to do any of that, and as a result, the fight itself also feels less impactful.

And so the fight comes to an end, and what do we get? We get a fight that’s more Dragonball Z than Gundam, and while I was initially awed by the spectacle, I was immediately worried about it. Destroying a quarter of the planet in an energy blast that creates miniature black hole is in theory, a very cool thing. The problem is that this isn’t Gundam anymore. This is a demonstrable example of power creep, and all of the nasty implications it brings with it. When you now have robots that can literally destroy celestial bodies, how do we get the likes of the Zaku Amazing, K9 Sniper, or even the Fenice into gunpla battle again? When you have robots that can blow up the moon, how do you fit the less-powerful robots that rely on strategy and experience to win? It doesn’t matter how many traps you set up or if you attack from a good vantage point if your opponent can blow everything up in a 10 mile radius.

A less intelligent person would ask, “What’s wrong with that? Blowing up the moon is cool!” And to that I answer, “Do you want every fight to be Dragonball Z?” Of course not. You love the fights from Hajime no Ippo, YuYu Hakusho, and other shows that occur at far lower power scales. That’s the keyword: Scale. Try has irreversibly heightened the scale of its conflicts, and anything that comes after will forever live in its shadow. With season 3 being all but announced, this is a genuine concern for the longevity of the series. Gundam Build Fighters has always been about the freedom of gunpla. The freedom to build whatever you want, whether it be Gundam or Zaku, Federation or Zeon, Real Type or SD. When you shift the power scale to a level only the top 1% can reach, you’ve destroyed that freedom, and that’s what Try has done this week.