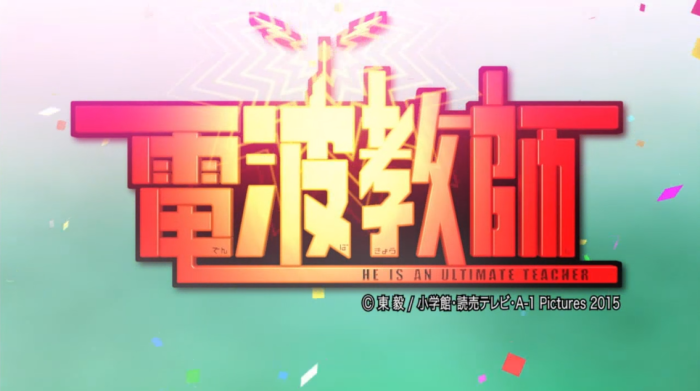 Nobel Laureate and NEET Junichiro wants nothing more of his life than to do what he wants. When we find him, that currently means lazing around all day updating his anime blog. Since apparently the one million dollars he would have been awarded for such an achievement wasn’t enough for his family, his sister forces him to start working at his old high school. Dumb things happen afterwards.

This show is another in a newer series of power fantasies: the technical mastermind. In this, the main character is so incredibly brilliant that he could do anything he sets his mind to, he just doesn’t feel like it. I’m sure many a NEET would love to sympathize with that mindset, but personally I just found it tasteless. I’m getting the feeling its like some Otaku GTO, with the teacher using his knowledge to punk his unruly students into submission instead of intimidation and saving their lives like Onizuka. I know I can’t really call it tone-deaf due to the source material’s age, but after the fallout of Gamer Gate, having a plotline be his threat to dox the girls for bullying was hard to stomach. I suppose the one thing it’s got going for it is at least the dude isn’t creeping on any of the girls. This is the epitome of a selfish person, someone who has the power to affect change in their life and chooses not to. We’re meant to think of this guy as respectable for trying to help these students, but in light of his backstory it just makes him seem pathetic.

I was kind of hoping this would be like The World God Only Knows which walked a very thin line between otaku power fantasy and it’s overall positive message that yes, you do indeed need to get out of the house more. As insufferable as TWGOK’s main character can be, you almost have to admire his complete devotion to his craft. Ultimate Otaku Teacher (which is a much worse title localization than the one Iro came up with) attempts a similar path but fails miserably. Our eponymous teacher just comes off as arrogant and lazy and completely unlikable, skating through life with his superior intellect and catching the attention of a cute girl that wants to be an anime voice actress. In a way it’s even worse than other power fantasies like Sword Art Online, hitting just close enough to home for its target audience to glorify their lifestyle. The final straw was the topical. gut churning stupidity of our “hero” threatening to dox a bunch of girls to punish them, and I haven’t even gotten to the fact that this might be the worst animated thing A-1 Pictures has ever attached their name to. Do not watch this.