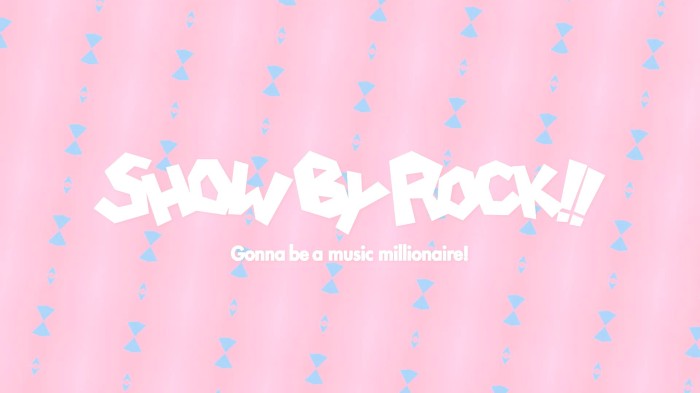 A schoolgirl gets sucked into a phone game and is subsequently 3D and mouthless, but only some of the time.

Colons’ verdict: I tried. I promise, I tried.

There were moments in this first episode where I briefly succeeded in convincing myself it was a subtle but scathing teardown of the idol industry and everything that surrounds it. When our protagonist is sucked through her phone into School Idol Festival and stripped naked while transitioning between worlds, I was trying to interpret it as a commentary on the soul-sucking nature of free-to-play games or idol managers’ immediate and constant focus on the bodies of their signees. When a giant monster shows up and attacks a band, I thought it might be a metaphor for managerial assault. When the protagonist meets two managers and both ask her to sign on with their label, I was waiting for them to present the obvious third option and treat it with the respect it deserves.

None of these held up by the end of the episode. That’s not to say there aren’t self-aware commentaries that do; they play with the idea of using contracts as a vector for horrific exploitation. It’s just that none of the things I wanted to interpret as snide commentary panned out. The show’s School Idol Festival stand-in turns out to not be inherently evil, merely exploited. The monster of the week is just a monster. The protagonist consciously dismisses the idea of not signing immediately as inherently ridiculous. Maybe that’s on me for trying. Maybe I should just be interpreting this show at face value. Yeah, let’s try that.

It’s really hard to think of something this first episode did that seemed fresh or compelling. The characters are, at least so far, predictably tired archetypes that have no interesting motivations or flaws whatsoever. The protagonist wants to join a band, the manager’s enthusiasm for S&M is played for humour, and there’s a shadowy evil figure who wants to take over the world. Alright, surface-level story isn’t working either; let’s get even shallower.

I really liked the art and direction in the 3D bits. The fight sequence is consistently well framed and paced and lit. The characters don’t have mouths so that nobody has to lip sync them, but they make up for it by syncing up every note of their instrumental performances perfectly. The environments are about what you’d expect of short episodic content, but I feel they get a pass on that because while they’re not especially detailed, they are plenty striking. Outside of the 3D sections, though, the show is visual gruel, falling like the plot into some uninspired and lower-detail midpoint between K-On! and Aikatsu.

There’s… a pretty funny visual goof with a stretched limo, I guess?

Nope. It’s not worth it. I’m gonna say that unless it pulls one hell of a Madoka, you shouldn’t watch Show By Rock. I watched The Tale of The Princess Kaguya a few hours after watching this garbage, though, and that’s great. Go watch that instead.

This is pretty much exactly what you’d expect if Sanrio made an anime to appeal to the otaku crowd (which is what this is), right down to the copious amounts of CG furries. The plot seems like it has the makings of a show for young girls a la Aikatsu with its heroine getting sucked into a game world, but then you throw in the cat girl maids slipping up and saying “nyaaa~” and it’s pretty clear what Show by Rock!! is all about. I can’t deny I got a certain level of amusement seeing how desperate and laser focused on the demographic this whole mess gets, but that’s not a good reason to keep watching a show.

And no, I will not apologize for my terrible verdict.