Tuesdays at 1:00 pm EDT on Crunchyroll

The big day is finally here. With tensions high, Reina and Kumiko continue to support each other in reaching their goal.

This final episode was the best of both worlds for me. Shippers got what they wanted, and I got what I wanted, a finale that showed their hard work over this season made tangible. It even ended with an orchestration of the opening song, a nice touch considering the actual song’s obvious use of synth instruments. Just as Kumiko’s new resolve as she stands confidently in front of the mirror call back to her original shallow motivations, seeing scenes from each group in the band show how much they have changed since the beginning of the season. Everyone is united in their desire to succeed. Their determination makes their eventual payoff seem deserved. It reminds me a bit of Chihayafuru, another competition anime that cared just as much about its characters as its sport. The best sports stories make you care about these people’s struggles and make you want them to win, and Euphonium has succeeded with that in every way.

The ReinaXKumiko was strong here, almost from the get go. The little back and forth on the train was just adorable, and a perfect scene to show just how comfortable the two are around each other now. Compare this to Kumiko’s bizarre avoidance at the beginning of the show and it really speaks to how their relationship has changed and grown after Episode 8. I love the solidarity of Reina tying her hair, as it gives shippers some good material while also being just a sweet scene in general. Anyone who had any doubts about the solidity of this relationship can feel pretty safe after this finale. I think it says a lot about KyoAni’s intentions that as the episode comes to a close, one of the last shots is a close-up of their locked hands. 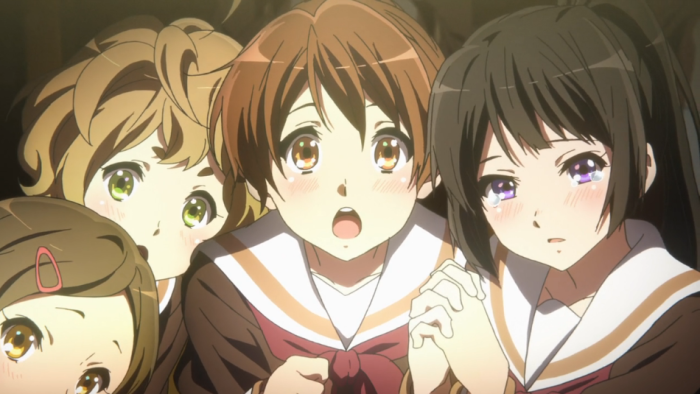 I came to Sound! Euphonium hoping to see the Japanese take on band culture. Sure, coming from KyoAni made me uncertain about whether any of my expectations would be met, but it seemed to come out swinging. The first episodes established an interesting take on the problems seniority can make Japanese high school and what it means to play in a band. I was hoping to see more of the marching side of things, but its relative unimportance showed the differences in priorities that have developed between our countries. At least in my school, the idea of competitive performance wasn’t even a thought, let alone a mandated reality. While I would hardly call its portrayal perfect, I enjoyed the drama up until the triumphant climax, where their hard work pays off. If there’s anything I love the most about music shows is when they actually play music, so to hear such a pretty performance on top of a great scene was just icing on the cake.

If I were to leverage any major complaints about this show, the middle certainly dragged. Kumiko’s inital persona was likable for its snark and ability to not just spout moe nonsense everywhere. Unfortunately, her antics got pretty tiring once every interaction between Reina and her boiled down to “oh look, she is super awkward, isn’t that funny?” I think anyone would be hard pressed to say this show turned into anything special until episode 8. One would also be hard pressed to defend against the mocking moniker of Legs! Euphonium that the show gained up to that point. The fanservice was only more apparent when the superior storytelling found in the final arcs was absent and one was given time to think about some of the show’s more unsavory aspects. To prove just how different some of these initial episodes were, here’s something  I actually wrote at one point.

“I’m also still confused as to how Reina gets inserted into the plot at this point.” 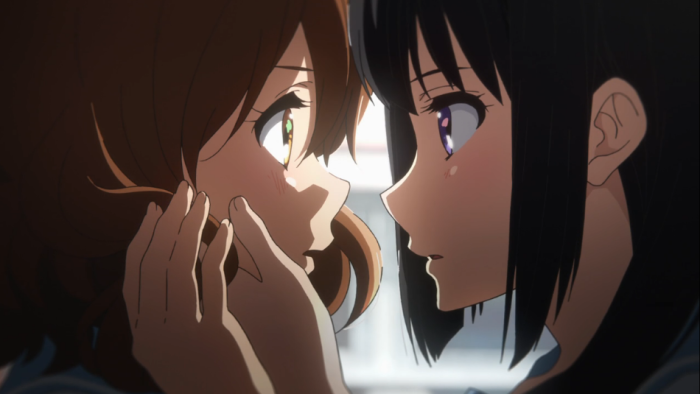 I suppose you can blame my heteronormativity for that one. I have to wonder if I, or most other people who have watched this show for that part, would even have the same feelings if the relationship between Reina and Kumiko was written as a heterosexual one. There’s been a lot of joking about how ‘gay’ the show is, but honestly, is it? I’ll be the first person to admit ignorance to what makes something stereotypically gay, but that kind of thought never came to my head when watching this show. Maybe this is just me coming to terms with understanding a true homosexual relationship, but it really seems no different than any other romance show I’ve watched. Well, except for the fact that these characters actually flirt with each other instead of bumbling around until a big confession scene. Defining their relationship purely by the hotbutton issue it represents seems more disingenuous than anything else.

As I’ve said time and time again, a solid ending can make or break a show. Euphonium really managed to knock it out of the park in its final stages, and the climax is something any fan of music or romance can be proud of. If the kind of care put into building relationships in this show was applied to any other romance narrative, I think it would make it instantly more appealing. Sure, this may be only taking Western sensibilities into account, but actually having flirting goes a long way to establishing some believable interaction between people when they’re interested in each other. I hope the favorable numbers Euphonium has seen will show KyoAni that they can take chances to make stories with some actual depth. Their level of quality always makes watching their anime enjoyable, but it’s always an extra treat when the storytelling can keep up. Even with the emotional highpoint of the competition, there is still much more of this story that can be told. Let’s hope we can hear from them again sometime soon. 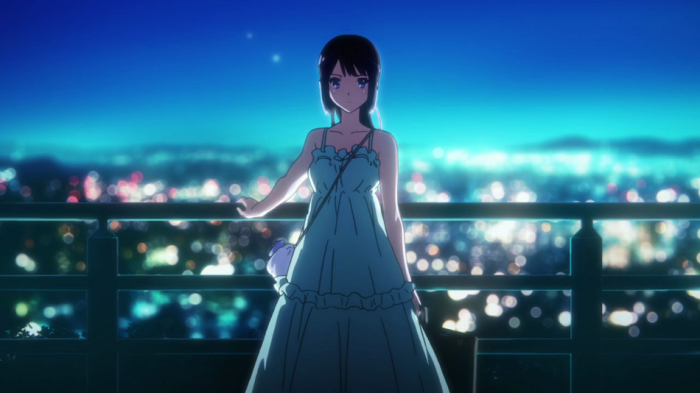 Early on in Sound! Euphonium, the band’s advisor asks an important question: do they want to play for fun or do they want to play to win? It’s a theme that runs so deep that it’s reflected in the very structure of the series. In the first half our heroine Kumiko struggles with the question. She’s comfortable hanging around with her new easy going friends but feels awkward around her former bandmate Reina, who is defined by her drive to be successful. As a result, the tone is light and the pace is slow. I must admit as the girls continued to act cute and the speed of each episode grinded to a halt, I lost interest in the show around episode 3. I was ready to write it off as the mature, beautiful older sister of the spunky, spontaneous K-ON! – relaxed and fun and technically sound but, frankly, boring.

But as Euphonium hits the midpoint the tone changes. As Kumiko and the rest of the band sharpen their focus on competing it almost becomes a different show. There are no more inane conversations about how to properly introduce yourself or detailed instructions on how to care for your musical instrument. Instead, things get serious. Tensions rise, words get sharper, feelings get hurt. Kumiko transforms her fear of Reina into an intense fascination, turning into one of the most romantic relationships I may have ever seen in an anime. This is when Euphonium really starts to shine, grabbing your attention with every scene and really digging into the meat of the questions it asks early on. 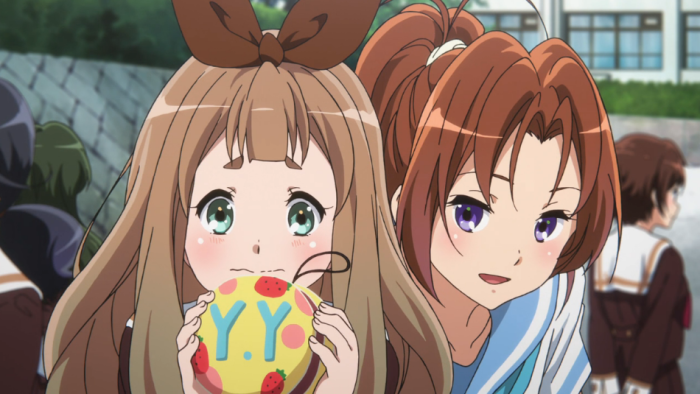 So how do you judge a series that is OK at best for one half and amazing for another? I guess it depends on how “amazing” we’re talking and Euphonium gets pretty high up there. The second half is arguably the most impressive display of “drama” that Kyoto Animation has ever produced. They are on point with everything, whether it’s the stunning visuals, top notch directing, fantastic music choices, or perhaps most surprisingly, the insightful dialogue. You kind of expect the incredible prodution values from KyoAni (which is at the top of even their lofty standards) but getting well written characters that feel like real people? Awesome. When you consider the net positives, there’s no question Sound! Euphonium is worth watching. It may be slow in the early going, but if you can trust that it has a purpose you’ll be rewarded with one of the best shows of the year.