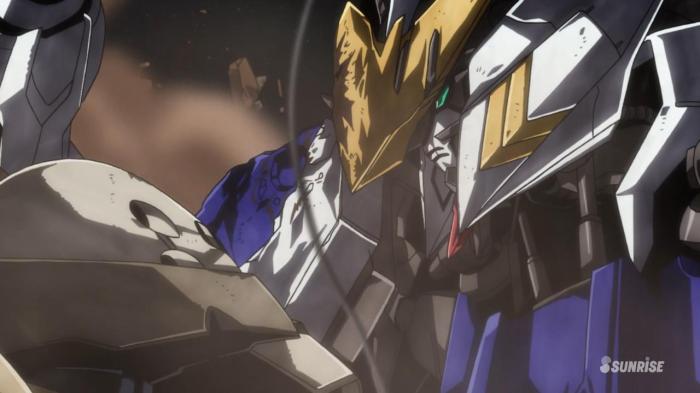 Tekkadan is attacked by the Turbines, a subsidiary of Teiwaz with a crew of lady Mobile Suit pilots.

The amount of pointless fanservice this week was groan-worthy. The first shot of the episode is of a half-naked girl sticking her legs and butt into the camera, there’s a completely ridiculous sequence where an underclothes-clad Kudelia is struggling to get into a space suit, and it takes a full third of the episode for the camera to decide to show anything above Amida’s poorly-covered chest and hourglass figure (though granted, she does appear in the OP). Speaking of Amida, her dialogue is as generically vampish as possible, in accordance with VA Atsuko Tanaka’s usual typecasting (Caster, Bayonetta), leading to several eye-roll moments when they cut to her for innuendo between robots bashing each other. 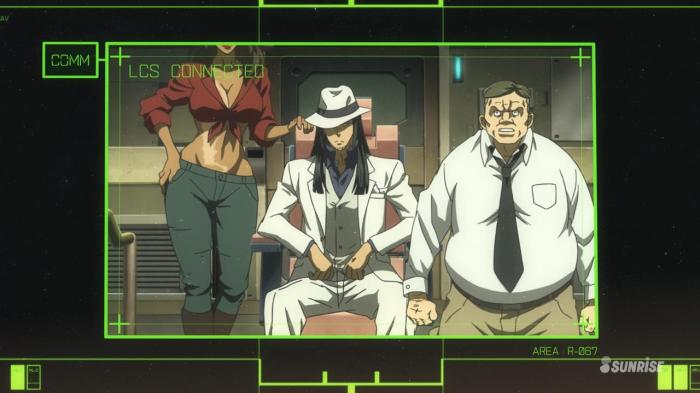 All that said, this was the best episode of Iron-Blooded Orphans yet. It’s the first time the show has had anything resembling actual tension, with the crew being forced into a battle against the very people they’re trying to lobby with, allowing the plot to move forward while having an action scene at the same time. Of course, Naze Turbine is conveniently the sort of generically chill guy who respects a good fight, and it is indeed a good fight. The idea of an all-female battle squad is a familiar one, even in Gundam (see Victory‘s infamous bikini attack), but the ladies do particularly well here, completely thrashing our heroes. Akihiro puts up a great showing, fighting off two Mobile Suits at once with sheer tenacity even as his Graze Custom gets wrecked to all hell. Unfortunately, the show makes sure to throw in a caveat that Gundam Barbatos wasn’t able to move at full capacity, because heaven forbid Mikazuki loses to a woman. Or at all, for that matter.

These are obvious storytelling basics, but stories tend to be more engaging when the heroes are actually in trouble and not just trouncing everything in their path. IBO has been building up the sense that at some point everything’s going to go to hell for Orga, but it’s impossible to tell if the scriptwriters are smart enough to actually deliver on that. As for Mikazuki, having him get helplessly dragged around by Lafter’s Hyakuri works because it’s a legitimate disadvantage he has to overcome with wits and gumption; having Barbatos be slowed down feels cheap because it barely got scratched while fighting four Mobile Suits in episode 5. It’s particularly noticeable since Barbatos gets fucked up this week, even losing half of the iconic Gundam v-fins. Still, if the plotting and pacing of IBO can stay at the standard this week set, then it might just cause my feelings on the show to turn around.