“The Terrifying City”
“The Ultimate Disciple”

The Heroes Association sends a task force to investigate the monster-filled hellhole known as City Z. Soon after, Class-S heroes congregate to protect the city from a giant meteor.

Oops, I’m late with this post. Sorry. I blame episode 6 being boring as hell. 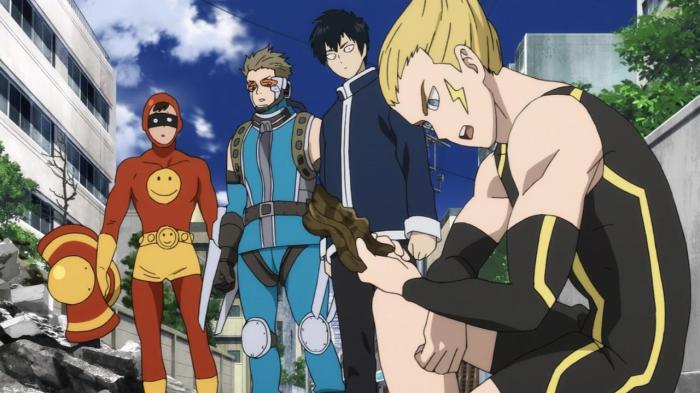 I mean, the show is never boring, but episode 6 is probably the closest One-Punch Man is going to get to straight-up filler during this season. It’s fun to see Sonic show up again to get summarily thrashed, but the entire rest of the episode focuses on the Heroes Association and a bunch of people we don’t actually care about. There’s a mild amount of novelty in seeing what kind of weirdoes pad out the hero ranks, but since every single one of them (yes, even S-Class) just exists to get their asses kicked, it really does across as just trying to fill time. Well, I guess you could say the same thing about the upcoming Deep Sea King arc, but that at least has some actual tension going on. We just don’t care about a walking kombu monster.

Episode 7 goes in heavier on the plot, using the apocalyptic meteor as an excuse to start rolling out the S-Class heroes, most of whom appear in the OP. Genos and Saitama’s odd-couple relationship is good for both laughs and emotion, and it’s nice to see our hard-assed cyborg buddy start learning to chill out. It’s also good to see Saitama show his hero chops while telling off the crowd; the past several episodes have basically been about him wanting recognition, but unlike most in the Heroes Association, Saitama knows that doing the right thing is more important than getting recognized for it. The manga omake chapters all show this way better than the normal story, but chances are we won’t be seeing any of those animated. Too bad.