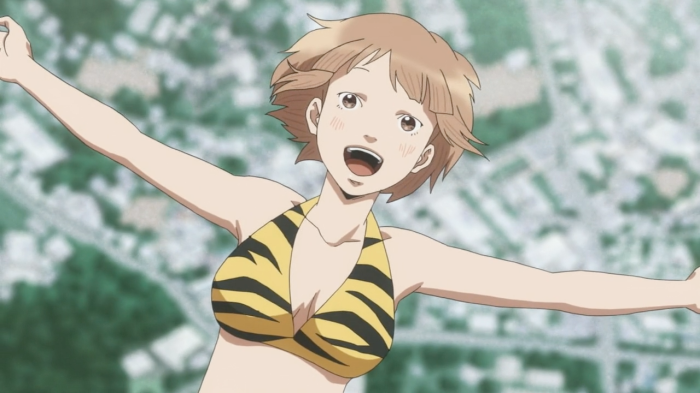 Thursdays at 2:00 pm EST on Crunchyroll

Saikawa talks to Shiki’s sister in hilariously terrible Engrish for ten minutes straight while Moe goes on a psychedelic lesbian dream adventure in her bikini.

Oh how Eden of the East has spoiled us with its immaculate casting. Contrary to noitaminA standards, The Perfect Insider is a lot less fortunate, as it apparently couldn’t even hire a native English speaker to voice a character who communicates exclusively in English. The result is a ridiculously awkward version of the show’s signature meandering dialogue scenes in stilted, robotic English that risks ruining the otherwise quite impressive script — in fact, I’d even say that the English dialogue in this episode was more idiomatic than Chrunchyroll’s usual subbing efforts — with unintentional hilarity. Yasayuki Kase and Yuko Aida clearly try their absolute hardest to sound believable, but it’s rather glaringly obvious they have no idea what they’re actually saying. That’s a bummer, because Miki’s testimony of sorts provides us with another interesting perspective on the enigma that is Shiki Magata. 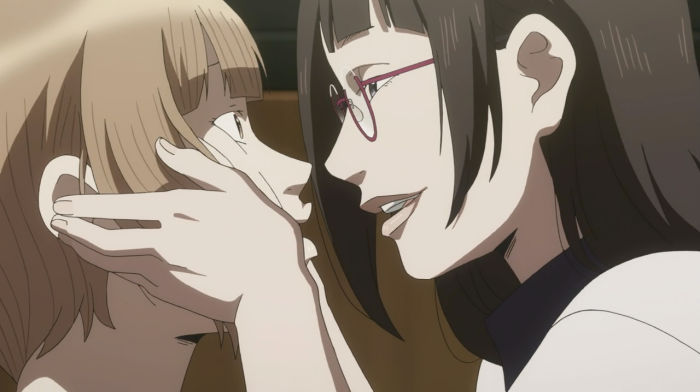 First of all, Miki’s account of Shiki’s personality — as well as the gruesomely disturbing flashback at the end of the episode — seem to stress that Shiki couldn’t care less about being killed and in fact, might even have desired death, either out of a suicidal tendency or even as she wanted her death to be part of a larger gambit. It would explain the frankly bizarre lack of security measures in her office, and the odd obsession she seemed to have with dolls, robots, artificial intelligences and all sorts of other ‘vessels’ she seemed to be inventing, possibly as a means of housing her different personalities. Whether the ‘Michiru’ Moe meets inside her cyberspace dream world actually is Shiki’s consciousness inside the computer or just a figment of Moe’s imagination, remains to be seen, but Miki’s confession seems to imply that it is possible, and that The Perfect Insider will be a lot more sci-fi than we’d envisioned it as.

Plato and science fiction go together like milk and cookies, so it’s no wonder Shiki’s worldview was nestled in the good old cave allegory. According to Miki, her sister was a staunch believer in the separation of body and mind, undoubtedly as a result of her having multiple ‘souls’ within a single body and her desire to be ‘free’ from any worldly attachments. In her conversation with Moe within cyberspace, Michiru implies that her virtual reality is the ‘true’ world, that the world we live in is restricted and filled with fake or fleeting information and that bigger truths can only be found in a more abstract world, a world of data. It’s all very similar to the teachings of Plato, who envisioned our world as a mere mirror’s image of the true world, which, according to him, consisted of abstract ‘ideas’. By separating their mind from their body, a ‘philosopher’ would be able to witness this world of ideas, and it would be their task to use their wisdom to drag the unknowing out of the ‘cave’ of our world, where only shadows exist, into the ‘light’ outside. With her experiments, seemingly creating other bodies for herself, or, as implied by Moe’s cyberspace adventures, an entire virtual reality that reads your mind, Shiki likely attempted to reach a platonic ‘enlightenment’ herself. Whenever we see her, especially in her conversations with Moe, she already seems to pretend to know everything, and has now started her attempts to enlighten Moe as well. Whether Shiki actually did obtain some kind of higher knowledge, or is simply a brilliant psychoanalist The Perfect Insider once again leaves in the dark, though we do get some nice closure on Moe’s backstory, which with some strong dialogue and grippling visuals actually manages to expose the whole ‘Moe killed her own parents’ implications as one big fat red herring without the entire subplot feeling pointless or anticlimactic — after all, it taught is some valuable things about both Moe and Shiki’s personalities and pasts.

Furthermore, this was by far the most visually interesting episode of The Perfect Insider to date, with brighter colours and bizarre Inception-esque imagery. The overabundance of conspicuous and cheap CGI remains as grating as ever, but the effect with the crumbling Legos is a very effective one, making the final scene one of the standout moments of the year. From the usually so colourful Moe desperately washing the blood of her darkly coloured mourning dress in a dimly lit bathroom to her confrontation with a seemingly ever-growing, distorted image of Shiki, Mamoru Kanbe has somewhat unexpectedly shown that you can in fact make dialogue scenes visually interesting without having to rely on your characters doing random handstands and flashing words across the screen. For just a few minutes, noitaminA was worthy of its reputation once again.

5 thoughts on “The Perfect Insider: Episode 7”