Hello, and welcome to All Your Monies, where The Glorio Blog’s resident toy and figure collecting crew (and Aqua) will run down the last week’s new pre-orders, turning a loving or scathing eye over what’s been put out for you to spend your hard earned cash on. This week we’ve got girls girls girls! Also boys. And rabbits, snakes, and hawks.

Zigg: I like Comet Lucifer a lot and I think Felia is a pretty entertaining character, yet I’m not digging this. Surprisingly, it’s not because of the partial nudity – I’d prefer it if she were covered up obviously but it’s not so explicit I can’t overlook it. No, the really big problem for me is the face, which is dour, unhappy and makes the whole ‘wrapped by wings’ things look much more uncomfortable than it’s actually meant to be. It’s a shame too since it’s a great, weird looking design and GSC have always excelled at crazy effects parts like these. I’d be seriously considering with Felia’s normal goofy grin, but as it is it’s 100% a pass.

Jel: On the one hand, really young looking naked anime girl. On the other hand, there’s some pretty cool stuff going on here. I love the soft green and purple color scheme and the swirling base… well, swirling everything makes for a really dynamic, attention grabbing figure. Not a fan of the sad face and as mentioned before, the nudity, but otherwise pretty interesting.

Aqua: Remember when we specifically praised Comet Lucifer for not doing the naked mysterious girl thing? If anything, I guess I can be happy the show limited its skeeviness to side materials, but the fact remains that this figure just doesn’t respect the zany retro charm of Comet Lucifer. First of all, Felia is looking sad, which is an absolute no-go for her character, especially when she appears half-naked. Secondly, the overdramatic swirly base attempts to look dynamic, but comes across as gaudy and cheap. I really hope we’ll get to see some better Comet Lucifer figures in the future (Felia in her cat bird onesie! Roman and Otto in their sweet hot rod! Moura!), because this is not the legacy of that show I want to be cast in plastic.

Zigg: This is perhaps the most blatantly beefcake-y thing we’ve ever had on AYM and I’m 100% down with that. It’s interesting to me that Chara-Ani is moving into this market, since they’ve traditionally been known for some pretty middling lady figures. This though looks very high quality bar the slightly boring pose. Still…those abs.

Jel: We get plenty of male figures at this point in Anime Figure History, but rarely do we get ones that are as blatantly sexualized as their female counterparts. Leave it to Free to break the trend. I could be all “we should treat them both equally!” in the name of ethics in anime journalism, but look at those abs. The rest of the figure would be kind of boring otherwise, but the colorful underwear and water gun add a touch of fun. Really the only complaint is this should have been done by Alter as part of their Free line. The quality is OK but the sculpt looks kind of… squishy, for lack of a better term.

Aqua: Unf. It may have been a while since I last professed it on this site — it’s not exactly the most interesting show to cover — but I love me some Free!, not only because it’s actually a good show, but of course also because it’s a fascinating insight into the double standards of anime fanservice. Anyway, this isn’t exactly the best Free! figure I’ve seen to date, but Chara-Ani have done a satisfactory job, with the splendid sculpting on Sosuke’s abs being the predictable highlight. The weakest aspect of their effort in my opinion, is the pose. While an energetic action pose with the water gun wouldn’t exactly fit the character, the pose they did go with is both too stiff to be nonchalant, and too casual to be full-on cheesecake. On the other hand, holy crap those abs.

Zigg: We regularly take Alter to task for their slow rollouts and less than ambitious figure choices, but when the company decides to bring it they still bring it like nobody else. This is top to bottom a gorgeous figure, bursting with detail, colour, a dynamic pose, and top notch craftsmanship. The contrast between sexy lady in red Velvet and small bunny in blue Cornelius makes for a bravura piece of design and as ever Alter’s attention to the smallest things is unsurpassed – check out that rocky base or the detail on the chain links. Essential.

Jel: Alter plus Vanillaware has created some of the most memorable figures of all time and the latest take on Velvet seems to fall right in line. Everything about this is stunning. Top notch sculpt, colorful, unique character designs, great pose, great base… it’s everything you could want in a figure except maybe some pants, but I think we can let that slide for now. Buy this to distract yourself from the fact that Odin Sphere is a fantastic art project and a terrible video game.

Aqua: Oh hey, it’s a reminder of back when George Kamitami actually designed characters for a beautiful fairytale world, and not for the cover of a low-rate porno DVD! Anyway, here we see a bunny dude with a sword and a snake woman with a whip chain thing. Velvet’s pose and visible nipples are still absolutely eyeroll-worthy, but I do love her cute sorcerer’s hood, and Cornelius strikes that perfect balance between awesome and adorable. The contrast between the two characters makes for a sight to behold, and as ever, Alter have done a great job at replicating the gorgeous, hand-painted art style of Vanillaware games, so I guess we can let the questionable gender politics slide for once. Speaking of which… 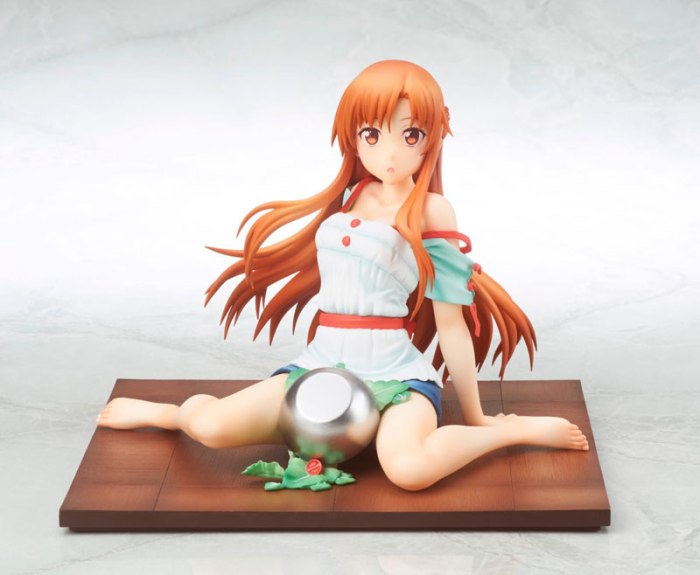 Zigg: Dear god that face. Amiami provide an exclusive smiling one which is less utterly gormless but then looks totally out of place with the pose. I suppose from a distance this could be a little cute but considering SAO‘s history in figures and what we know about Asuna the character, it’s definitely pandering. That and the sculpt quality looks to be no better than average.

Jel: I’m going to be “that guy” and remind everyone that Asuna has a maxed out cooking skill so this doesn’t make any sense, as if the SAO didn’t do a good enough job of robbing Asuna of her self worth to begin with. Maybe the salad bowl is there to protect her chastity so that your precious waifu remains pure. Yikes, I’m feeling pretty salty today… anyway, it’s still not the worst Asuna we’ve had in AYM by far, so Asuna Stay In the Kitchen Ver. might not be a bad choice by comparison.

Aqua: This abominable piece of garbage wouldn’t be half as atrocious as it is if it weren’t a reminder of the fact that even if Asuna is supposed to be one of the best players in all of Aincard, she still maxed out her cooking stat so she can cook for Kirito like the girly girl she is but she is still clumsy because she is a cute clumsy girly girl girl girl why the fuck did the salad bowl land exactly on her crotch why are you looking at me like that Asuna I can’t help it they are treating you this way I’m sorry I cannot save you is this my punishment

Zigg: GSC’s Monogatari figures have been some of their best work throughout the company’s recent history, and this one is no exception. Nadeko herself is great, what with the flapping dress and streaming hair, but the surroundings are the real star here. That gorgeous wood texture on the donation box, the loose bills, the meticulously detailed bottles, it all adds up to a striking diorama and a terrific look. Even the slightly disturbing smile is spot on.

Jel: I TRIED TO TELL EVERYONE SHE WAS CRAZY AND NO ONE LISTENED. Oh, and this is actually a pretty great figure. So much murder and under age drinking. Now someone please make a joke about throwing money at Shaft.

Aqua: I gave up up on Monogatari ages ago, but if this means Nadeko has gone cuckoo-bananas, I have to congratulate the show on daring to confirm what everyone knew ages ago already. Except for the paedophiles. Anyway, this is yet another one of Good Smile’s beautiful dioramas based on vofan’s gorgeous artwork, and should be an instant buy for every figure collecting Monogatari fan (you monster), with its original base, great attention to detail and delightfully disturbing facial expression.

Zigg: From the sublime to the ridculous. 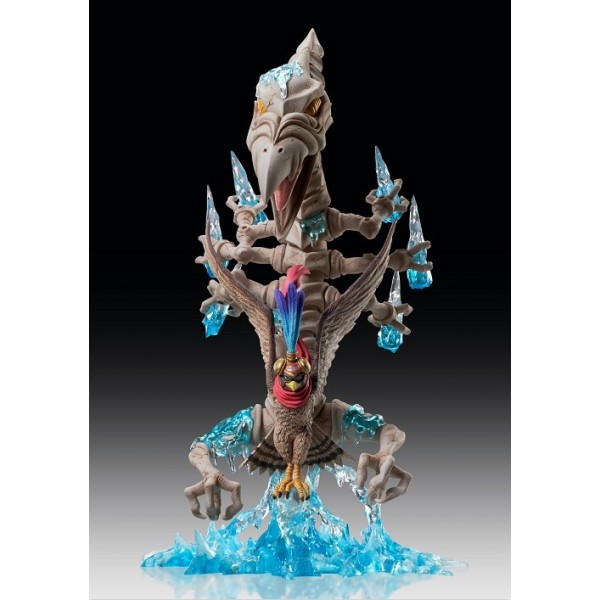 Zigg: This costs way way WAY too much and is fundamentally an utterly ridiculous thing to own, but man does it look cool. I needed a palate cleanser after that awful Shinobu and few things do it better than ‘crazy hawk with giant skeleton ice monster’. I’d never buy this but man I’d take it without a second though if you gave it to me.

Jel: OK this is bizarre even for a series that has “bizarre” in the title. Is this someone’s stand or something? Where are the fabulous muscular men doing fabulous poses? Wait, does the bird have a stand??? (Zigg’s note: Yup) WHY DOES THIS COST SO MUCH MONEY?!?!? Seriously though, some impressive work here with the detail on the wings and bones and blue crystal effects that don’t look terrible. That is a lot of cash to pay for a horrible bird skeleton monster though.