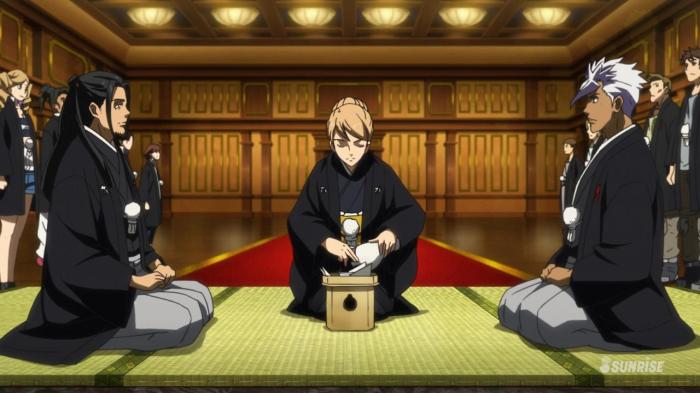 “The Form of Closeness”
“Sakazuki”

Having impressed the Turbines, Tekkadan is taken in by Teiwaz. Meanwhile, the group struggles with questions of family and duty.

I repeatedly find myself wishing that Iron-Blooded Orphans would just pick up the pace already, but I’d be lying if I said I didn’t enjoy these past two episodes on some level. A lot of the exposition is still quite clunky and on-the-nose, which may just be a trait of anime writing in general. It’s a tough problem to have for a show that spends as much time standing around and chatting as much as Iron-Blooded Orphans, but it has been getting better. There are (finally!) some legitimately good moments of characterization going on, and while it all feels like it should have happened ages ago, it’s still nice to see it happening period.

Naze (or Totally-Not-Fellini, as anyone who watched Gundam Build Fighters would immediately think) and his very literal harem are a strange addition to the cast, and it almost feels like the writers realized they had a sausage-fest going on and needed to shoehorn in more ladies… by making them all the lovers of a single man. I can appreciate that they’re the best Mobile Suit pilots shown so far, repeatedly schooling both Mikazuki and Akihiro in the training sims, but the sheer amount of innuendo that has been thrown around as a result of their presence has been tiresome. Basically none of the aforementioned good characterization applies to them, and Episode 8’s segment of all the women literally playing with their babies while the men talk business was laughable. Naze himself seems decent enough, albeit cliche, but all his pontificating about family and responsibility takes on a bit of a questionable tone considering that his entire crew literally consists of his lovers and children. 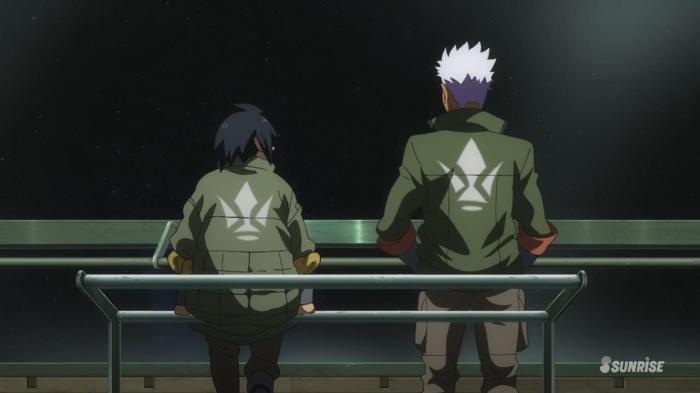 It’s fitting that Orga and Mikazuki receive the bulk of the development, seeing as they’re the two main characters, although I’m not sure I’m impressed because it was actually good or because G-Tekketsu has set a low bar in the past. Orga’s gung-ho attitude has always felt like bluster, and these episodes have him dropping the act a bit. He’s just a kid in over his head, scrambling to be a leader to his bros, and he clearly wants to imitate Naze’s casual authority. When complaining that Naze “treated him like a kid”, he’s embarrassed, not angry, and when Naze suggests letting the crew go on shore leave he’s willing to spend all of Tekkadan’s profits to party just to put up a good front.

It’s tough to tell if Mikazuki’s line about having to try hard so he doesn’t get ditched was meant to be serious or a playful barb, but I’m inclined to think the former, if only because Mikazuki has never dropped his deadpan honesty. I’ve said previously that the show needed to further explore the two’s relationship, and this gives Mikazuki a more tangible reason to be grumpy about losing Episode 7’s battle. Apart from that, there are the smaller scenes like him taking care of Orga after the party and being excited about their names sharing a character. He also rather frankly mentions the first time he killed someone to Kudelia, which can be inferred to be the flashback in the first episode, wherein he’s presumably protecting Orga.

Anyway, let the record show that it took nine episodes for G-Tekketsu to actually get started on what it billed as its main plot. For a two-cour anime, that is a worryingly slow start, and it doesn’t seem like the show has any intention of hitting the gas anytime soon. It does seem to slowly be getting into a proper groove though, so I hope that it can at least stay decent from now on.