Hello, and welcome to All Your Monies, where The Glorio Blog’s resident toy and figure collecting crew (and Iro) will run down the last week’s new pre-orders, turning a loving or scathing all-seeing eye over what’s been put out for you to spend your hard-earned cash on. This week we have a lineup of powerful warriors. And Heero Yuy. And a chef.

Zigg: I’ve never really been down with the concept of Zero Suit Samus in general, since it mostly seemed to be an excuse to take one of gaming’s very few iconic female characters and stick her in a catsuit. With that said, this is a pretty good rendition of the design, and would act as a nice companion piece to the (far superior) Varia Suit figma. That price seems ludicrous for a figure this simple though, so it’s an easy pass from me.

Jel: Joints and seams aside, they did a pretty good job making the figma emulate the full scale version. Too bad they’re sticking with the Other M thing though. I can dig the short hair alternate look but does anyone know/care about Adam’s helmet?

Iro: Metroid: Other M is a bad game (thanks Sakamoto) and this seems a bit dull for a figma. The joints are a bit glaring, particularly since they look fine on Power Suit Samus, but I suppose it could be worse. Overall, this seems like some perfectly boilerplate merch to squeeze a little more money out of a popular character and her ruined characterization.

Zigg: This is cool looking and I love the raggedy texture they’ve managed to get on the gi, but he just seems a little too chunky here, with massive feat and a slightly too small head. Though Ryu’s a ripped dude, he’s not Zangief or Hugo levels of comically oversized so I’m a little upset they decided to go full Rob Liefeld on the physique (minus the actual feet of course). Very cool then bu not quite what I wanted.

Jel: Street Fighter III is old news, I demand Hot Dad Ryu. Actually, is there really much connection to III other than them telling us? (Zigg’s Note: The bag is the main thing, but also the facial design) I’d prefer a more stylized look if they wanted to go that route, otherwise they might as well say this is from V and call it a day.

Zigg: This is a relatively pedestrian figure but it’s difficult not to include it after the marvelous adaptation of Tonio’s arc in the anime. I love the little Peral Jam avatars over the plate of food, and it’s nice that they kept the price very low for a scale figure these days. Definitely a fun little curio.

Jel: Man I am way too far removed from JoJo to have any idea what is going on here. Based solely on looks it’s kind of a boring figure. The orange shoes and whatever is going on with the plate is nice bit of visual flare, but otherwise I don’t see this happening unless you know and appreciate the character.

Iro: The “Let’s Go Eat Some Italian Food” bit of Part 4 just aired, and as mentioned there it’s one of my personal favorite parts of Diamond is Unbreakable. This seems like Just-Another-One-Of-Those-Di-Molto-Bene-JoJo-Statues, though. I guess I like the detail of the creases in the clothes?

Zigg: This is a gorgeous, gorgeous figure. Longtime readers will know my weakness for massive swathes of billowing cloth and this doubles down with both Sakura’s dress and that lovely shawl to boot. The pink/red colour mix is very striking and the way the design ‘wraps around’ into a rough circle is a great touch that enhances the feeling of flow and movement considerably. Unfortunatley such quality comes at a hefty price, and Sakura wars is obscure enough for me not to know the source material, but it’s stil a joy to behold.

Jel: It’s a nice figure and it’s cool to see a cult favorite character outside Japan, but meh, not terribly excited. I will say I’m impressed with the detail and sculpting on her cloak thing, but I’d be much more interested if she came with her mech in some capacity. 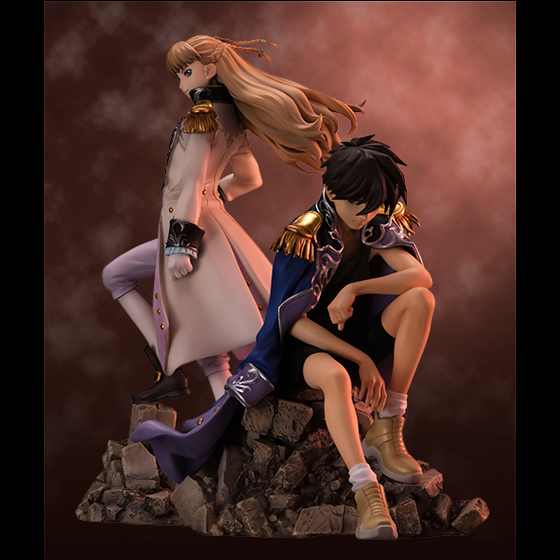 Zigg: I really like the contrast between these two – glamorous, proud Relena and super sulky, brooding Heero. They really complement each other well, which is why it’s kind of a shame they’re being sold separately rather than as a single diorama. The huge price bump on exclusives always makes them hard to recommend, but this is certainly some of the best stuff to appear under that tag recently, so I can definitely see big fanss springing for them.

Jel: This is so 90’s it hurts, right down to the attitude. Love it.

Iro: I still haven’t seen Gundam Wing, though I’ve considered checking it out. About all I know is that it was the first big one to air on Toonami, leading scores of 90s kids into the world of giant robots and fujoshi. Oh, and I guess there was that one guy on Japanator who used “Heero Yuy” as his handle way back when?