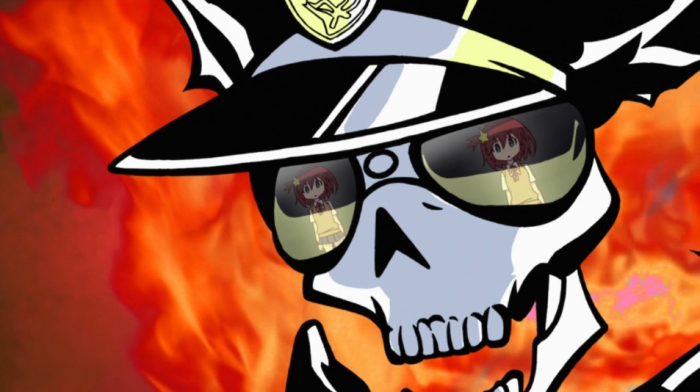 The Roundup is heating up as Luluco getts the cameo we we’ve been waiting for and Tanaka-kun carts out the “summer episode”. I suppose there were other shows too but hey, Inferno Cop!

The Roundup is a weekly guide to all the “other” shows we’re watching this season. Check out our full coverage of:
Macross Delta | Jojo’s Bizarre Adventure: Diamond Is Unbreakable | My Hero Academia | Kiznaiver |

Jel: As if I needed more ammunition for my argument that Bakuon has turned into K-ON!, I find it hilarious that Chisame even has the same family name as Azusa. It’s not a terribly unusual name, but even so that is quite the coincidence. As exepcted, she’s also starting to hijack the show as the rest of the cast settles in as her weird senpais. This episode was fine I guess but I am really missing the gold ol’ days when this show was hilariously bizarre. The best we got this week was seeing all the driving instructors are some kind weird robot puppets or something. What’s up with that?

Bakuon!! – This show does always get the details right.

Artemis: That was, if not the best episode of Joker Game to date then at least one of the best. Certainly it was the most we’ve gotten in a single episode in terms of character development – one of the coolest parts (or alternatively most annoying, depending on your point of view) being that we couldn’t tell which details were real and which were pure fabrication. Even the person who was instructed to tell the story could no longer differentiate between fact and fiction – and if that’s not the very essence of living your whole life as a spy then I don’t know what is. I think this show has a bad habit of spoon-feeding certain pieces of information to the viewer via pointless monologuing instead of just visually showing it (for example, we really didn’t need Price verbally explaining that he had hidden the information inside his ring), but otherwise this week’s episode put Joker Game solidly back in my good graces. If every episode was as subtle and succinctly told, I’d like the overall show a lot more.

Jel: We’ve been talking about Inferno Cop showing up for weeks so no surprise there, but did anyone expect his cameo to be a quiet heart to heart chat? I’m not sure if I’m disappointed we didn’t get something dumb and crazy or impressed at the show’s restraint. Acknowledging the similarity to Over Justice was a nice touch, as was the fact that they completely cut Luluco out of the OP. Gotta love the details. As for the plot itself, glad to see Luluco finally passionate about something. I just hope this leads to some kind of ridiculous, unforeseen resolution, I can only take so much of Trigger mellowing out.

Artemis: Whenever Tanaka-kun puts out an episode lacking in originality, I can at least be assured it’ll make up for that in cuteness. Plus (and I know I say this all the time but that doesn’t make it any less true), Tanaka-kun is just an insanely nice show in which everyone basically just goes around being nice to each other – and I’ll almost never turn down a generous helping of the warm fuzzies with my anime. I did really like how the obligatory pool scenes had nothing to do with girls in bikinis and everything to do with kids embracing their inner listlessness, and seeing the part-timer again from the previous episode made for an amusing cameo. Then the second classic scenario of the genre, the ever-popular summer festival, actually managed to be pretty darn adorable and even nostalgic along with its comedy, so bonus points there as well. I suspect that Echizen and Ohta make for a very popular pairing among viewers and I can certainly see why – though that doesn’t make Echizen’s friendship with Miyano any less awesome (or Ohta’s with Tanaka for that matter).

Jel: This week in “Jel Tries to Find Something to Say About this Show”… I thought it looked a bit nicer than usual? The animation seemed more consistent and on model than we typically get I guess? There were a couple decent jokes too. Teasing Nishiyama is always fun, I probably laughed harder at “APOLOGIZE TO CHRISTMAS!” than I should have. Some of the Worst Slumber Party of All Time bits were kind of amusing too. Not a bad episode but still pretty boring, I’m just coasting through the last couple episodes at this point.