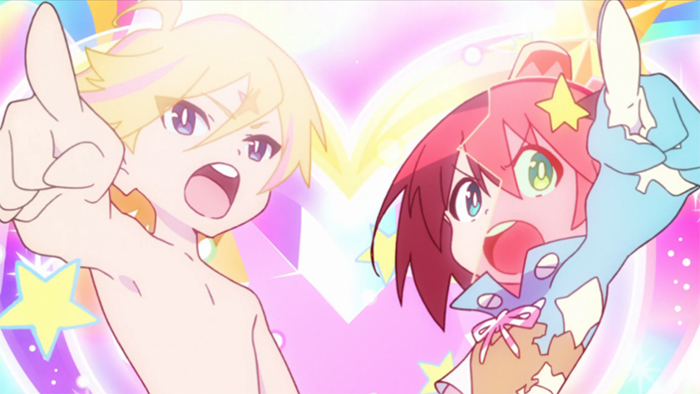 Most every Roundup shows airs their penultimate episode with no sign of the end in site. Seriously, it’s completely business as usual and I have no idea how any of these shows are going to find a stopping point. At least Bakuon!! is weird again.

The Roundup is a weekly guide to all the “other” shows we’re watching this season. Check out our full coverage of:
Macross Delta | Jojo’s Bizarre Adventure: Diamond Is Unbreakable | My Hero Academia | Kiznaiver |

Jel: The second the “Suzukiphilia” bit started I knew we were getting the kind of weird I’ve been craving for weeks now. Memorable moments like Rin walking in on Onsa, the sumo wrestling, and Chisame’s dad moving his mole to her face were all pretty great. Even Chisame herself had to ask what was going on at one point and I loved it. I enjoyed the more conventional opening bit too. Having several friends that are seriously into biking, I knew right away the type of annoying they were going for. One final note to further my K-ON! connection conspiracy theory: The cat pose Chisame makes in her license photo is identical to the famous one that Azusa makes in one of the K-ON! bonus episodes. Yet another detail too specific to be coincidence.

Bakuon!! – I want to see Hane crane kick someone.

Artemis: This was another pretty decent episode of Joker Game. I only wish it had taken place far earlier on in the series. Having one of the guys from D-Agency die – no miraculous recovery, no body swaps or other tricks, we’re talking actual death here – is something the audience should have seen long ago. Not necessarily because of incompetence but because even with the best-laid of plans and the most resourceful of men to carry them out, not everything can always go perfectly. People make minor slip-ups all the time and failing that, accidents happen that have nothing at all to do with skills or smarts and everything to do with coincidence or luck. It would’ve added a lot more tension, not to mention good old fashioned realism to the series if the audience had seen somewhere nearer the beginning that no, our spies were not in fact invincible. As it stands I feel this was a little too little, too late even if it worked quite well as a standalone episode.

Jel: This was the exact kind of insane escalation I both wanted and expected, and yet knowing that did not make me enjoy it any less. I have a strict “No making FLCL comparisons” policy but between having a lot of the same staff and the fact that Luluco is dealing with her first love, I couldn’t help but get similar feelings watching this. Of course there was also a healthy dose Gurren Lagann and general Imaishi touches like Luluco standing cross armed on the bow of the ship, but again, this is all about the love! I really wished this could have been a full length episode so we could have seen more of the battle and had a bit more time for Nova’s transformation to sink in. Still, Luluco’s confession managed to be sweet and poignant in the time allowed and I can’t wait for SEASON 5.

Jel: Yet another classic anime staple gets the Tanaka-kun treatment. I actually thought the first half of the episode was kind of dull as they set up the haunted house, and Tanaka’s laziness was just starting to cross the line into annoying. I mean, he basically left taking a nap in a box to go find a place to take a nap in a box, that seems excessive even by his standards. The magic happens in the second half though as Tanaka’s deadpan reactions to the festival are priceless. This show has a knack for finding the perfect moment for a long silent pause, as was the case when he runs into Maid Cafe Echizen. Probably not the best episode overall, but still a fun, relaxing experience as always.

Jel: The girls celebrate Valentine’s day exactly the way they celebrate christmas: doing exactly what they always do. Tease Nishiyama, out eat the blue haired kid, everyone goes and helps out at the cake shop… it’s getting infuriating how copy and paste each episode has become. Sure there’s some neat animated bits that are entertaining as a fan of the technical aspects, but really the only thing I’m looking forward to now is getting past the last episode and wrapping this up.