The First Looks have finally ended and we are finally fully staffed, so let’s get back in to the Roundup! Looks like we’ve got another batch of easy going comedies this season with just a touch of sadness and dash of violence to keep things interesting. What shows could I possibly be referring to? You’ll just have to read on and find out.

Jel: So we all know this show is cute and I don’t need to say that explicitly every week, right? I’m more interested in talking about the elephant in the room: the relationship between Kouhei and Kotori. We’ve all been concerned this was going to go into some kind of romance territory and while I have it on good authority (Aquagaze) that the manga doesn’t go that route, you never know with adaptations. I appreciate they are addressing it’s kind of a weird situation and it’s interesting how careful they are to set boundaries. There are rules in place and even at school they only talk through the window. I’m further encouraged by episode 3 focusing a little more on Kouhei being a dad than whatever is going on with Kotori. So maybe we really will avoid a creepy romance angle after all? I certainly hope so. 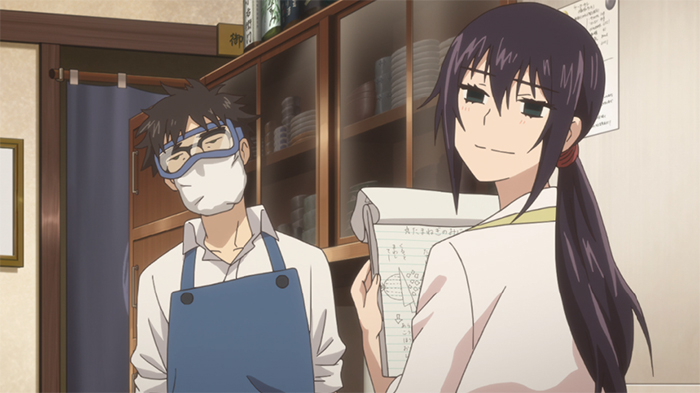 Artemis: Far be it from me to look to anime – let alone sports anime – for my regular dose of realism, but Sho has a pretty valid point about not wanting to join a team of amateur cheerleaders who are more likely to seriously hurt themselves than anything else. (Seriously, it beggars belief that nobody’s thrown out their back or dislocated a wrist yet. In real life, without a professional coach these guys would be screwed.) But hey, anime being anime aside, this is still a fun and yet remarkably mature series with a cast that’s really coming into its own. Mizoguchi’s still the odd one out as far as I’m concerned – his oddball mannerisms just aren’t funny and don’t seem to gel well with anything else about the show in any case – but Haru and Hashimoto still have their nicely understated bromance going on, and that’s echoed by the relationship between Gen and Ichiro, where the humour does actually work. (I admit it, the onsen scene with everyone teasing the hell out of Haru had me laughing. Aki! Fuyuoooo! Natsuhiko!) There’s a genuinely great team dynamic going on here, and one that strikes me as being surprisingly convincing to boot.

Jel: I’ll probably be spending most of the season trying to figure out why I like this show. The dumb premise makes Uchimaki insufferable, and I don’t like the way the show abuses poor Mizuki. Seriously, can we just elimnate all anime jokes about panties for all eternity? Still, there’s something about the overall sense of humor that I like that I can’t quite put my finger on. For now, let’s just say I like the details. For example, I love how Mizuki and the president were holding tiny bushes on a stick as bad camoflage when spying on Uchimaki. I find little unnecessary things like that charming, and I hope we get more.

Jel: I have to be honest, I primarily added this show so I could have a reliable source of screen caps for the Roundup. Between Pikari’s constant muppet face and the gorgeous setting, episode 2 did not disappoint. That said, it might be a challenge to find something to actually say every week. I’m guessing every episode will be Pikari making Teko do something mildly reckless and then they have some pretty, life affirming moment while blushing at each other toward the end. This week just happened to be first step toward getting Teko into scuba diving, which I guess is our only hope for any hint of a story. I’m not complaining mind you, I rather like the laid back mood and it’s all very well executed. But we will have to see if there’s enough here to write about.

Aqua: One of the few overdone anime tropes I actually like is that of the chummy young teacher who acts like one of her own students, so yeah, I didn’t mind this episode’s ridiculous chase scene in the slightest. The clear chapter division between the two halves was a bit jarring, but it’s a lot to ask for a show as inherently fleeting as Amanchu! to have anything close to a thread tying all its vignettes together. Not that it really matters, though. Amanchu! perfectly fills up the gasp Flying Witch left behind with its gorgeous vistas and slightly quirky edge, and it actually teaches you stuff, too! Sure, no one cares about the difference between a wetsuit and a drysuit, but, eh, I guess it gets points for trying?

Jel: I was worried this show was going to do the annoying thing where the characters live in a dangerous, violent setting but they keep coming up with convenient ways to avoid anyone actually dying. It’s almost as if Vanno, who I’m guessing didn’t actually shoot Serpente, represented that notion and was promptly snuffed out. Feel free to add your own theories in the comments. Further, I thought they were going to paint Bruno as the cool, unstoppable anti-hero but so far it turns out he is just a cold, slightly insane murderer. Basically, they are fully on board as a mafia revenge story and while that normally wouldn’t be my thing, it’s presented so well that I’m really enjoying it.

Artemis: I’m likewise pleased that 91 Days seems committed to writing an actual mafia revenge story as opposed to an anime about the mafia in which nobody but the random minor henchmen ever die – or worse, a story in which people die overly drawn-out deaths complete with plenty of dramatic foreshadowing and enough blood and guts to make it all seem ‘dark’ and ‘adult’. Thus far though, the show’s mostly steered clear of cheap theatrics and is successfully navigating that difficult space between Not Enough and Way Too Damn Much in terms of its onscreen violence. If I’m wary of anything it’s that the series will end up taking itself a bit too seriously – while I definitely don’t want an attempted copy of Baccano’s wacky comedy, it’d be a shame if 91 Days was utterly devoid of a sense of humour. Still, early days yet.

Marlin: I’m falling in love with this show. It has crafted a beautifully melancholic atmosphere that has yet to disappoint with its character development. It’s already been three episodes of the same premise (I.e. preventing one of future Naho’s regrets), but it hasn’t grown stale, and the impact hasn’t lessened. I love that everything doesn’t turn out perfect. Naho is still herself, prescient or not, and her own personality will inevitably get in the way of her motivation. It was like looking in a mirror, seeing her struggle so hard to make a decision that the moment to make it passes her by. It also doesn’t feel cheap that she’s given a chance to redeem herself, as it’s obvious Kakeru wants attention from her too. I also love the idea that her changing her decisions is having impacts that depart from the future regrets. I’m waiting for the moment when she has changed the future so drastically the notes can no longer help her. At first I was disappointed that, after learning the fate of Kakeru’s mother, he died in an “accident”, but the new revelation that it may have been suicide as well puts a much more mature spin on this that anime rarely ever tries to tackle. It’ll certainly be interesting to see how he handles dating Ueda after getting a clear message from Naho too late.

Artemis: My praise isn’t quite as glowing as Marlin’s because while I very much enjoyed the first two episodes of Orange, episode three was a bit of a step down for me. Until that point, the series had me nearly fully invested in its quiet sense of drama – it was subtly moody rather than melodramatic or exaggerated, and that always gets my approval. While I didn’t outright dislike the third episode, the introduction of The Other Woman (along with all the clichés that usually entails) made me instinctively pretty wary, and the flash-forward to future Naho and co. was similarly a lot more emotionally overstated than what we’d seen previously. (And as an aside, the sexism also had me giving this episode the side-eye, though to be fair that’s more a cultural thing than an anime-specific issue.) Having said all that, I’m still enjoying what’s largely a nicely written and visually well-crafted show here, and I’m not about to throw in the towel because of some still relatively minor annoyances.

Aqua: What an odd show this one is. On one hand, it feels like we’ve known its characters for ages, while at the same time Orange‘s casual vibe is constantly undermining its own tension. Things happen, but they never feel mayor, to a point where three episodes in, we still have no idea whether Naho heeding or ignoring the letter’s warnings has any impact whatsoever. Orange is a plethora of brilliant bits and bobs that somehow still haven’t worked out how to operate as a whole. Another example: the general passivity with which Naho undergoes her surroundings cleverly highlight her extremely submissive nature, yet in stead of making it come back at the worst possible moment time after time again (see: Evangelion), Orange has seemingly already accepted Naho’s failure as fact, drenching itself into a permanent sense of fatalistic depression (see: Evangelion 3.33). That’s a bold, meaningful way to present itself, but not necessarily a very engaging one. Luckily, the back half of episode 3 seems to be a turning point, with some very grim implications about Kakeru’s future and a development that might just be the much-needed wake-up call that will push Orange from its morose lull into greatness. It’s not that what it does isn’t good, it’s just that it could be great if it were a bit more willing to question itself and what it’s set out to do. If that doesn’t make sense, don’t worry. I’m just as confused about how I feel about Orange as you are.