During Totally-Not-World-War-II, the princess of Totally-Not-Switzerland works to protect her country from Totally-Not-Nazi-Germany. This includes saving and befriending the eponymous Izetta, whose magical powers will almost certainly be the key to ending the war.

I’m so used to anime being a certain way that I can’t help but be wary when it isn’t, and I can practically see Izetta falling apart at the seams and going back to safe anime waters within as much as one episode. The writing already falters, wasting our time and sanity with a pointless shower scene and threatening the female protagonist with rape, both cheap shortcuts to make the audience care about what’s happening. It’s a pity, since what’s actually here is interesting. Even though the setting is patronizing in its transparency, it’s a strong backdrop for what could be a character drama or a story about political intrigue. Unfortunately, Izetta could just as easily lapse into Finé and the eponymous witch being not-quite-lesbians for 12 episodes while nothing else of consequence happens. I just can’t know for sure without watching another couple episodes, and sadly that might as well be a ringing endorsement these days.

There’s a lot of things to like about Izetta – the excellent art, the compelling political drama, and the pleasant surprise of a strong, well paced opener that concentrates on world building and doesn’t unleash its supernatural elements until the closing stages. Why then am I left so underwhelmed? I think it’s for the lack of a better word how sanitised all of it feels. As smart as the show is, you can sort of feel the residual anime leaking in at the seams. For me the biggest disappointment is the need to transpose the story to a supposedly ‘fantastical’ setting. I understand World War II is a thorny issue for Japan in particular, but I’d really hope the show’s audience was mature enough to accept an actual historical setting rather than the meekly watered-down version we’re given here. It just dulls the edges of what should really be a real-world story, and it’s not like fantastical stories set in the period are uncommon. There’s also the tired insertion of fanservice elements where they’re absolutely not needed, a horse we’ve beaten so many times it’s probably turned to dust by now. Still, the Ghibli-esque final sequence, with Izetta saving Finé in a mid-air tumble, is an exciting and striking note to end the episode on, and bodes well for things to come. I just wish the foundations weren’t so shaky. 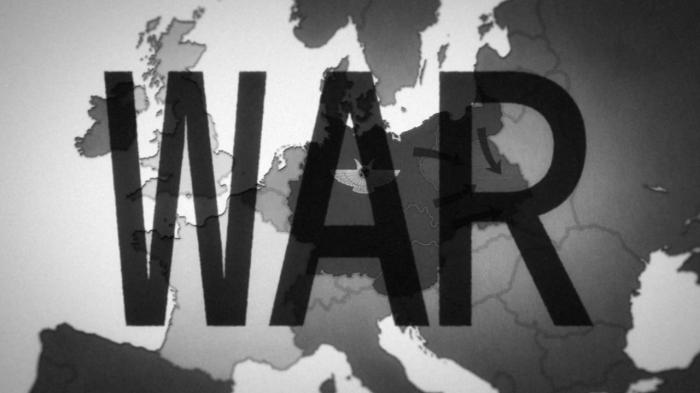 Anime and World War II usually go together like water and oil, so it’s a good thing Hiroyuki Yoshino set his new opus in an entirely unrelated war between a bunch of definitely fictional countries in on an unspecified continent that is most certainly not Europe. It’s rather silly, especially given how Izetta’s idea of alternate history seems to be ‘history, but with the serial numbers filed off’, but as long as the glorious nation of ‘Bushido’ doesn’t swoop in to win the war and definitely not commit various heinous war crimes, I’m willing to overlook its bizarre take on an event that could still do with a bit less whitewashing on Japan’s end. It helps that Izetta, The Last Witch got off on a perfectly decent start. Its many lush, gorgeous vistas and detailed potpurri of 20th century aesthetics bring to mind Yoshino’s mercurial yet thoroughly atmospheric So-Ra-No-Wo-To, while the tense action sequences are quick to quench any worries this might just be another dolled-up slice-of-life dramedy.

At its best moments, Izetta feels more like a nerve-wrecking political thriller than the supernatural fantasy it is, and by unleashing the titular witch only at the very end it doesn’t so much mislead viewers as eases them into the story’s grander scope. Compared to the blunt exposition and inane technobabble most anime open on, a relatively clear impression of who’s who and what’s where is a breath of fresh air, and the writing is noticeably lacking in hackneyed shortcuts a la ‘tell, don’t show’ – especially coming from Yoshino, the man behind some of the biggest train wrecks in anime history. So imagine my surprise as Izetta manages to not only make a right amount of sense, but boast a clever, courageous and resourceful heroine to boot. Obligatory shower scene and unintentionally unambiguous rape threat aside – something I’m tired of criticizing but must point out for the detriments they are –  Princess Finé strengthens Izetta‘s case with every second she appears on screen, using her wits and unwavering dedication to her cause to fight for her country against overwhelming odds.

Our other main character, on the other hand, I’m a bit more worried about. Only if Izetta characterizes its title character as assertively as her co-star and fleshes out their relationship beyond ‘you were nice to me once so now we are contractually obliged to act like a couple on honeymoon’  – hey, another lousy, regressive cliché I’m too tired to rant about! – will it be able to live up to its potential. Given the pedigree of its writer, its less praiseworthy aspects and original anime’s general tendency to go horribly wrong by default, I can’t exactly trust Izetta to rise up to the challenge without a more than healthy dose of skepticism. Though at the very least, this episode has given me a reason to hope.

Artemis’ verdict: This Is Why We Can’t Have Nice Things

I came this close to liking this episode. I’ll even wait until after next week’s to properly make up my mind. And I admit it, I was skeptical as hell going in because, let’s face it, this kind of synopsis speaks for itself in some of the worst ways possible. That should really be taken as a compliment, by the way – I’m ready to watch more of this show despite the fact that I’d already halfway made up my mind about it beforehand. I thought it would be terrible and not worth a second of my time, yet the MC was enough to prove my expectations mostly false.

I thiiink it’s possible to show a woman’s scar without involving a shower scene, and I’m preeetty sure it’s possible for a guy villain to prove his villainy without having to also imply the possibility of raping his captive… but clearly I’ve watched too many anime to be sure. While I did genuinely enjoy nearly everything else about this episode, my pleasant surprise at the actual story does not negate lazy writing or thinly-veiled excuses for fanservice. Sure, I’ve seen far, far worse but “I’ll watch it because I wasn’t grossly offended” seems a depressingly low bar to set.