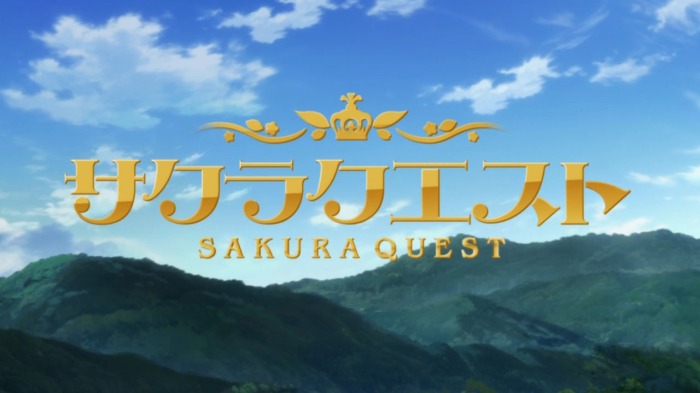 Soon to be fresh out of junior college, fashionista Yoshino Koharu struggles to make it in the boring world of the grown-ups – until one day, she gets an offer to become the spokeswoman for a sleepy countryside village. Golly gee willikers, could this perchance be a P.A. Works anime?

Aqua’s verdict: God Save the Queen

I’ve been in this gig for long enough to know that it’s pointless to try and base your expectations for a new anime entirely on the studio that’s producing it – unless the studio in question is Kyoto Animation, Shaft, or, indeed, P.A. Works. For a company that has the word “progressive” in its name, P.A. Works have ironically become all but synonymous with making the same show over and over again, despite their previous credits also including a couple of key projects, a horror story (Another), a mecha adventure no one watched (Kuromukuro) and whatever the heck The Eccentric Family is supposed to be. Nevertheless, virtually all of their original projects feature – in some capacity – small, sleepy villages, go-getter female protagonists, large ensemble casts spanning several generations and an undercurrent of cynicism amidst the usual do-your-best-and-let-convenience-handle-the-rest spirit that all but characterises anime as a whole. All of these tropes are visible in Sakura Quest from the get-go, but as the last time we saw them working together as excellently as they do here, resulted in our favourite anime of that year, it’s hard not to get excited.

Indeed, one glance at Sakura Quest is enough to bring back memories of Shirobako‘s brightest moments. There’s the stubborn bickering between cranky old codgers, the hints of all-too-human absurdity, and the honest portrayal of how people can find meaning and a worthy cause in something so utterly idiotic as the Kingdom of Chupakabura, Japan’s most transparent tourist trap. Like all of P.A. Works’ best, it peddles a more genuine, more pragmatic sense of nostalgia and small-town countryside charm, populated by flesh-and-blood humans, rather than anime archetypes. On the other hand, Sakura Quest just as much attempts to further fine-tune its studio’s established formula, be it with baby steps. Where Hanasaku Iroha‘s Ohana was still one of the blithe spirits of moe‘s heyday, and Shirobako‘s Aoi still kept up the pluck quite well for an underpaid errand girl on the verge of a nervous breakdown, Yoshino is mostly lethargic and just a tad bit spoiled, having dropped most of the patented P.A. Works can-do spirit in favour of a “please get me the heck out of here” attitude straight out of Kumiko Oumae’s playbook.

With a wholly unexpected subject matter and a protagonist unique enough to be likeable enough in her own right, Sakura Quest does more than enough to prevent the rot of formula from setting in. Along with its spiritual predecessors – and Girlish Number, the weird, drunk uncle of the family – it seems set out to create a new face for the slice-of-life genre: one that doesn’t focus (nearly as much) on the saccharine shenanigans of pastel-coloured nymphets, but provides tangible, lovingly sarcastic snippets of the world outside your window – a world filled with so much charming people and loveable eccentricities, you don’t need a trip back to the distorted bag of dated tropes that anime likes to call high school, to find magic in the mundane. In a genre where settings become ever more often mere vehicles for the otaku audience’s own biases and beliefs – case in point, this season’s Armed Girls Macchiavellism – that’s a humble ambition I can only admire.

I mostly know P.A. Works shows by reputation rather than having watched them myself (I am a bad man), and this seems to mark all of the check boxes with the rural town and excitable heroine and such. Maybe I was just coming off of Armed Girls Macchiavellism‘s lows, but I quite enjoyed this. There’s a sense of humanity in the characters, seen in minor arguments and simple buffoonery, that gives off a leisurely vibe without quite feeling overwrought or melodramatic. I’m not quite sure the P.A. works aesthetic is one that can hold my attention in the long term, but I see no reason to miss episode 2.