We’re into the second half of the spring season and not a lot has changed. Our favorite shows continue to tread water to the point where even the already snail paced Tsukigakirei throws in a completely unwarranted recap episode. We’ll keep holding on to hope that things will pick up eventually though, and remember, it could always be worse…

Jel: ​​​​These past two episodes basically go hand in hand so I had the same issues this week as I did last. I don’t think the movie shoot fits the setting at all and the entire thing feels kind of aimless. We’ve been casually bouncing back and forth between Maki and Shiori’s problems with very little set up or transitioning. That all said, the ending was very sweet and delivered a nice emotional gut punch. Yoshino’s handling of the house situation was her best example of problem solving yet and proof that she’s a worthy queen. While not on par with the Flip Flappers version of the “nice old lady taking care of a lonely child” story, it was enough to warm my cold, dead heart. I suspect we’ll be dealing with Ririko’s issues next, so let’s get that out of the way and get this super team of cool ladies back to work. 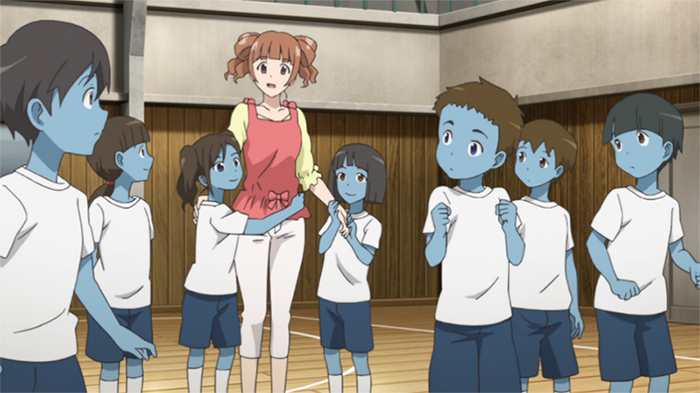 Jel: This was a recap episode so nothing to say other than there must have been production issues or something, this show certainly hasn’t done enough to deserve one. Not a great sign, but hopefully things will be back on track for the rest of the season.

Artemis: This kind of episode is exactly why I think Virgin Soul would’ve worked far better as a one-cour show. What we should have got was a great action-packed episode – a reward for slogging through all the dialogue-driven build-up of the previous several episodes. What we actually got was a whole lot of nothing, likely for the sole purpose of using up time. I’m not exaggerating; by the halfway point, absolutely nothing of relevance had happened either in terms of talk or action. There were plenty of of wide camera pans over rooftops though, and I was also allowed the thrill of watching Azazel’s cloak flutter ominously in the wind a lot. Not exactly the payoff I’d been hoping for. Pacing wasn’t even the issue in this episode so much as just plain bad writing, and I’m worried the trend will continue. C’mon Bahamut, you’re supposed to be better than this.

Iro: Ah, things are finally happening! Except not that much. I hate to keep bringing up Genesis, but by this point in Season 1 we had horseback rooftop swordfights, battled giant goat monsters, defeated an evil necromancer book, rammed a zombie pirate ship into a giant enemy crab, mounted a rescue mission into the heart of demon territory, and defended the capital city from a retaliatory invasion. What’s going on in Virgin Soul? Nina turned into a dragon twice, and Rita cooked some chicken wings. Step it up, Bahamut. You’re better than this. (Power Gates are pretty rad, though.)

Jel: ​One of the many things that makes this show feel outdated is the way they’ve handled Motoko. Despite being a robotics engineer herself, her character has been solely defined by her crush on Ochanomizu. Basically, she’s eye candy, and in the year of our lord 2017 that just feels wrong. So in that context I guess it was good to give her something to do this week, even if it was just more relationship business and not pitching in with the robot building. It did give us the series’ one good joke: the mysterious A105. I hope we never learn what it is. That’s about all the positive things I can say as this was still a dull episode where nothing really happens, but that is what we’ve come to expect at this point so no sense in rehashing it every week. Maybe next week will be better? We got a glimmer of hope with the “robot wrestling” envelope in the end but I’m not holding my breath.

Marlin: TI’m continuously surprised at the ways the magical is treated as the mundane in this world. The Friday Club last episode basically killed Professor Yodogawa’s tenure and seemed to be his enemy, yet this episode they are all having a bath together like it was no problem. Benten’s not-so-subtle flirting with Yasaburo returns this week. I still am not sure where they mean to take this relationship, as Benten always seems too dangerous for Yasaburo to ever actually get involved with her. It’s this strange combination of tense situations with unfitting responses that I don’t quite get. This week, we have two characters threatened with death, and one character where that threat is carried through. After his trip to hell last week, I knew Yasaburo was going to face off with Soun, but I did not expect things to escalate this quickly. With such a despicable man, I’m glad the show still decided to show this scene for what it was: someone watching the death of a family member, no matter how estranged. With Benten’s play near the end of the episode, Yasaburo seems to be in a dangerous position. The Friday Club is very powerful, and he still hasn’t solved the problem of them eating his own kind.

Gee: Huh, isn’t that odd? Another episode with a large focus on Diana also happens to be one of the weaker episodes? Who would’ve thought? It’s almost as if Yoshinari can’t help but give his pet character way more spotlight than she deserves. As much as I have enjoyed my time with LWA, the number of episodes focusing on Diana has hurt the show’s legacy in the long run. Compare the episodes with Sucy, Amanda, or Constanze to the ones with Diana, and it’s pretty apparent that LWA is undeniably filled with lots of interesting and charming side characters that they refuse to use in favor of Diana. The one saving grace is that if Akko and Diana’s mutual understanding is permanent character development, then hopefully LWA will use the few episodes it has left to bring back the splendor and charm that defined the show to begin with.

Jel: For your consideration: compare the header image of this post to episode 9 of Sound! Euphonium 2. Coincidence? Also the best joke of the episode is Akko’s built up immunity to snake venom after all of Sucy’s casual poisonings.