For our fifth anniversary Zigg returns to the very first show he wrote about on the blog, and goes one more round with Eureka Seven AO.

This entire ‘episode’ is one of the oddest things I’m come across in all the years I’ve been an anime fan. As I covered back in the early days of the blog, Eureka Seven AO was something of a disaster, an ill-conceived follow up to the much loved original which almost entirely lacked its charm, spark, or great character writing. The show has been largely persona non grata among the fandom since, and even BONES has mostly ignored it, what with the announcement that their next E7 project will be a movie remake of the original series instead.

So why does this new bonus OVA exist? As with a lot of things in Japan, the answer can be traced back to pachinko. Basically, Sammy Corporation, pachinko and games giant, decided to make a pachislot machine based on the anime, and so commissioned this new epilogue as part of the promotional push. It was streamed in five separate segments on their Youtube from January to March this year, and that’s where I watched it. There’s no indication of who worked on the episode, but it sure looks a lot like a BONES production, and the original voice cast is all present and correct, so I think it’s fair to say Sammy went the extra mile and got the original studio back on the job. 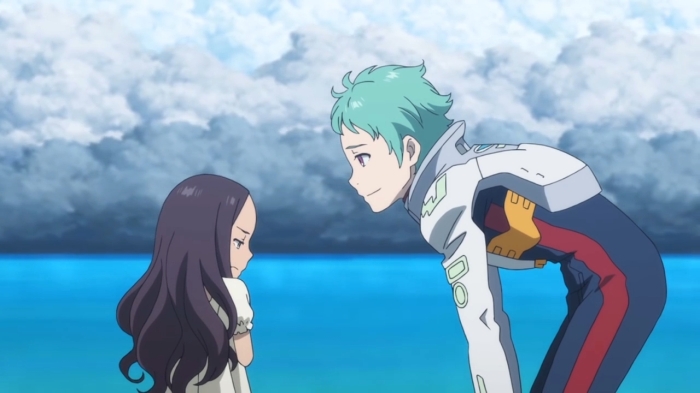 Unlike a lot of bonus episodes (including AO‘s own OVA) this thing is billed as a fully fledged part of the series, and indeed it does slot neatly into continuity, barring one or two minor details. Essentially it’s an epilogue which covers what exactly happens to Ao in the final two minutes of the final episode, in which he disappeared into a rift in space caused by the show’s all powerful plot hole creator, the Quartz Gun, and returned two years later after an unspecified series of adventures. It turns out that Ao became unstuck in time, and wandered through various periods much like his mother Eureka did in the series proper. Thus, this episode consists of a series of vignettes flashing backwards and forwards between the past and present of the AO storyline.

The big problem is though that the main story of AO ended with reality being completely rewritten and basically all of the events of the show being negated. Yes, it was about as satisfying as it sounds, and it creates big problems for this OVA attempting to be meaningful in any way. While we get flashbacks into the past of various characters, they’re *not* the characters we know, or the history we know they had, and that really makes it very underwhelming to see them again. There’s some temporary delight to be found in the new situations that familiar faces have been placed in, such as teenage CEO Fleur decked out in a business suit, but that’s fleeting and there’s no real sense of attachment, something which AO already struggled with when it actually had continuity to fall back on.

The other flaw of this OVA is also a familiar one from the TV series – complexity addiction. Unwilling to let Ao’s journey end naturally, the episode has to shoehorn in some vague plot about how all the people whose lives he touched in his ghostly journeys have come together to rescue him. That’s not a terribly bad idea, but it’s one that needs more than twenty or so minutes to be developed. The result is it feels awfully rushed and superficial, tacked on to give some sort of cathartic reunion at the end. This is despite the fact that the whole point of the sacrifice was that Ao was returning to a world where he no longer existed. In one of the more egregious cuts we hear about how Ao supposedly saved this incarnation of Fleur’s life when she was a baby, but aside from a single cutaway shot there’s no indication of how or why this happened. Why not take the time to show this instead of, say, the pointless sequence with Maggie and Maeve?

So is there any redeeming value in this add-on? Well, yes actually. The episode struggles mightily for tone, with way too many comic interludes, but when it focuses on Ao’s loneliness and impotency, there’s definitely something to be found there. A sort of bitter sadness permeates the best scenes in the episode, such as Ao nicking himself shaving while the stars rush by outside, or his conversation with the younger version of Naru on the beach. I spoke in my writeup of the original finale how I’d always had a soft spot for the ‘Flying Dutchman’ plot, where characters are doomed to wander the world forever, and at moments this episode gets close to capturing the melancholy of such a tale. There’s also a surprisingly large amount of decent art in this episode, most notably in the brief aerial sequence between the three LFOs. It’s nice to see no-one involved skimped on the production even though this was just a promotional tie-in. 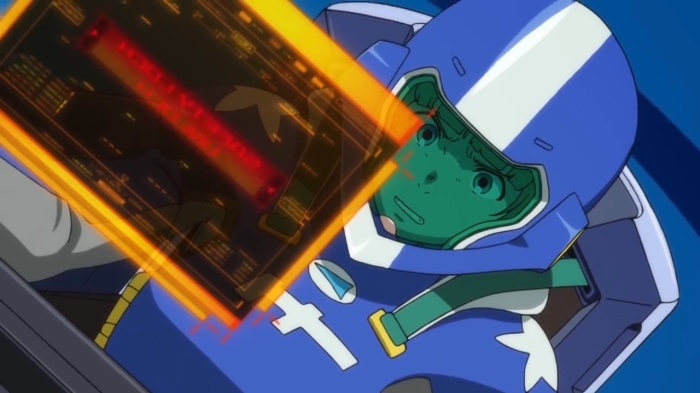 Ultimately then, this OVA is dispensable, but it’s a lot better than the sort of garbage tie-in one might expect from such a commercially-driven venture, and it was certainly surprising to me how much I got out of it. Part of that was of course nostalgia for the suffering the original show put me through, but I do actually think this thing adds some decent narrative gristle to AO‘s original ending, at the cost perhaps of taking away some of its melancholy open-endedness. Perhaps my rage against the franchise has just subsided over the years. Regardless, this was a fascinating trip back in time and I’d recommend anyone who made it to the end of the show. Call it a return to the bad old days.