For the first half of this episode, I was almost convinced that this show was going to slide into mediocre terribleness. You’ve seen it before, a show with a hackneyed cast and three one-note jokes it loves to harp on every episode as if its audience has the memory and attention span of a kindergartner. A show that isn’t so much hateable as lamentable for wasting your time. The only really offensive idea of this episode is the laughable idea that Itsuki somehow has a glut of female fans. I can make fun of the degenerate otaku’s female counterpart for a lot of thing, but nothing so far has suggested to me that they are anywhere near as into the same inhuman fascination with incest.

Thankfully, the second half of this episode landed and gave us that black hole of degeneracy we have come to expect of this show. Not only did we get a completely self-indulgent info-dump on why writers have basically zero responsibilities, but a disgustingly self-indulgent trek through Itsuki’s fantasies. I honestly was confused at first, it felt like the author was just bragging about how writers don’t have any overhead costs and are able to bend their responsibilities to deadlines. I didn’t think he’d actually go that into depth on how taxes work, but honestly it’s probably a justified move considering how many unemployed otaku there are out there. I feel so bad for Japanese voice actresses, episodes like this being the main reason why. I can’t imagine what goes through your head when you have to say out loud “A little sister is in love with her big brother and masturbates every day wearing her brother’s underwear” I know voice actresses can become the highest paid professionals in the industry, but no amount of money is worth that kind of self-degradation. I can’t tell if we’re actually supposed to hate Itsuki more because of this segment or if it was written solely for that degenerate among degenerates, the masochist. Either way it comes off as disgustingly creepy, as if a woman would ever actually enjoy the idea of looking through a man’s porn collection just to shame him. Now four episodes in, it’s honestly frightening how much of a contender this show is for the most horrible of the two #HATEWATCH titles. I vividly remember how adamant we were that Eromanga couldn’t be topped, so to see something come out so soon challenging that notion is incredibly disheartening as a long time anime fan.

Carcassonne is a good game and I will not have this degenerate disgrace it by association.

John Locke states the fairly obvious fact that the government does require an income in order to function properly. What this income should be will be debated until the end of time, but only the most foolish of libertarian ideals would say the government should excise no taxes from its people. Thus, tax fraud of any kind is objectively immoral because it steals from the government’s ability to properly function. In using any of his trash purchases as tax writoffs, Itsuki is basically now a criminal, though honestly tax evasion is the proverbial jaywalking of his crimes in comparison with the theft and murder of incest and pedophilia. 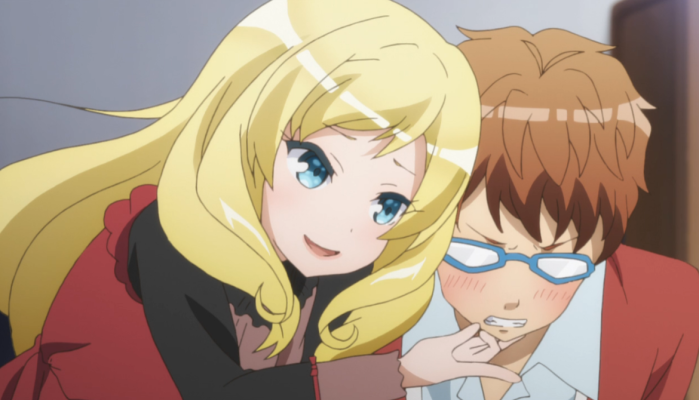 If there was any hope that we’d see at least a tiny spark of intelligent satire out of this show, it is now officially dead. Our new accountant character in nothing but pure wish fulfillment just like the rest of the female cast. Using the old “she looks like a kid but she’s actually over 30!” gag makes her even lazier than the other two. I don’t know if that was intended to be so on the nose that it’s a joke but even if it was, it didn’t work.

About the only self aware moment was reviewing Itsuki’s porn game collection, pointing out how stupidly literal the titles of those games can be. This again should have been satire, but the fact that it’s written off as just another of Itsuki’s personality quirks makes the author complicit. We’re supposed to see Itsuki as having a lot of bad traits but then think it’s OK because he’s still a “good person”, or so we’re being told. Instead he just comes off insufferable and I hate every moment I have to watch him on screen. It’s getting so bad that I’m starting to doubt if I have the strength to see this season of #HATEWATCH all the way through. We’ll see how it goes next week.