I’m very encouraged by the quality and variety of anime we’ve experienced over the past few years. Sure there’s still a fair amount of trash out there, but I think the shifting demographics and possibly aging fan base has resulted in better anime overall. That’s a different topic for another time though, so let’s get to it: it’s the end of the year and that means lists!

As is our custom, the GLORIO crew will be posting a variety of retrospectives on anime, music, drama, and whatever else we want to talk about that happened in 2017. As is also our custom, I’ll be kicking things off with my favorite anime moments of the year. Enjoy, and next time we meet we will crown our top 10 best anime of the year. 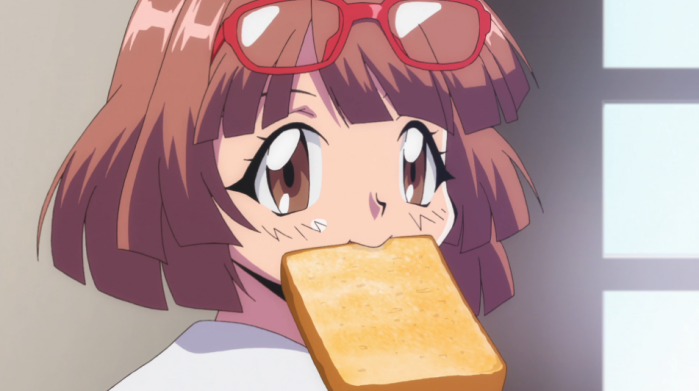 This one’s not even a week old but it deserves a mention. There are hints throughout the series that not all is what it seems in the world of Anime-gataris. Most of them can be chalked up to visual gags for comedic effect, but as Minoa begins to actually interact with these anomalies it opens up all kinds of questions. By episode 11, we are very near the truth. Minoa is haunted by her visions of real life anime, in a way that is weird and funny but also kind of terrifying. The changes in her family are particularly unsettling, and she begins to question her own sanity along with the audience. It’s an incredibly enteraining turn of events, especially when you consider Anime-gataris starts out as a straightforward, light hearted club comedy. As of writing we’re still waiting for the final episode, and the fact that anything is possible now has me really excited for it. 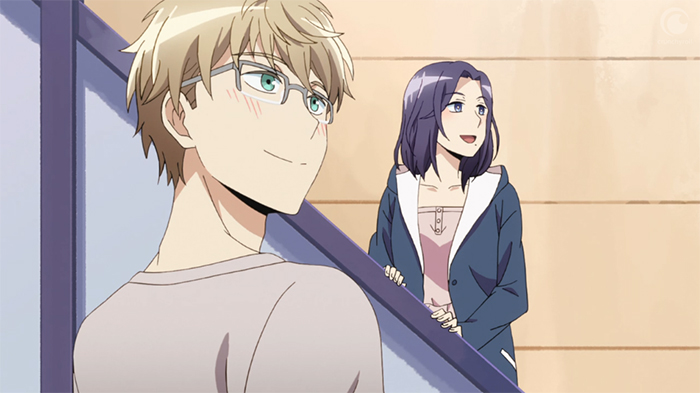 Recovery of an MMO Junkie Episode 10

MMO Junkie is good throughout, but there would have been riots in the streets if it didn’t end with some kind of closure. Fortunately the final episode delivered, with Sakurai fighting through his anxiety and doing what he needed to do. The best part though is how he really has to stumble through it, which is much more endearing than some grand speech and, frankly, more realistic. You can sympathize with how hard that moment was and it makes it feel all the more triumphant when Moriko returns his feelings. Yeah, this show is really adorable and you should watch it.

There’s a hard reality to Maki’s character arc in Sakura Quest. We’re told growing up that we can be whatever we want if we work hard enough and I believe that is true to a certain extent, but things also rarely play out the way you expect them to. Learning that lesson can be devastating without the right perspective. Fortunately for Maki, she’s got her pops to set her straight. His matter of fact statement that you can in fact continue to enjoy the things you like even if they don’t pay the bills is so simple, and yet it is spot on. It’s those kinds of too real life lessons that makes Sakura Quest worth watching.

I can’t think of another anime where the main character is best friends with his friend’s girlfriend to the point where they actually hang out together on screen and talk about their problems, all with zero sexual tension. I mean, even just having a guy and girl be friends with no romance is rare. Sure, there are some misunderstandings caused by Keita and Aguri’s trips to the local family restaurant, but their relationship is solidly platonic. The ending of episode 10 is the punctuation mark on all this, as Keita seems to subconsciously value their friendship more than the hot new game he was trying to buy or even hanging out with his actual girlfriend. It’s unintentionally sweet and one of the most refreshing relationships we’ve seen all year.

The completely unexpected sequel to 2015’s top moment does not secure that honor for Mr. Osomatsu for a third year in a row, but it is still great. I think it was a smart choice to go in a completely different direction with Jysuhimatsu’s sort-of-girlfriend, taking a much lighter, irreverent tone that’s more in line with the rest of the series. Somehow it still manages to be sweet and uplifting in its own way though, capped by a ridiculous song that was probably the only way to end it. Oh, and when I first saw the Girlymatsus appear in the regular Matsu world I screamed “EVERYTHING I KNOW IS A LIE” and questioned my own existence, so that was fun too.

I think the brilliance of this particular moment isn’t just its sheer absurdity, but that you realize it’s going to happen exactly one second before it does. And that one second is glorious. I mean, who would have guessed the sad sack genetic recreation of famed composer Franz Schubert would transform into a rap god and proceed to destroy the rest of the cast with rhymes so hot they turn into Parappa the Rapper characters? Just look at that sentence! It makes me sad that the director change torpedoed season 2 to the point where it’s almost unwatchable, I’d love to get more moments like this.

5. Taking Out the Trash 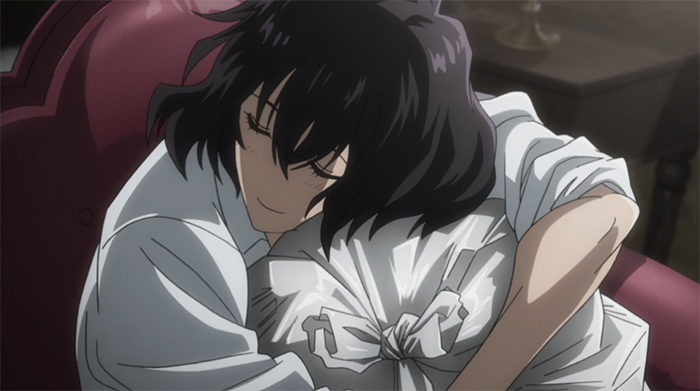 Despite the dangerous, violent setting and so much blood it’s part of the title, Blood Blockade Battlefront is actually pretty pleasant. Look past their rough edges and the cast are all pretty decent people that care about each other. That said, things never get too sentimental and the Chain focused episode 4 is the perfect example. Simply using Chain’s crush on Stephen as her tie to the real world would have hurt that balance. I could see her being OK taking her feelings to the grave. But the embarrassment of having him find out she’s a slob? That’s just unacceptable. Making her pride more meaningful than her silly little crush fits her character so much better, and really shows how great the writing on BBB&B can be.

Akko’s Sleeping-Beauty-In-Wonderland adventure through Sucy’s emotions is mostly full of spot on sight gags and well written jokes, but at the heart of it all is one surprisingly sentimental moment. Framed in an homage to old black and white cartoons, Akko’s trip to the drive-in lets her know that deep down past all the apathy and attempts to poison her, Sucy really does care. It’s truly heartbreaking that this and many of the best moments from Little Witch Academia (including the amazing Enchanted Parade) will be the final legacy of writer Michiru Shimada, who recently passed away. She will be missed.

3. Hina Did Nothing Wrong

As season 2 of March Come In Like a Lion began, my ethusiasm for the show was at an all time low. The final third of season 1 was bogged down by shogi matches and side stories that were taking away from the series’ core strength: Rei’s relationship with the Kawamoto sisters. The first few episodes of season 2 had me convinced this was the new direction March was headed and both Marlin and I were actually considering dropping it. Then episode 26 happened. This episode kicks off a powerful and heartbreaking arc about Hina and her experience with bullying in school, which manages to show the strength of her character and treat the topic with the sensitivity it deserves. The defining moment is when Hina, overwhelmed and choking back tears, forcefully declares she has no regrets because she did nothing wrong. This lights a fire in Rei that we’ve never seen before, and since then the show has returned to its winning combination of heavy drama and gentle healing that we grew to love last season. 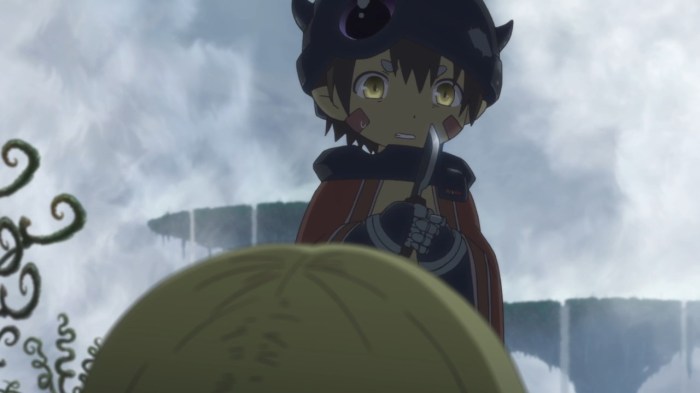 Made In Abyss Episode 10

I don’t think any single moment shook the anime community more than Made In Abyss episode 10. Riko and Reg had plenty of brushes with death up to this point, but did anyone think they were really in danger? As the plucky main characters destined to reach the bottom of the Abyss, surely their plot armor would protect them, right? Not quite. The Abyss makes good on its threats this episode, and it’s not even so much Riko getting injured that’s shocking – it’s the extremely graphic nature in which it all goes down. Contrasted with the cute character designs and lovely background art, it makes the blood and fluids and swelling and breaking bones even harder to stomach. I actually had this moment spoiled beforehand and it was still extremely uncomfortable to watch. The gut-wrenching final episode might be more emotionally powerful, but episode 10 is where Made In Abyss firmly established the kind of series it was going to be.

I have no problem saying Rakugo is the best anime I’ve watched in the history of the GLORIO blog, and it’s definitely on my personal all time favorite list. It was really difficult choosing one moment to highlight. Ultimately Yakumo’s last performance in episode 11 wins. Yakumo spent his long career specializing in bawdy, adult rakugo and has historically struggled with comedy. But as he gets on stage and sees a young Konatsu and Shin, he chooses the silly, kid-friendly “Jugemu” for his final story. Decades of pain, self-inflicted or otherwise, have melted away and Yakumo is finally at peace. I had tears streaming down my face the first time I watched this episode and I’m getting choked up trying to write about it months later. If there’s one thing you take away from this entire post or anything I’ve written this year, let it be my strongest recommendation I can give to watch this series.