​Nadeshiko just moved to a new town and gets lost trying to see Mount Fuji. She stops at a campground and meets Rin, an avid camper who she will inevitably start a camping club with. 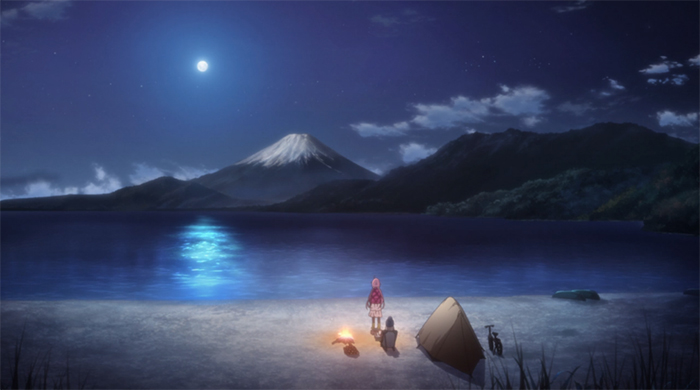 That’s all fine as I’m sure there are camping nuts that would enjoy that, and Rin is so cool and competent that the first half of the episode is a relaxing, if slightly dull, watch. It’s the second half that drove me crazy, basically the second Rin finds Nadeshiko awake and she dominates everything from there. Nadeshiko is the dumbest character I’ve seen since that one girl that was so dumb she forgot how to ride a bicycle. Seriously, anyone that stupid would be dead before reaching high school age. I found her extremely obnoxious and I think it totally took away from the chill vibe they were originally going for.

Ultimately you can tell Laid Back Camp is made by people passionate about the topic and it almost delivers, particularly in the one almost poignant moment when the girls get to witness Mount Fuji under a clear night sky. Sadly I fear their efforts are going to be torpedoed by having to meet their energetic anime girl quota and the inevitable shift to a school club premise. It’s further crushed by existing in the same season as the lovely A Place Further Than the Universe, which tackles a similar subject in a far superior way. Go watch that instead.

One thought on “First Look: Laid Back Camp”