Kashiwagi Sora lives at home by himself, though his dad regularly sends him gifts from abroad. The latest in a series of strange and supernatural deliveries is a mummy from Egypt. It’s kinda cute.

How To Keep a Mummy is the hardest kind of anime to write about. The only significant thing that happened in this episode was the arrival of Mii, the adorable palm-sized mummy that this show is all about. We do also meet one of the protagonist’s friends, a typical ‘that’s so cute I must bully it’ kind of character, but there’s just nothing more to say about him or their meeting.

As little as there is to say about it, the show wasn’t bad. It’s sickeningly cute, with Mii’s continuous failed attempts at doing anything being equivalent to watching newborn puppies falling over as they attempt to walk for the first time. 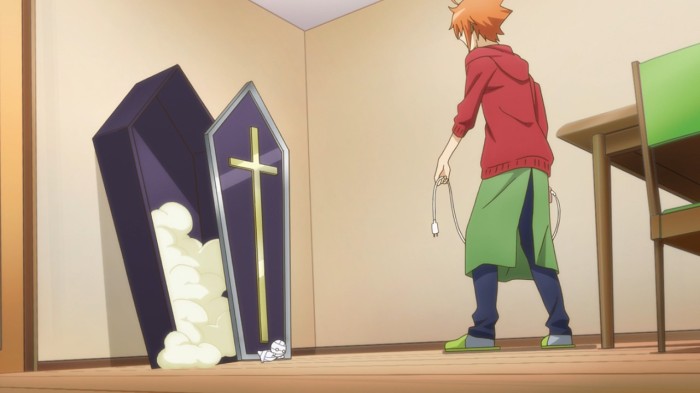 One criticism I do have is that at the start of the episode, after the coffin containing Mii shows up, there’s a joke about the protagonist expecting there to be a full-size mummy inside. It’s ruined because the opening plays right before this scene, meaning we see Mii (and a few other characters that are probably going to be shipped to protag) before the coffin is opened. Placing the opening after this scene would have made the joke work.

Is this a show worth watching? That really depends on whether you are already sick to death of all the cutesy shows this season. I am worried that the show isn’t going to have enough substance to it, though there’s some hope with more characters and monsters to introduce. At the very least, I expect it to do pretty well in the Glorio’s Cute Anime Battle Royale if later episodes are like this one.

colons’ verdict: A small flaw, but it hits hard (for me at least)

I loved this episode. Yes, it was substance-less fluff, and yes, I have my concerns about this show’s ability to ride on that for a whole series, but hey, I have my weaknesses. There’s one pretty big problem I have, though. Euri mentioned the opening briefly above, and has written about this at length on this very blog, but I feel strongly that they really fucked up on that one. The opening reveals a lot about the universe of this show that is barely even hinted at in the actual content of this episode. Unless the whole thing is a bait-and-switch, it completely counters what the rest of the episode implies this series is going to be.

So I’m worried. Are they going to spend the next three episodes working from a script that dramatically reveals information that seems to have been written outside the knowledge that the opening already revealed it? Are they going to give the countless other characters shown in the opening the time to really give us a reason to care about them? Even if they do a genuinely good job, will it work, given what they already went out of their way to tell us in their fun little music videos?

It doesn’t help that I don’t think the other monsters are really that cute, and that I feel like I, personally, would have really enjoyed this show if it was just this one little friend getting up to hijinks. Unfortunately, I already know that’s not the case.

4 thoughts on “First Look: How to Keep a Mummy”