I’ll be real with you guys, I didn’t make it past the first half of this episode and only have a rough idea of where it went after that because I started randomly skipping until the conclusion. That’s how bored I was. On the one hand, I have trouble completely condemning a show if I didn’t even finish the premiere. On the other hand, I was just so struck by the generic-ness of literally everything about Devils Line, from the story to the visuals, that I didn’t even have the patience to sit still for another ten minutes. I think that probably says something of significance in and of itself.

Anyhow, assuming you’re still not over the whole vampire romance craze (didn’t that end three or four years back?), just know that Devils Line adds absolutely nothing new to the genre (think a combination of a poor man’s Tokyo Ghoul and Twilight), and that the animation is pretty terrible to boot. Seriously, that’s all I got. The only other note I have of any kind of importance (?) is that MC-chan’s best friend is drawn with psycho eyes. I’m not kidding – she looks like a deranged killer who’s going to snap at any second and murder everyone with a spoon or something. Please watch at least the first five minutes of the show and back me up here. 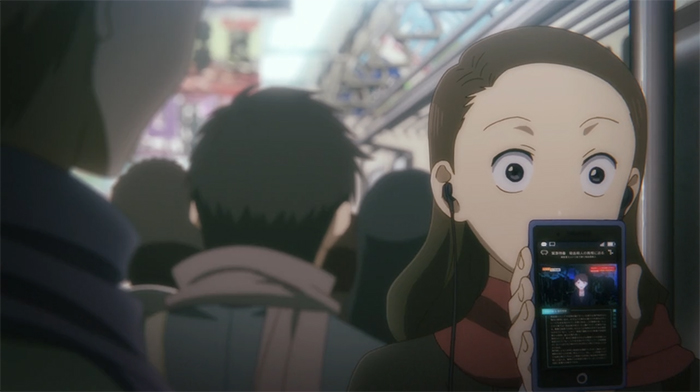 (she’s not making a face, that’s what her eyes look like ALL THE TIME)

Jel’s verdict: DO NOT WATCH THIS

I was gong to write my entire post post as a funny bit about the friend character’s psycho killer eyes, but then I actually watched the second half and HOO BOY there is a lot to unpack there. Basically take all the bad things Artemis pointed out and add 110% more rape and other red flags. Normally I don’t fully recap things in these first look posts because I don’t want to spoil anything, but I don’t want anybody to watch this so here we go: it’s revealed the guy friend of the main character who is always following her around actually asked her out a few days ago and she turned him down. So it’s already pretty creepy that he still basically stalks her, and then it gets worse.

So our actual “hero” character tracks the couple down and reveals that the dude is in fact a vampire, and that he’s the one that killed and raped the three women we saw earlier in the episode. Pretty bad, right? IT GETS WORSE. After his confession, vampire dude is subdued by the “hero” after which a loving montage of memories plays and shows that he really did care about this girl and they really were good friends. You see, to a vampire human blood is like a powerful narcotic/aphrodisiac. He HAD to kill those women to keep his lust in check and keep the girl that he really loves pure and innocent. Yes, they actually try to make us feel sympathetic toward a guy that just admitted to murdering and raping three women so he could keep stalking a girl that turned him down. I… just….. AAAAAAHHHHHHHHHHHHHHHH…. and then IT GETS WORSE.

The final scene has our cool, brooding “hero” helping the main girl back to her apartment, in which he realizes she has a cut on her mouth. As it turns out, OF COURSE he’s also a vampire and overcome with lust, pins her to the ground, and starts shoving his tongue down her mouth. End scene, end episode. I don’t care about whatever excuses they’re going to probably throw out to justify this next week, that alone is too far. On top of all that there’s also probably something to be said about using blood as a metaphor for drugs and justifying a police state, but its not worth the energy. Please don’t watch this show, they don’t deserve your support.