Alternative title(s): Last Period: Owarinaki Rasen no Monogatari
Another of those Gacha Game Adaptations, by J.C.Staff
Streaming on Crunchyroll

In the latest gacha game-inspired adventure, we visit a world where magic-users known as Periods kill monsters known as Spirals. Wacky hijinks ensue.

First and foremost, credit to the show for not trying to tell some fantasy epic here. We’ve seen many attempts at that, a lot of which were also mobile gacha games like this is, to little success. Instead, Last Period decides to use its quirky characters to make this a comedy. Not a particularly amazing one, but it certainly has its moments and I’d sure as hell take that over something far more serious.

The episode starts off bizarrely, throwing the four main characters and their mascot pet/friend at us as if we were already familiar with them. This isn’t the start of their story, this it makes very clear, but it is a fresh start for them as we see their homes and possessions sold off for some debt that’s briefly mentioned. The show seems to be okay not making proper introductions, and while that’s interesting on paper, I can’t tell you the name of any character that appeared in this episode.

The show mostly relies on slapstick humour, none of which is really that good, but I did quite enjoy Wiseman – a team of goofy villains that have their own intro sequence and special effects. We also meet their boss, who is very obviously the main cast’s employer in a mask, so it’s pretty apparent that Last Period is trying to invoke the feeling of a kids show.

One part I did enjoy comes towards the end, where the crew find themselves up against a 5-star rarity summon. We then have what can best be described as a gacha truck showing up, allowing them to summon something in response. We then get to see them roll for a character, complete with an extravagant summoning animation, and a reveal that their summon was a 1-star rarity. They then get trashed by the 5-star. 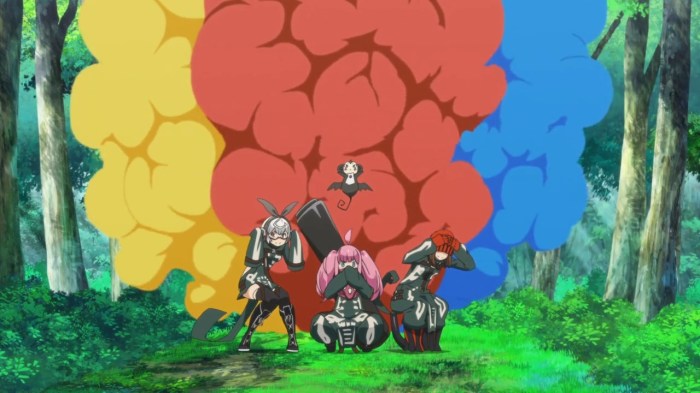 It’s a fun goof, but a completely bizarre one to make when this show is an advert for a real-life gacha game. I’m not sure how the experience lines up with the actual Last Period game, but I wonder if that self-mockery is something that fans might have expected.

At any rate, this is an easy show to drop, but thumbs up for not being absolute trash.

I really enjoyed this episode. I feel like going the self-aware, parody route is probably the best way to tackle an anime adaptation of a dumb gacha game that probably has no story. Aside from the fourth wall breaking, the actual comedy is just well made. The jokes are good and the comedic timing is spot on. We even have some potential break out stars with the off-brand Team Skull nemesis group WISEMAN. That all said, I don’t really see how they can keep this entertaining for an entire series. There’s only so many jokes you can make about rolling a garbage 1 star character. I might check out episode 2 but I’m not expecting much going forward.

Iro’s verdict: The First One is Free

That’s how these gacha games hook you, right? You get an early 4 or 5 star, and that makes you at least subconsciously think that it’ll happen next time. This episode gave me a couple legitimate laughs and had some cute fourth-wall-breaking gacha gags, but I’m also completely fine with never watching another episode; there just doesn’t seem like there’s enough substance here (comedic or otherwise) to carry more than maybe 30, 40 minutes of footage. Still, credit is due for this not being a total trash fire. Fun fact, too: the mage girl is voiced by Deka Pink from Dekaranger!