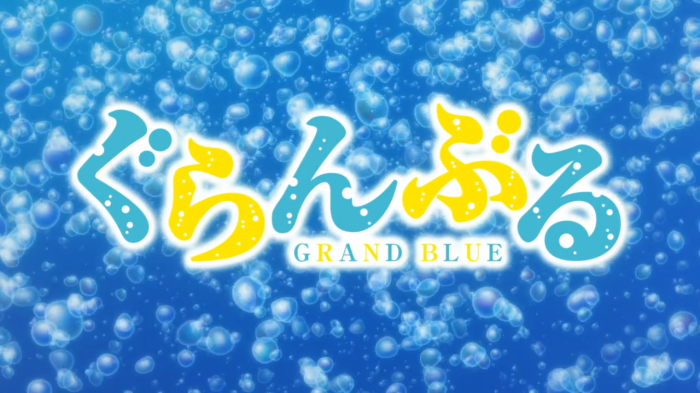 Moving in with his uncle, who owns a diving shop, Iori Kitahara anticipates a fulfilling freshman year in college, surrounded by cute co-eds and kindred spirits. Unfortunately, the local diving club doesn’t exactly seem to have its priorities straight.

I can’t believe they turned my favourite Lonely Island song into an anime.

While I was never in a frat, Grand Blue’s fratboy comedy vibe brings back memories of my own freshman and sophomore years of college, when you drank excessively because it was the exciting new thing, everyone was doing it, everyone said not to do it, and because it was fun to have an easy excuse to be a dumb rowdy asshole. If nothing else, Grand Blue brings a tone and approach to the already uncommon college-set anime that I haven’t seen anywhere else. Most anime set in college tend to be the kind of plodding melancholy affairs about the isolation of modern life and the uncertainties of young adulthood. Thankfully Grand Blue is here to remind us that actually college was also a period for many of us to be more outlandish than we’re allowed to be ever since.

While not every joke is a killer, the anime’s true quality is its excellent comedic timing, effectively delivering its gags without letting them overstay their welcome. In an almost Trigger-like fashion, Grand Blue knows just how many times you can repeat a joke until it gets ironically funny without overstepping its bounds. We’ll have to wait and see if it can keep the quality of comedy consistent from here on out but for now, Grand Blue is the premier people-being-horrible-to-each-other anime comedy of the season. 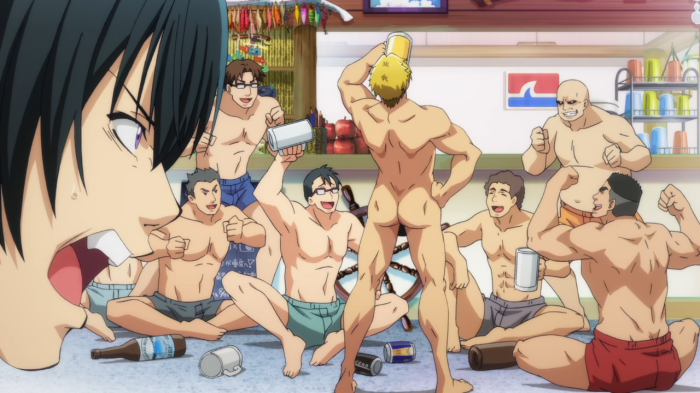 I’m not from America or a guy, and have therefore never been part of a frat. That’s exactly the sort of stereotypical image and feel I get from Grand Blue though – a Japanese version of young, college-age guys getting constantly hammered by the beach and generally behaving the way you’d imagine. I don’t know that I’d call it particularly offensive (while certainly not G-rated, the proceedings are still fairly tame and unimaginative), but it’s nothing but the same one or two jokes over and over as exaggeratedly jacked guys down lots of booze, get naked, and bond over their manly manliness. Meanwhile, the ladies of the show are introduced in one of two ways: from the legs up or the breasts down. They are all pinnacles of beachy, girl-next-door type sexiness (or at least, what the creators think are the pinnacles of beachy, girl-next-door type sexiness), and there’s also scuba diving involved because… it sounded vaguely more interesting that way I guess? In any case, Grand Blue is first and foremost a slightly raunchy comedy, and to me was also as repetitive and banal as it looked as first glance. I honestly stopped paying close attention by the end of the first half of the episode, as I really think it was just pretty boring all-round.