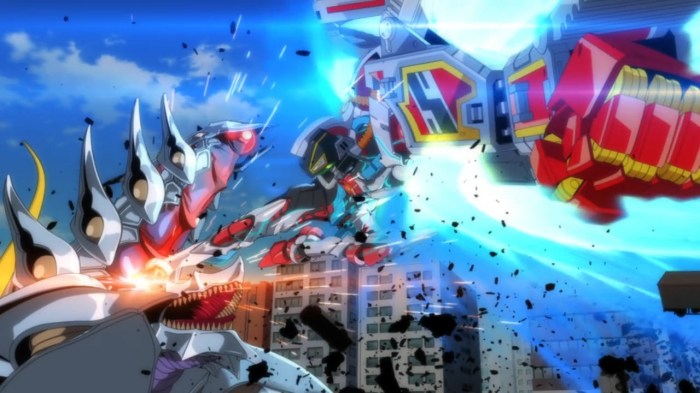 Akane & Rikka go on a group date with some college boys, causing Yuta to get extremely creepy. Turns out Akane doesn’t like them that much, so she moves to the obvious next step – murder.

I don’t think this episode is as good as last week’s masterful installment, but it continues to demonstrate one of Gridman‘s greatest strengths – blending humour, action, mood, and character work into a single cohesive narrative. There’s a little something for everyone in each episode, and that makes it an extraordinarily fun and easy show to watch.

As far as the character work goes, this episode is centered around two major threads, namely Rikka’s hesitant attempts to reconnect with Akane, and Yuta’s….concern about her hanging out with a bunch of college boys. Let’s deal with the former first. There’s some really great scenes setting up the idea – that awkward bus ride at the beginning is cringeworthy in exactly the right way – but it sort of fizzles out after that, as the show switches focus to Rikka and Yuta. There are definitely some good little bits though, like Akane’s completely flat refusal to accept Rikka’s answer on Yuta, and her general inability to read the mood. It’s another strong episode for Akane in general actually, between the opening, her not-quite-right fascination with Rikka and Yuta’s relationship status, and her subsequent vastly disproportionate retribution on the Youtube group. The writing continues to be good at painting her as malevolent, petty and gleeful, but not quite up to the point where she’s straight up evil. ‘Psycho womanchild’ is not a trope that anime is unfamiliar with, but it’s done with greater subtlety here than most examples, and the result is that Akanne, while still undeniably an antagonist, feels a little more three-dimensional than most examples.

It’s also a solid character builder for Rikka, and what’s impressive is that it plays neatly into the subplot of her relationship with Yuta even though the two don’t directly interact a great deal. It’s super obvious to the audience that Rikka actually has no interest in going on a date with a bunch of shitty Youtubers, but she’s doing it as an excuse to hang out with Akane and maybe get that relationship going again. Yuta though, doesn’t know that, and thus immediately leaps to the worst and most stereotypical conclusion. Thing is though, it not done out of malice, at least not deliberately. He’s obviously concerned for her wellbeing, while at the same time being jealous of the idea that a possible relationship with Rikka is being snatched away in front of his eyes. That’s a shitty attitude, but it’s shitty in the way a teenage boy with a crush probably would be, and it’s important that Max immediately calls him out for being uncertain about his own feelings. Yuta’s awkwardness and self-doubt is also a great contrast to how straightforward and level-headed Rikka is in this episode, best exemplified by her simple yet effective solution of unplugging the computer and plugging it back in. I’m encouraged that Yuta’s attraction to her is being acknowledged and acted on this early, as opposed to many anime romances which seem to pop fully formed out of nowhere, and if Yuta seems a bit skeezy this episode, it’s a necessary humanising touch to him that doesn’t compromise his essential goodness.

Elsewhere, the action remains top-notch, with the three-way dance between Gridman, Anti and the Monster-of-the-Week a great melee. The attempt by the NG Junior High students to all use their powers at once is a good example of how Gridman justifies a trope by turning it into a fun visual gag, rather than just falling back on saying ‘that’s the way it is’. We beat the ‘show don’t tell’ drum a lot here, and this is a fine example of doing just that. It’s kind of odd they’d use Max and his Battle Tracto for a second week in a row, rather than busting out a sweet new powerup, but this does at least give us the wonderful visual gag of Gridman powering up with giant arms then defeating his opponent by Rider Kick instead. Even in a ‘lesser’ episode Gridman finds time to deliver top-notch action and surprisingly substantial character development, and I continue to be impressed by how it’s going about its business.

Episode 4 brings us the inevitable cooldown after Gridman’s excellent introduction. Like many anime, after we’ve been introduced to its primary narrative elements and characters, we’re settling into the comfortable if still highly enjoyable formula this story will likely take for a few episodes before ramping up again. If nothing particularly stands out this week, it’s because episode 4 is a generally solid balance of all of Gridman’s best traits.

That said, the forefront of this week are definitely the moments we get with Akane that give further insight into the character. Her conversation with Rikka at the start is a fantastic piece of writing and voice directing. There’s a great sense of the all too relatable awkwardness of trying to strike up conversation with someone you used to know well but have drifted away from in the years. Throw in the tense delivery of Akane’s pointed questions for Rikka and you have something really well executed. It’s an intentionally clumsy conversation that has just enough malice underlying it to keep us on our toes. Later on, when Akane and Rikka get dragged to the mixer, we get some even better pieces of simple but highly effective characterization. The way Akane instantly recoils from both unwanted verbal conversation and physical contact speaks volumes of her character. It’s not necessarily breaking the mold, but lesser anime would have simply resorted to unwieldy 3rd party exposition. Gridman’s surprising amount of restraint continues to be one of its strongest areas.

And that isn’t to say the rest of the episode is particularly lacking either. We get another rather decent action sequence, this time referencing the classic Inazuma/Rider Kick. There’s something utterly delightful to me about a robot getting giant arm upgrades and then using said giant arms to kick better. It’s silly in all the right ways and speaks to my own personal sensibilities that I feel Gridman is balancing so well. I definitely had a good laugh at the visual gag of Max chewing on a piece of toast with zero indication of how he managed it and zero reaction from anyone else. The way it manages to blend its humor with its narrative is worth pointing out. Moments like Gridman’s super transformation failing because Junk doesn’t have enough memory handle so many transformations or Rikka saving the day by simply unplugging the computer and then plugging it back in are a great example of Trigger’s handle on all aspects of Gridman, both subtle and bold.

In general, there isn’t much more to say about this episode specifically, though that isn’t a slight against it. Gridman continues to build upon the excellent foundation its established for itself and it’s a good sign that it’s been able to settle into this mostly solid routine. That said, I feel this show caught all our attention largely because of its ability to catch us off guard with its mysteries, so here’s hoping it keeps building on that as well.