Even though Yuta has lost his memories, he’s happy making new ones with his loving girlfriend Akane. Hey, wait a second…

One of the most impressive qualities we’ve seen in Gridman over the weeks we’ve been watching it is how it continues to take stock genre tropes and storylines and present them in fresh, interesting ways. Thing is, it’s not doing this by radically deconstructing or reimagining them, but instead by paying careful attention to maximise our investment in the characters and plots it’s telling. So while the plot of this episode is something that’s been done many times in many different types of story, the care and attention paid to it makes this perhaps the finest chunk of Gridman yet.

Perhaps the most interesting thing about the ‘trapped in a dream’ storyline is how much it reveals about the puppetmaster, rather than the dreamers. The standard trope for the ‘trapped in a dream’ storyline is to imprison our characters in a fantasy that’s so personally tailored to them they (theoretically) will accept it unconditionally. There’s certainly overtones of that here, and ones which smartly play off of established character subplots – Sho’s attraction to Akane and desire for someone to share his nerdy passions with, and Rikka’s desire to become closer to Akane and rekindle their friendship. In both of these cases, Akane has a logical place in the dream, since she’s part of the subject’s desire of a perfect world. But what’s really interesting is how she decides to make herself the focal poinr of Yuta’s dream, even though they haven’t really been shown to have any history together. It’s a fascinating insight into her headspace – just as in real life, she can’t help but make herself the centre of the entire world.

In fact, this entire episode offers us perhaps the deepest dive into Akane’s psyche the show has yet offered, and once again confirms that the story doesn’t just view her as an antagonist, but as someone who is deeply broken in her own right. It’s been obvious for a while that she’s attracted to Yuta in a much more personal way than merely as an enemy, yet it’s also been clear that she lacks the emotional maturity to actually understand her own feelings. That’s made obvious in her choice of dream for Yuta, which drops him into his exact memories but with Rikka replaced by Akane. She doesn’t even bother to change the locations or swap Rikka’s mother for her own. It’s an exceptionally clever trick by the production crew, as it allows them to both play with the audience by repeating the opening moments of episode 1, and at the same time give us some insight into exactly how Akane’s mind works. This pops up in both of the other dreams also, with Sho and Akane at the magazine rack, and Akane and Rikka on the bus both shot-for-shot echoes of earlier scenes.

It’s all part of the absolutely outstanding visual storytelling which is the other pillar of this episode’s greatness. The staff at Trigger adopt a looser, more fluid and ‘cartoony’ look for large parts of this episode, which helps with the fever-dream atmosphere, and there’s some incredibly good directing to go with it. Visual flourishes like the very brief glimpses of Gridman in the background, on posters, in reflections etc (which increase in number and decrease in subtlety as the episode goes on) or the contrasting shots of Akane and the Gridman Alliance running in opposite directions, shrunk into the corners of the picture, are incredibly important at conveying emotion and themes more effectively than narrative ever could. There’s some outstanding use of pathetic fallacy here also – contrast the grimy, grey and perpetually raining ‘real’ world with the sunny blue skies of Akane and Yuta’s dream, or notice how Rikka’s starts on a beautiful spring day but gradually darkens until we reach dusk, long shadows and waning light casting over everything. 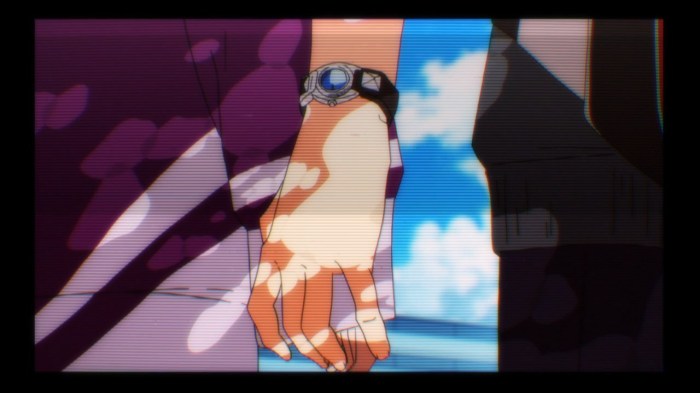 Despite all the heavy stuff happening, Trigger also remember to keep their ongoing plots churning at a nice pace, and that means that the episode doesn’t get too bogged down in dream exposition. There’s still a bunch of fun, interesting stuff happening away from the main plot, and we continue to get fun comedy bits with the Neon Genesis gang, as well as some great action when they combine. There’s small but meaningful movement on the Anti front too. One of the strengths of Gridman is the way it’s good at making sure that there’s little tidbits for everyone, and this episode is a prime example of that, making the move in and out of various plots and focuses much easier to handle.

Overall, this was a spectacular episode on almost every front, and an obvious standout even in a show that’s been full of excellent stories. With the final few episodes looming in front of us, Gridman is set up for a terrific finale, and based on the evidence, I’ve got no reason to doubt it’s going to deliver.

In some ways, Gridman continues to be the most and least Trigger-like show the studio has ever put out. Like Kill la Kill, every episode astounds and entertain in ways I wouldn’t have thought possible based on the prior episode. Yet somehow, Gridman continues to impress me even with its ever rising expectations. But the way Gridman does it with this episode harkens back to the best of what Gridman established in its earliest moments. Fitting, considering the episode makes some extremely smart references to its earlier plotlines with a kind of unnerving twist that immediately puts you off in the best way possible. It trades in a slow creeping mystery that we only understand now thanks to hindsight.

Long story short, Akane’s latest plot is maybe her most devious and most tragic, using a Kaiju that puts our heroes in an endless dream where Akane is the friendly and popular figure she’s convinced the rest of the world she is. In many ways though, it’s as much a dream sequence for Akane, presenting a world in which she isn’t the isolated misanthrope she truly is. If a story is only as compelling as its villain, then this episode does an amazing job of communicating Akane’s crushing loneliness while never exonerating her of the terrible things she’s done. Indeed, it’s Yuta looking at Tonkawa’s gravestone that reinvigorates our hero to break out of the dream. A shoutout to the fantastic character work when our trio break out of the dream. You could argue this sequence is a culmination of their character development in the sort of economical way a 12 episode anime has to. Yuta firmly believes we can’t remain in our delusions. Sho accepts that there’s a world where he and Akane could have been friends, but the false world Akane has created cannot be it. Rikka has come to terms with the truth that her feelings for Akane are entirely fabricated and must escape entirely.

The episode represents the storyboarding debut of Trigger wunderkind, Kai Ikarashi, and it’s something to behold. It might actually be Gridman’s most effectively visually directed episode yet (barring a kind of underwhelming battle scene), utilizing a whole bag of tricks to tell its story without relying on any extraneous dialogue. I’ve always said that Trigger are the low-key masters of shot composition and nowhere is that more apparent than episode 9 of Gridman. The usage of foreground elements to frame Akane in increasing suffocating compositions is unbelievably well done. The usage of bright primary colors during the dream sequences create an immediate dissonance with the desaturated overcast of the rest of the show. The ending sequence with our trio running to the left away from the dream juxtaposed with Akane running to the right and being oppressed by images of Gridman is a truly excellent moment. There are just so many powerful shots and visual storytelling techniques used in this episode to highlight each individual one, but it speaks to Trigger’s surprising ability to handle depths we never expected from them.

And yet in spite of all these radically interesting creative choices, Gridman’s narrative progression is in many ways, as traditional as you can get. That isn’t an insult at all. It would be disingenuous and perhaps even insulting to the giants it stands on to say it’s doing something entirely different from its spiritual predecessors. Instead, it accomplishes its heights by using those familiar tropes and iconography in novel ways in conjunction with unfamiliar visual storytelling. It’s created something wholly unique, and more importantly, something that consistently surprises and entertains every week. With things building to a crescendo in its final episodes, I truly cannot wait to see how Trigger decides to finish this.