Girls are disappearing, Kirima Nagi got suspended for bringing cigarettes to school, there might be a man-eating serial killer on the loose, and the mysterious figure known as “Boogiepop” seems to be related to it all.

This seems like a show that’s doing its damndest to be weird and mysterious and creepy, but it’s a real mixed bag. I’m definitely intrigued by all of the supernatural happenings going on and I’m into the tone of the show (it feels like it’s setting up an early Persona game), but to what end? Boogiepop and Others is quite difficult to follow, and is slow paced enough that calling it “dull” might be an overstatement. It doesn’t seem like the kind of show to drop definitive answers on anything, so the obvious question is if there’s actually any substance or if it’s all just obscure for the sake of being obscure. I’ll give it another couple of episodes to see if it keeps my interest, but expectations aren’t exactly high. 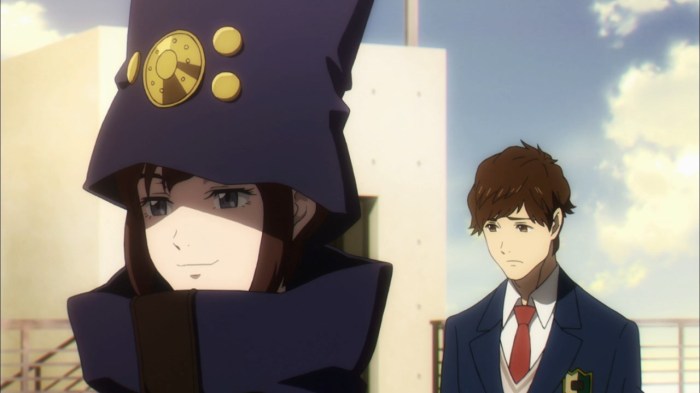 I am of two minds when it comes to these beginning episodes. The first episode was just way too slow, and seemed to be made on a shoestring budget. We don’t get much insight into the characters, nor do I think they do a good job of making us understand just why Boogiepop is important. Then, in the second episode, we basically get too much, as Nagi comes into the spotlight. This time, the problem is a tortured amount of exposition that makes the two or three seconds of actual action way too sparse to be actually entertaining. Maybe the show can bring another angle and it will improve next week, but unless the entire season is a bust, this isn’t going to be enough to keep my attention.

I seem to be at odds with a lot of other anime bloggers out there, but had it not been for my sheer frustration at Boogiepop’s numerous failings, I would likely have fallen asleep during this episode. And given that it features mysterious disappearances, possession, murder, and man-eating creatures of legend, I’d say that’s quite a feat.

One of the biggest problems here is that the debut consists almost entirely of dialogue, very occasionally broken up by half-second flashes of potentially interesting things that are never returned to and never explained. Events are both introduced and apparently resolved off-screen while the dialogue itself – almost all incidental – is so poorly written that it often comes across as virtually nonsensical. Meanwhile, the scenes jump around like crazy with no indication of how much time has passed or what’s gone on in the interim. Far from establishing an unsettling and/or creepy atmosphere (which I can only assume was the intent), it feels more like the creators had no idea what was going on either and just started doing mad libs in an effort to at least make something interesting out of the whole mess. They did not succeed.

The final nail in the coffin is the technical quality, or lack thereof, resulting from either a shoestring budget or some of the worst visual direction I’ve seen in a long time. The episode is littered with still frames, almost hilariously nondescript backgrounds, close-up shots of people’s shoes, and characters that are literally faceless. The background music is an excellent match, which is to say that when I did notice it at all, it was only because of how bland and out-of-place it sounded in comparison with the (again, primarily off-screen) events allegedly taking place.

In short, the writing’s already on the wall for Boogiepop as far as I’m concerned, and anyone wanting a decent horror anime should certainly look elsewhere.

3 thoughts on “First Look: Boogiepop and Others”