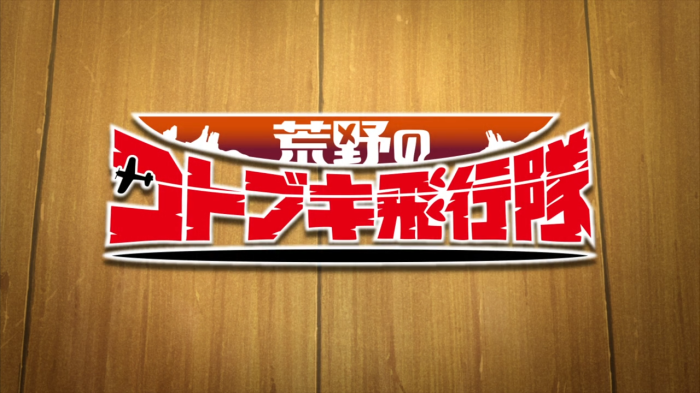 Alternative title: Kouya no Kotobuki Hikoutai, The Other Anime with Girls and Planes this Season
Anime original by Gemba
Streaming on Hidive

The Kotobuki Squadron are mercenary pilots for hire, flying their Hayabusa fighters in a vaguely apocalyptic frontier. There they fight it out with sky pirates and enemy aces in remarkably accurate dogfights.

The Magnificent Kotobuki is a strange anime, but one I can’t help but deeply respect. Despite its awful jarring mix of competent hand drawn animation and ugly cg characters, there’s something to this anime. Much of this is found in its primary saving grace, that being its meticulous attention to detail in the portrayal of its primary vehicle. After we get past the simple introduction of our cast of female mercenary pilots, we’re treated to a lovingly rendered minute of a Ki-43 Hayabusa’s startup sequence, down to testing the flaps in all configurations and repeating lever tests. It’s the first indication that if nothing else, this is a show made by people who clearly love planes. We’re treated to a 10 minute aerial dogfight that is remarkably accurate in its portrayal of WW2 era air combat tactics and maneuvers. I won’t lie, I was kind of awestruck. No anime powerups, no bullshit tactics, just pure technical dogfighting. I’m talking accurate barrel rolls and diving maneuvers here. True ACM, lovingly rendered and presented. Compared to Girly Air Force’s lip service to air combat, The Magnficient Kotobuki is a grand commitment to the craft.

Now, is this going to be enough to convince most people to watch this? Frankly I’m not so sure. The baffling choice to have both 2D and 3D animated characters interacting with each other never stops looking bad. The characters themselves are inoffensive anime archetypes at best. All in all, devoid of the anime’s devotion to portraying compelling and realistic aerial combat and hardware, it really doesn’t have much else going for it. Still, I haven’t seen such a love letter to planes since maybe Area 88 or Macross Plus. That alone has my attention, even if the rest of the anime seems to be doing everything in its power to dissuade me.