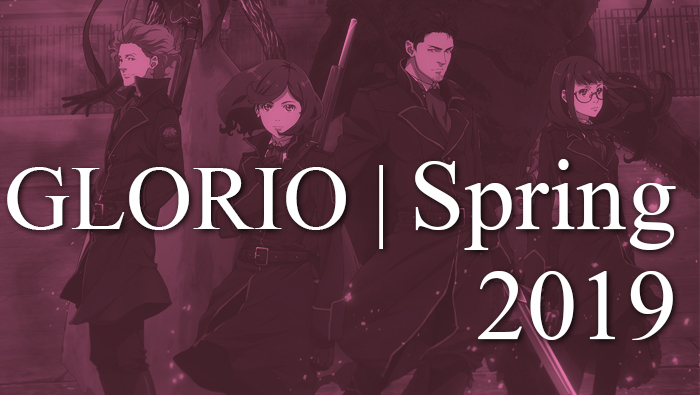 The last shows of winter have barely had time to finish, but there are no breaks here at The GLORIO Blog! We kick of the Spring 2019 season with part 1 of our preview guide, featuring the return of shoujo classic Fruits Basket and P.A. Works taking another stab at dark action fantasy with Fairy Gone.​

If you are new to the GLORIO preview guide, we generally only cover new shows and omit recent sequels or shows continuing from the previous season. We don’t want to leave you completely hanging though, so here’s a list of the notable series that will not be covered in the guide:​

Now, on to the previews!

YU-NO: A Girl Who Chants Love at the Bound of this World

Dude gets a package in the mail from his missing father with a device that lets him travel to parallel dimensions. This being a mid-90s adult visual novel, pretty sure that means he gets to bang a bunch of attractive anime ladies without consequences. I suppose I shouldn’t be so dismissive of a story that people still care enough to adapt over 20 years later, but I feel like even the best VN’s are going to have a hard time winning me over in 2019.​ What I’m saying is I’m salty feel is making this and not Hinamatsuri season 2.

I guess we can pencil in a slot every season for a revival of a notable anime series from 15-20 years ago, and this time we get early 2000’s shoujo staple Fruits Basket. I’ll admit I never saw the original so I’m curious to finally see why it was such a big deal. That said, we have a LOT more shows about nice girls finding themselves living with a group of cute boys with a dark secret these days. I have to wonder how well the series’ premise holds up. The remake looks nice and they are planning on adapting the entire manga, so let’s see how it goes.

Beyond of Being Alone

This is a show about an extremely shy girl who is forced to make friends as she enters middle school. If there’s a hook, I guess she seems to suffer from legit social anxiety and will even start vomiting around new people, but the lighthearted tone of the trailer tells me they’re not going to take that very seriously. It seems… fine. The art is nice and it doesn’t seem like they’re making it into pedophile bait, I’m just not seeing anything particularly notable yet to make it stand out from the crowd of similar shows.​

The only thing notable about this show is that it’s being developed by ufotable, most famous for their work with Type Moon (Garden of Sinners, Fate/Stay Night), but in general are dependable for a top-notch production. In that regard the trailer certainly does look great, no surprise there. Unfortunately the actual source material seems to be the most generic, uninspired Weekly Shonen Jump setup this side of Black Clover: a boy in medieval japan becomes a demon slayer to avenge his dead parents and save his sister, who has been turned into a demon. Yawn.​

Our main dude wants to make a better life for his poor family and has been working hard in school to get a good scholarship. He gets the scholarship under one condition: he must tutor a bunch of his classmates who are all cute anime girls! I’ll be totally honest, a slightly pervy harem comedy makes me feel a little nostalgic these days, but I also can’t say this looks good by any means. The comedy would have to be extremely sharp to win me over. I’ll give it a shot, but expectations are extremely low.​

It’s a school club show, and this time the random activity is playing the koto. It’s by a relatively unknown studio attempting their best Kyoto Animation impersonation. NEXT!

Magmell of the Blue Sea

At first glance, I thought the premise of this sounded cool: a new continent has appeared in the pacific ocean and an expedition goes to check it out, just like the explorers of old. Then I saw it’s mostly more Shonen Jump nonsense with dudes shooting energy balls at each other and… meh. Maybe this will become a hipster pick for shonen fans who are tired of the big name shows, or it will latch on with people who like seeing animals get murdered. Either way, I’m not feeling it.​

A young woman is the sole survivor of a mysterious incident that destroyed the entire city she lived in. She teams up with some dude to figure out what is going on. Somehow, there are idols involved. This seems to be going for a sci-fi mystery thriller thing so it’s hard to pass judgement right now, but I will say at first glance the super colorful design choices seem to clash with the mood their trying to set. Makes me wonder where the priorities are here.​

Somewhere in vaguely-turn-of-the-century-not-Europe, humans figure out how to extract super powers from fairies. To keep things in check, they form a squad of fairy cops to police fairy-related crimes. With Sirius the Jaeger still lingering in our memories, I’m all for P.A. Works adding more “dark action fantasy” to their repertoire. That said, I get the impression this show might be taking itself too seriously, a pitfall that most series of this type fall into. I’m willing to give it a chance for now.​