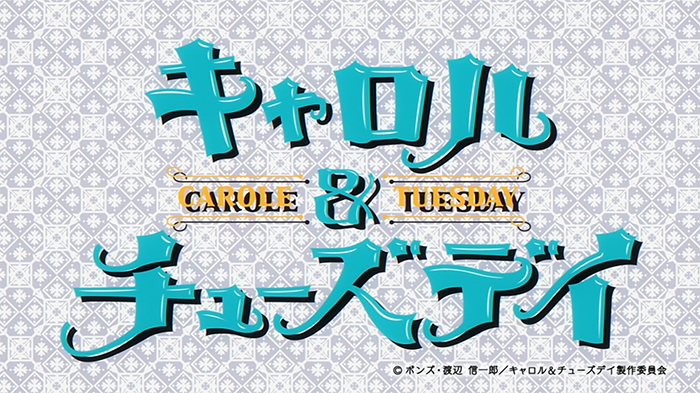 Born into a wealthy family in a provincial town, Tuesday dreams of becoming a musician – something nobody around her seems to understand. Meanwhile, a similarly aged girl named Carole, scraping a living in the metropolis of Alba City, has the same aspirations. When Tuesday runs away and the pair chance to meet, they aim to make their shared dream a reality.

Carole & Tuesday is certainly one of the strongest debuts of the season, but I feel like that’s not saying a whole lot, given how bored I’ve been with pretty much every new release thus far. If that sounds overly cynical of me, it’s only because while Watanabe Shinichirou is an enormously celebrated director, I’m anxious not to give this show a pass simply because of the name behind it. I want to watch an anime that’s good in and of itself, with no major caveats – not an anime that’s passable and that I’m watching just because I feel some kind of obligation as a fan to do so.

There’s still a lot I’m unsure about here, mostly because as yet, I feel no immediate connection with any of the characters. I also can’t help thinking that, for a series set on Mars fifty years in the future, surprisingly little has changed about the world as we know it today, with Instagram of all things still apparently king of social media and the biggest technological advance being self-wheeling suitcases. That said, there’s something about the presentation of all this that feels a lot bigger than what’s actually revealed to us, so I can’t help but wonder if Watanabe is deliberately holding back for some reason. I don’t know what that would be, but there’s a definite sense of wonder and anticipation in the air, and that naturally makes me want to stick around for more. Needless to say, this is helped along plenty by the lush production values, which are leagues ahead of anything else going on this season, even if I’m a little underwhelmed by the musical aspects so far. Overall, it’s a decent, if not quite amazing start to a show that certainly succeeded in arousing my curiosity, and I’m excited to see where it goes from here. 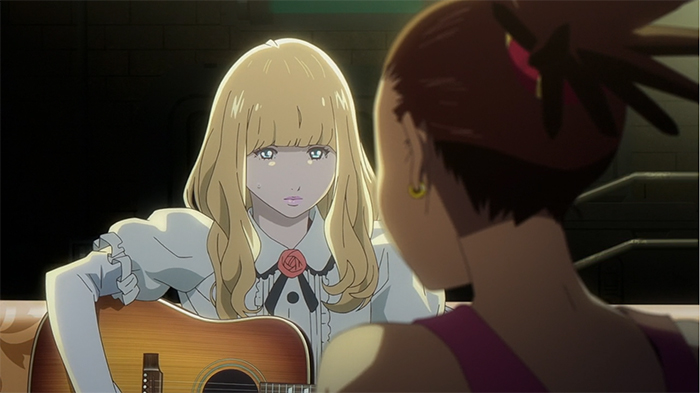 Jel’s verdict: I Want That Guitar

I really enjoyed this episode. The characters and setting feel refreshing compared to most other anime. I like the natural bond that Carole and Tuesday instantly form, as well as the depiction of the awkward but magical process of creating new music with someone. So long as that stays the heart of the show, I think this will be good.

I’m much less interested, even a bit turned off by the overall plot and theme. Having our duo essentially rise up against the computer generated music of their era feels a bit like Watanabe lashing out like a grumpy old man. I get it, I prefer “real” music myself, but if people are enjoying it then I don’t think how it’s made is really all that important. That’s not enough to deter me from enjoying the show though, and at this stage I’m looking forward to more.

…seriously though, I’d love to have Tuesday’s Gibson Hummingbird guitar but those things go for like $5000 by today’s money. I can’t imagine how much it would be worth on Mars hundreds of years from now.​ (Aqua edit – Bold of Watanabe to assume Gibson will still be in business at that point.)

Aqua’s verdict: Music To My Ears

Carole and Tuesday isn’t just Shinichiro Watanabe’s first proper anime project since 2014’s Terror in Resonance, it’s also studio Bones’ twentieth anniversary project, and it’s clear that studio isn’t planning on cutting any corners. Breathtaking character animation and subtle integration of CGI are one thing, but one needs to have a look at the astonishing lineup of composers who’re putting their weight behind this project in order to truly grasp just how ambitious the whole thing is. The score was composed by Mocky, who previously wrote radio hits for singers like Feist and Jamie Lidell, while what I’m assuming will be the in-universe pop songs were worked on by people like electronic jazz producer Flying Lotus and frequent Kendrick Lamar collaborator Thundercat. The first hints of music we’re getting in this episode are pretty sweet, the ending song “Hold Me Now” especially standing out as a twee bop that cements the pop-R&B vibe Carole and Tuesday seems to be making its equivalent of Cowboy Bebop‘s jazz, Samurai Champloo‘s hip-hop or Terror in Resonance‘s haunting post-rock.

Is the vehicle any good, however? Suffice to say, Carole and Tuesday‘s pilot is one of those once-every-half-a-year premieres, an episode that achieves everything it sets out to achieve and leaves viewers wanting more after the credits roll. For once, binging this series on Netflix when they release it in, like, 2022, doesn’t seem like such an unappealing idea after all, and that’s rather remarkable given the fact that this here seems to be not an action thriller or space opera adventure, but essentially a laid-back slice of life dramedy. Nevertheless, the characters are likable, the direction is predictably top-notch, the worldbuilding is surprisingly solid — save for the weird assumption that Instagram will still be a thing on a terraformed Mars 50 years from now — and perhaps most interestingly, the appeal is broad. Heck, with some framing, I could probably get my folks to watch this, and that’s not something I say lightly. After all, what’s not to like about two girls from very different backgrounds rebelling against the heinous reign of algorithmically generated pop with the power of… okay, admittedly pretty much also algorithmically generated pop but at least it’s presented as if they wrote it themselves!