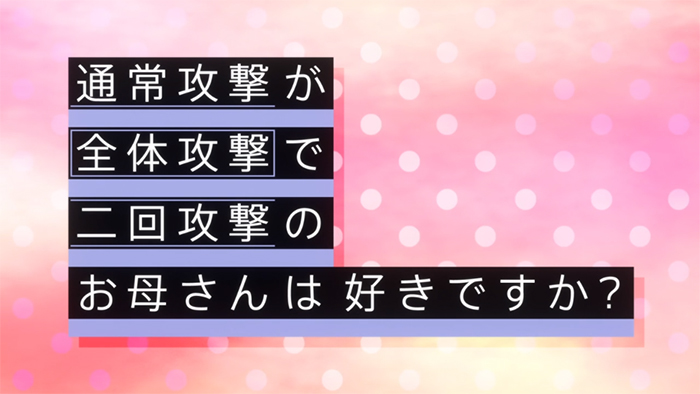 After filling out a shady survey, Masato aka “Ma-kun” is sucked into the beta of a new, extremely realistic fantasy online game. The catch? His mom is there with him.

I’m happy to report this show (which I will refer to with the semi-official title Okaasan-Online for short) is not isekai power fantasy trash, at least based on the first episode. It appears to be a heart warming comedy masquerading as a satire of said isekai shows. Think Konosuba before it turned into the trash it was parodying. I put emphasis on “based on the first episode” for a reason, but more on that later.

As long time readers may know, dumb comedies with heart are my thing and this episode delivered a solid dose of that. The humor ranges from dry and self-aware to extremely stupid, both of which I love. Your mileage may vary depending on your own sense of humor. Many of the jokes are at the expense of the main character, who is designed to be your typical isekai power fantasy protagonist but is constantly getting knocked down a peg by everyone around him. I’ve heard a lot of people complain about him being boring and annoying which is accurate, but that’s kind of the point.

At the heart of it all is the relationship with Masato (or “Ma-kun”) and his mother (Mamako, yes, “Mama”ko) which thankfully is pretty normal. Ma-kun gets embarrassed and resentful as some teenagers do, but it’s clear that deep down he loves his mom and her two-hit multi-target attacks. In fact, it’s strongly implied that his mother set this whole thing up as a way to spend time with her son doing something that he would enjoy. It’s sweet and innocent to a degree that I did not expect.

I was 100% on board with all of this until some red flags popped up in the final scene. Ma-kun asks Mom to help recruit a group of cute girls as his traveling party, and Mom says it will be just like her interviewing a new girlfriend or wife. This isn’t bad in itself, but there’s a couple ways this could go. Ideally Ma-kun will try to get with the girls but mom embarrasses him and hilarity ensues. On the flip side, this could just end up being a normal harem anime and one of the girls happens to be his mom. I’d like to say I believe the former is what we’re getting but the next episode preview (in which mom is at a hot springs and her clothes get blown off) makes me worry about the latter.

Look, I’m a simple man. I like dumb comedies and I like hot moms. So long as Okaasa-Online can avoid going incestuous I’ll probably enjoy it to some degree. I hate that I have to say that, but given the history of anime and light novels it must be said. I think we’ll have the full picture of what this show is about next episode, so I’ll save final judgement until then.

2 thoughts on “First Look: Do You Love Your Mom and Her Two-Hit Multi-Target Attacks?”