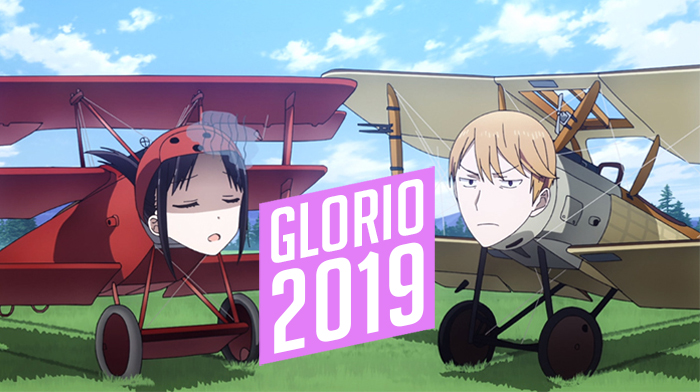 Ciao tutti, while my living situation has been certainly interesting over the past year, 2019 will go down in history as a pretty bad year for anime. I barely watched any comedies or romances, and even the ones I did were not all bangers. Thankfully, we still got a few diamonds in the rough, with Kaguya-sama being the clear star of the show. In such a disappointing year what took the coveted #HATEWATCH? Was the selection of OP/EDs so bad I just defer to Gee’s post for this years winner? And can any normal teenage hormones compare with the likes of Anna Fugo? 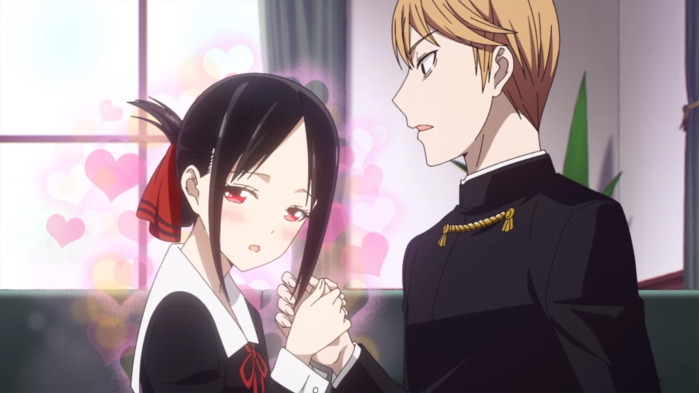 Kaguya and Shirogane-Kaguya-sama: Love is War

It’s refreshing to get a good ol’ romantic comedy in the vein of Nozaki-kun, a banner Kaguya-sama took up with stride. No better example of that than the main duo of the eponymous Kaguya-sama and her frenemy with benefits Shirogane. I love it when a show can string along the romance without it feeling too forced or unsatisfying. Kaguya-sama accomplishes it by establishing the stubborn personalities of its main duo very early on, making their collective pride as much of a character to exploit in the show as their ridiculously naive romantic desires.

Kazusa and Izumi-O Maidens in Your Savage Season

I wanted to really like this show. It seemed like it would really try to tackle the awkwardness of teenage angst and sexual attraction, but in the end Mari Okada succumbed to her worst tendancies and gave us another slapdash blitz to the end. While I initially enjoyed the angst between the two of them, it grew very tiring very quickly. It didn’t help that the initialization of the tension, walking in on him jacking off, was so outlandish that it made the whole thing harder to take seriously. Even then, it seemed like the show was finally letting itself stabilize at the culture festival when the two of them finally came to terms with their feelings, but it seems almost like Mari Okada forgot she had to tie up other plot threads, and thus used them to wreak havoc on the character development she just accomplished. By the end, the whole relationship fall flat, and O Maidens joined the cavalcade of other shows that tripped on their own feet on the way to the finish line.

The 3nd Annual #HATEWATCH for Biggest Load of Bull

As a four-year tennis player in High School that only managed one win, I can sympathize with the majority of the Stars Align cast in their dejection. Tennis is not an easy sport, and the finesse required to use a racket well is not something you gain overnight. Well, apparently unless you’re Maki Katsuragi, who was recruited solely on his speed and stamina but also somehow immediately knows not only how to use a tennis racket but also advanced team strategies. I have multiple problems with this show, which seemed to have such a promising start in its first episode, but my personal experience with the sport just never allowed me to get over the idea that Maki was able to be so good so fast, especially compared to guys who at least had been using a racket for a full year! I kept expecting the other shoe to drop and get an explanation why Maki is hiding the fact he clearly used to play tennis, but it just never came. He just is simply that amazing. And for that, I call bullshit. 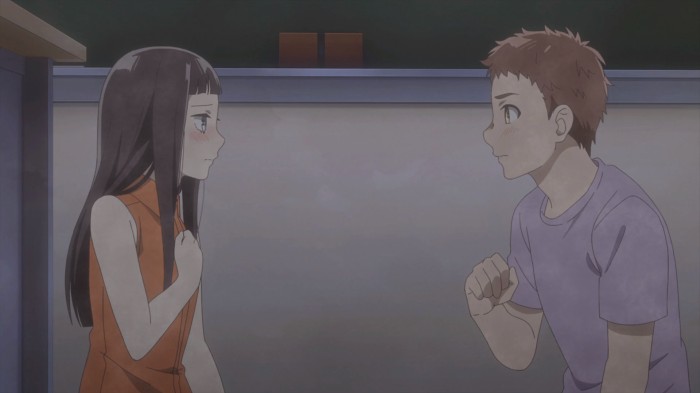 Sonozaki and Amagiri-O Maidens in Your Savage Season

Granted, I didn’t watch every show that came out this year, but it was refreshing to see how Sonozaki changed throughout O Maidens, truly maturing, which you can’t really say for the rest of this cast. I also appreciate that her romantic story was the one least fixated on sex itself. Through her own development, she sees that relationships are about more than physical attraction, but shouldn’t be divorced from the realities of physical interaction. What puts her over the edge is her loyalty to her friends at the end of the show. She could have easily betrayed Hongo, and yet instead was willing to take the brunt of the shame and overreaction of the school. By far the healthiest character in this messed up soap opera, I was always glad to see her come onto the screen.

The Golden Sawako for Excellence in Not Making Out Already 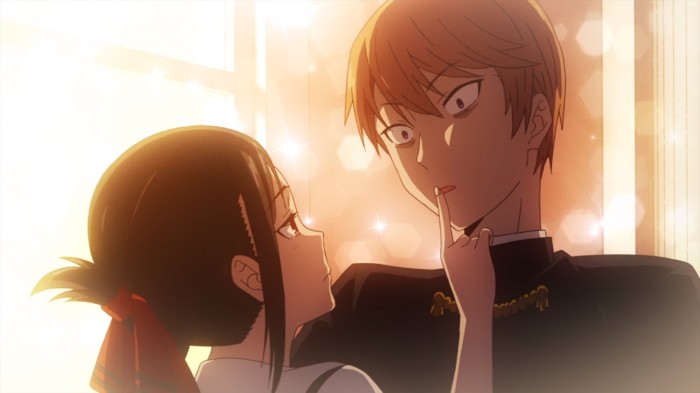 Kaguya and Shirogane-Kaguya-sama: Love is War

This show being a rom-com, you can’t very well have the pair actually get together, and thus the eternal dance plays on in another form. As stated earlier, it is nice to see a (somewhat) reasonable idea for why two people obviously attracted to each other wouldn’t just get their act together and pair up: They’re both brilliant schemers and such insane go-getters that neither of them could possibly stand to be the first one to give up. Thus starts a battle of pride that takes us from their relatively mundane council-room to dueling words with foreign dignitaries and imaginary biplane battles. There’s still enough sweet scenes to make you actually root for them to finally get together even if you know it’s never gonna happen. With a second season soon coming, I can’t wait to be wrapped up in it yet again.

The Most Dysfunctional Relationship 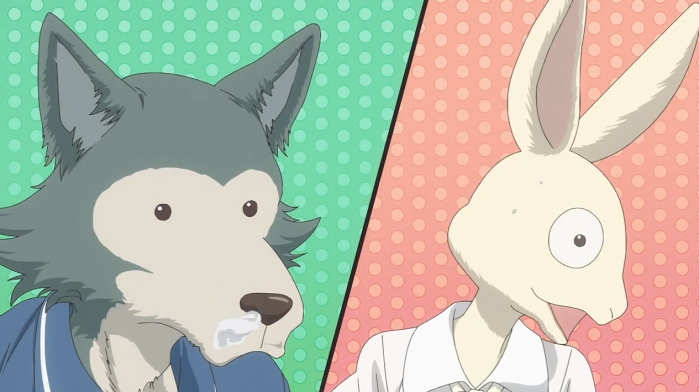 Granted, this isn’t the most dysfunctional because they’re terrible people, more just… *gestures at a wolf and a rabbit in a romantic relationship*. Still, Beastars managed to nail this odd star-crossed lovers tale and fully explore the contours of this world where beasts must grapple with their instincts and the dirty truth of society, that most people chose not to but pretend they did. Legosi and Haru both see themselves as victims of their bodies: Legosi hates the danger his power holds while Haru resents the pity her small and powerless form engenders in those around her. They both seek a way to live genuinely in their society, and find different ways to subvert their natures. Questioning how these two disparate personalities will ever understand each other is fascinating, and the loving care Orange has given to this series leaves me waiting with bated breath to see where their journey will take us next.

I may have been a bit too optimistic giving black comedies their own category last year, nothing came to take Asobi Asobase’s place and so what comedies we did get were primarily of the heartwarming variety, so I’m going to collapse the two into one. Given you’ve read this far in, its no surprise that Kaguya-sama takes home this prize in a landslide. Cute, crazy, charming, colorful, there’s a lot to like about this humble little adaptation that played to all of anime’s strong suits in order to create an entertaining story from start to finish. If you’re looking for a pick-me-up from this past year, you’ll do yourself well to pick this show up.

Bro of the Year A.K.A. The Iskandar

But that’s not really fair, so for a runner-up:

Chika is the classic rom-com character who knows a lot more than she lets on, and uses their clueless facade as a way to bring the main pair closer together. This is a task she accomplishes with aplomb, creating some of the funniest scenes of the year. No greater example of her bro-ness can be found than when our main man Shirogane realizes he can’t play volleyball to save his life, and enlists Chika in an attempt to save his reputation. The sequence has this great mashup of Nichijou and Rocky as your standard training montage gets run through with ridiculous sight gags. By the end of the series, doing everything she can to help Kaguya see some festival fireworks, she truly cements her place as the gal you want in your corner. 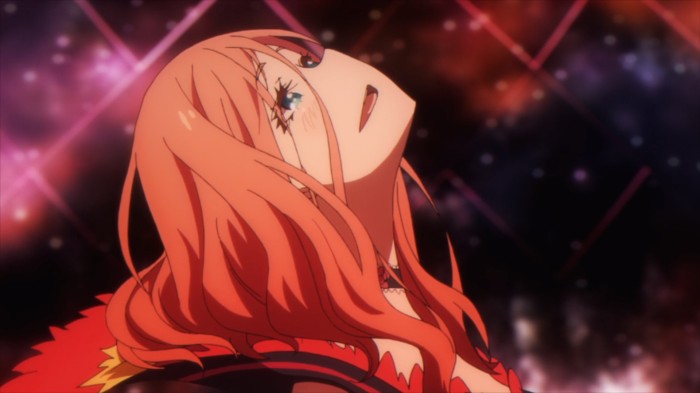 Anna Fugo is a master class in villain writing. She has no grand plans, no greater good that she pretends to strive for. She is motivated by jealousy and rage. And yet, she is more relatable than a thousand would be bad guys that have come before her. The secret comes not from how she treats others, but how others have treated her. Far too often, the hero is seen as a passive recipient of the villain’s schemes and bile. Their attempts to foil the villains plans are not personal slights, but inconveniences on the path to domination. For Anna, she is treated by our heroes like nothing more than a pitiful child. Lied to by her family about her power, belittled by her own best friend to her own abilities, she sees her villainy as a righteous indignation at how others would treat someone they supposedly love. Her powerlessness is finally reversed, and her response is sheer joy. In her warped victory she sees herself as free of her chains, finally able to enjoy her lot in life, and thus her brutal destruction of Ernesta becomes an ecstasy the likes of which I doubt we’ll see for some time.

Man, I predicted a disappointing season going into the new year last time around, I wasn’t expecting that to turn into a disappointing year. Still, with a bajillion shows coming out ever year, there will always be enough for me to enjoy and talk about with the GLORIO crew. While our fire for long-form blogging has dwindled with the quality of the industry’s output, I’ll never turn down an opportunity to chat with my friends about the latest season. I hope you’ll continue to join us. And even if anime continues to be a chore, at least we’ll always have Legend of the Galactic Heroes.