Mikoto Misaka and the rest of the Railgun crew get ready for their take on the Daihasei Festival arc. 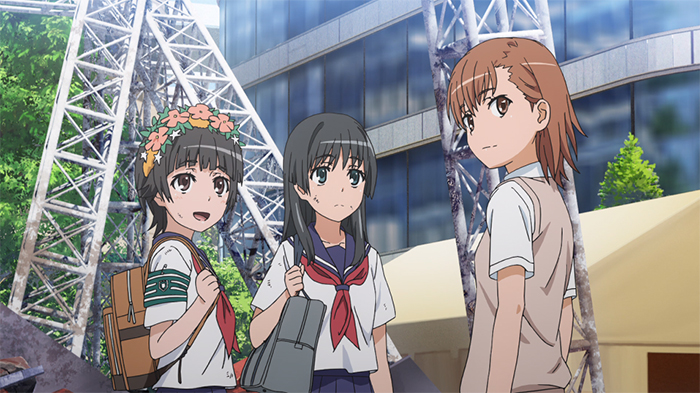 Jel’s verdict: SHE IS COME BACK!

It’s been awhile, so reminder of my take on the Index/Railgun universe: the original Accelerator arc is the best the franchise has ever been and ever will be. It produced the best part of A Certain Magical Index way back in season 1, and it produced the best part of A Certain Scientific Railgun nearly seven years ago when we last saw this series. That arc is such a good encapsulation of everything the series does well that they have not been able to recreate the magic since.

This is my roundabout way of saying I don’t expect this season of Railgun to be as good as the last. That’s not to say the components aren’t all here. We are re-introduced to all the characters, Kuroko is still a pervert, and Mikoto gets to railgun something by the end of the episode. Everything is exactly where we left it.

The new elements here are a larger role for Shohouko who seems on track to be the main antagonist, and a new guy I’m just calling One Punch Man. He seems well intentioned but also totally oblivious to the impact of his powers. Will that be enough to create a story as compelling and fun as the Accelerator arc? History says no, but I think there’s still some hope. The back half of Railgun season 2 was not as good but still entertaining. If this season can just clear that low bar, I think I will be satisfied.

Zigg’s verdict: She Blinded Me With Science

Last time we did a First Look at a Railgun show (a mere SEVEN YEARS ago) I was deeply skeptical and then promptly had to eat a massive amount of crow as the show turned out to be one of the best of the year. That series did have the advantage of the ‘Sisters’ arc, undoubtedly the best and most coherent plot the Index-verse has ever produced, but it also highlighted that the core Railgun cast is just damn fun to hang out with.

That continues here, with an opener that’s fairly inconsequential but has just enough personality from the core 4 girls to sparkle. I’m still not a huge fan of eternal pervert Kuroko but the ensemble still work great together and I’m digging the seemingly bigger roles for Shohouko and Mitsuko. Academy City remains a vibrant setting full of possibilities and while the art is simple the bright, vibrant style does a lot. I don’t expect Railgun T to be earth-shattering, or even as unexpectedly strong as Railgun S was down the stretch, but I think it’ll be a fun way to spend time every week.