Oda Nobunaga and other famous Sengoku era warlords are reincarnated as pet dogs in modern day Japan. That’s it, that’s the joke.

Jel’s verdict: At least check out the ED

I guess we’ve seen Oda Nobunaga turned into an anime girl enough times that the people that make anime have finally had enough. Turning him into a Shiba Inu is a pretty solid move, and seeing the powerful, ambitious Nobunaga trapped in the body of a cute lil’ doggo is a pretty solid joke. The first episode was entertaining in that dumb, loud, absurd kind of way that anime comedies can be.

The problem is there is not a deep well of humor to go to here, and I was already getting tired of the “the” joke, the one joke they have, before this episode was over. I think it’s all downhill from here, so I’ll probably just move on. I will give them credit for doing the ending song and episode preview with real dogs though. Maybe a live action version would be better? 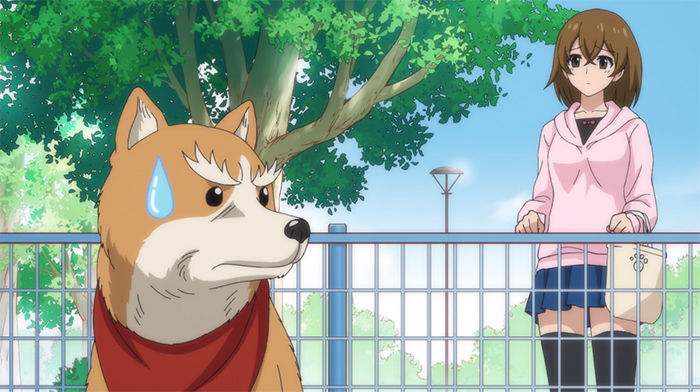 Euri’s verdict: Keep your feudal lord on their lead at all times

I feel like there’s a lot of potential in a show where someone like Nobunaga is reincarnated as a dog, even as over-saturated as that very specific market already is, but I’m not convinced this is the way to go about it. Meeting a bunch of other dogs who are also ex-feudal era big shots is pretty funny, and the discussions they have about their past lives are probably the highlight of the episode for me. But there’s Nobunaga’s owner, who is in the majority of scenes, and we know next to nothing about her. There’s also not a lot of humour to be had in Nobunaga getting treated like a dog when the owner isn’t aware of anything strange about him.

For me, it’d probably be funnier if the owner had her suspicions, even if it boiled down to Nobunaga getting frustrated that her guesses are bad. Or if the other dogs were being persuaded to join Nobunaga in achieving… something. I don’t know what the solution is, but there’s something missing here that’s really hard to get past. The live-action ED is pretty good though, and I can’t help but wonder why this needed to be an anime over a drama, honestly.