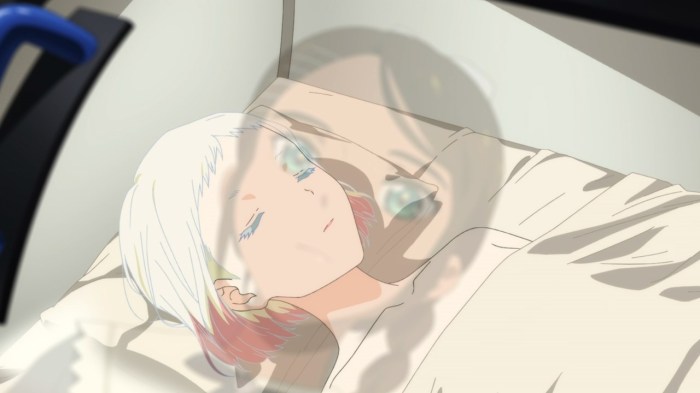 “A Story No One Knows”

Neiru unexpectedly invites the other girls over to her house, where they learn the peculiar circumstances of her birth and also the tragic fate of one of her fellow company members.

Even by Wonder Egg‘s standards this is a very very odd episode, partially for content but also because it sort of awkwardly lurches into an entirely different genre from the show we’ve seen up to this point. Unpredictability and an unwillingness to fit into a template have been strengths for Wonder Egg so far but this one might have stretched itself a little too thin. As a result, although it’s not without merit, this is probably the first episode of the show I came away from feeling a touch cold. 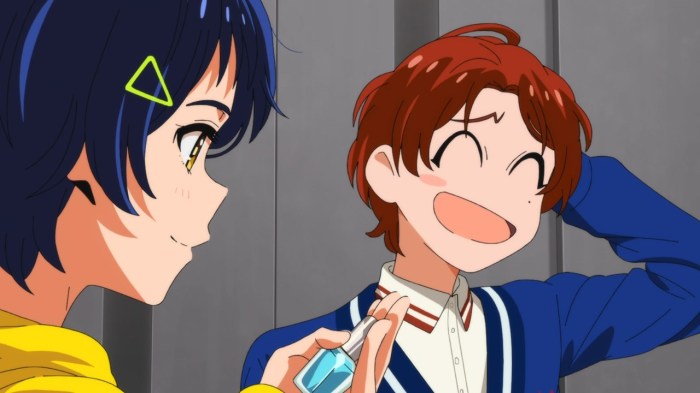 I think that part of what ails this episode is simply that so much happens in such a short space of time. We’re well into the back half of the show now of course, so some bumps in pacing are to be expected, but this part of the story dumps a huge amount of information on us at once without much time to process it, and as a result it significantly lessens the emotional impact that it could have. Discovering that Neiru is a test-tube baby grown by a mysterious society-cum-cult should really be a revelation big enough to power an entire story of its own, but here it’s mostly swept aside in favour of the drama surrounding her relationship with Kotobuki. This one was a tough sell for me – Kotobuki is potentially interesting as a character, but her detached snarkiness is not immediately endearing. The bigger problem is that it’s tough to believe she’s been such an influential figure in Neiru’s life when she’s introduced so suddenly and so out of the blue. I understand there’s a delicate balance to be maintained here, since one of Neiru’s defining characteristics is her unwillingness to talk about her personal feelings and relationships, but in this case the reveal is just too sudden to support what comes after.

All throughout its run, one of Wonder Egg‘s strengths has been conveying the complicated feelings that result from the heavy topics that it deals with. Like a lot of pieces of art which embrace surrealism and metaphor as their main storytelling devices, it largely operates on an emotional and spiritual level, rather than a mechanical plot level. We still have to know why things happen, but those explanations can be fairly broad if they make thematic sense. That’s why the gonzo sci-fi stuff which this episode introduces feels so out of place and awkward alongside the more traditional trappings of the show. I don’t really think I needed a bunch of talk about parallel universes or thanatonautics to justify the existence of the Egg dream worlds, and it’s especially incongruous after the show has done such a good job on much more realistic, grounded issues, like Rika’s focus episode last week. The drama here is so fundamentally divorced from the character analysis that the monster actually has to give himself an ‘as you know’ announcement to justify his presence. It’s clumsy and out of touch in a way the show has mostly avoided up until now.

On top of that, the situation with Kotobuki’s body in the real world feels a little contrived and pat to really stand alongside the best tearjerking moments Wonder Egg has produced. It’s true that the choice to turn off a comatose person’s life support is a compelling moral dilemma that fits nicely into the show’s examination of life and death, but it’s also dangerously close to a dramatic cliche at this point, and kind of just feels like another weird complication to pile on top of everything we’ve already got. In its defence however, I think that this segment also has the best character writing of the episode, as it focuses more intently on our main quartet and showcases their very personal reactions to Neiru’s decision. Ai’s story about Koito and the coin is an especially lovely moment that does well to link the current situation back to the emotional core of the story, and there’s an honesty and sentiment to these closing scenes which reaffirm the show can still tug the heartstrings when necessary.

There’s also a major development in the ongoing plot to consider here, as it’s revealed that Acca and Ur-Acca have been using Neiru’s secretary as a mole to spy on the girls, and that they themselves are responsible for the truth behind the ‘temptation of death’. This is exciting and worrying in equal measure, and I think a lot of how well Wonder Egg will be remembered overall will come down to how this plot is handled. The use of big, important Proper Nouns is a little scary, as it suggests that we’re gearing up for some classic anime bullshit to take place, probably involving secret conspiracies and mind control or something of the ilk. That’s what the pessimist in me says anyway, though the optimist would very much hope that the show continues to take its more holistic approach to heavy themes and find a more harmonious way to marry the work that’s been done so far with the need for some sort of resolution. This episode found the show a little off-kilter and alienating, but there were enough flashes of traditional strengths that I’m not too worried about it losing its way. Really it’s all about how they’re going to handle that upcoming climax.