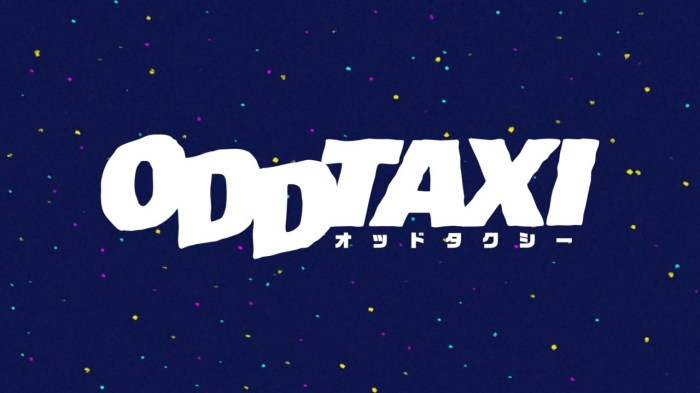 Anime original by P.I.C.S. and OLM
Streaming on Crunchyroll

In a world of goofy animal people, a cynical taxi driver in the big city gets dragged into a criminal investigation via his varied customers.

Iro’s verdict: What if Animal Crossing had social commentary?

This wasn’t at all what I expected from seeing a handful of preview images. Far from being some kind of funny animal gag comedy or something, Odd Taxi is a slow burn of intrigue and character conflict centered around our washed-up, middle-aged, walrus-man protagonist. The premiere sets up an impressive number of plot threads: there’s a teenage runaway who might be hiding in Walrus’s house, a baboon criminal on the loose, an alpaca nurse smuggling meds from her employer, a corrupt cop, a popular new debut idol, and several characters who are all related to these threads if not directly involved. Color me interested.

I feel like the ‘cutesy presentation with dark subject matter’ thing has been pretty much done to death at this point, but I was still drawn to Odd Taxi despite the fact that it makes liberal use of the cliche. There’s an appealingly subtle undercurrent of menace that runs through the show, which is greatly helped by the naturalistic, off-the-cuff dialogue that brings to mind western ‘adult’ cartoons such as Bojack Horseman more than any anime. Odokawa’s a likeably gruff protagonist whose world-weariness is easy to emphasise with, but his involvement with bent cops and teenage runaways hints at something darker beneath the surface. I’m incredibly intrigued by where the show is going to go and that’s always a good first impression to make.

Gee’s verdict: The OP is a Banger

No seriously, look it up. That aside, if you asked me to describe Odd Taxi, I’d call it surprisingly mundane. Like Iro, I was expecting some kind of shitty gag comedy where they repeat the same joke like six times an episode. Instead, we got a weirdly personal character study. And if you asked me for another word, I’d say disquieting. Amongst the tangents about Bruce Springsteen or the facile nature of social media, there’s a strange tension bubbling in the background.

At first, it seems to be setting up the the classic runaway girl finds refuge with a gruff cabbie. But the way the situation is presented drips with such a nervous tension that I’m not sure what to make of our walrus protagonist. Is he a well meaning man who’s just bad with words? Some kind of deranged kidnapper? Or is he straight up delusional? If nothing else, the first episode has done a fantastic job of dangling a number of interesting plot threads in front of us in just its first episode. I can’t help but want to see where they go.