Mukai Nayoya has recently started dating his childhood friend Saki Saki (yes, that’s her name), and things are going smoothly. During school, he’s asked out by Minase Nagisa, a girl he’s seemingly never met before. He loves his girlfriend sincerely, but instead of turning Nagisa down, he opts instead to try and date them both openly. Yeah.

It has been a long time since I’ve encountered a protagonist quite as insufferable as this one. He has the intenseness of someone like Tenya from My Hero Academia – seemingly operating at 110% and with brash, to the point commentary. Unlike Tenya, there’s literally no evidence that there’s thought behind the actions of our protagonist Nayoya. Irrespective of his actions in the episode itself, this character quickly established himself as nails on a chalkboard in anime form.

We do see the relationship between Nayoya and his girlfriend Saki very briefly before the second girl shows up, and while it appears to be an unconventional and intense relationship, it’s nothing too crazy as far as anime is concerned either. We even learn they were childhood friends, so it’s about as conventional as you can get for the first five minutes of a new series.

Nayoya winds up on the school roof, and is approached by Nagisa, a girl he’s not familiar with. She’s very obviously in love with Nayoya, which makes her confirming Nayoya’s name at the start of the conversation a little off, but she’s very quick to outright ask him out. As much as he’s liked his brief time with Nagisa, he thinks of the girlfriend he has and loves, and does the sensible thing. Wait, no he doesn’t.

Let me just get ahead of it now – if you want to have a relationship with multiple people and everyone involved is on board with that, knock yourself out. However, this is not that. Nayoya doesn’t want to say no to Nagisa, a girl he’s known for five minutes, and so he spends half of the episode trying to convince Saki that he should be able to date them both. Neither of the girls are into the idea, but they both go along with it when faced with the alternative – not dating him.

But this is a comedy after all, so it’d be unfair to judge the situation in realistic terms… except the show just really isn’t funny. The singular goof in episode one is that Nayoya is an idiot – he makes decisions without thinking about them, and he speaks bluntly about topics that maybe need more tact. The two girls are far more interesting than he is, but the situation they’ve set-up literally requires him to be the centre of it all.

So, uh, yeah. Not a show for me. I will say that the episode itself was quite well animated, but that’s honestly where my praise begins and ends with this one. The ending sequence also shows that there are going to be two more girls joining the idiot harem down the road, so look forward to that I guess. 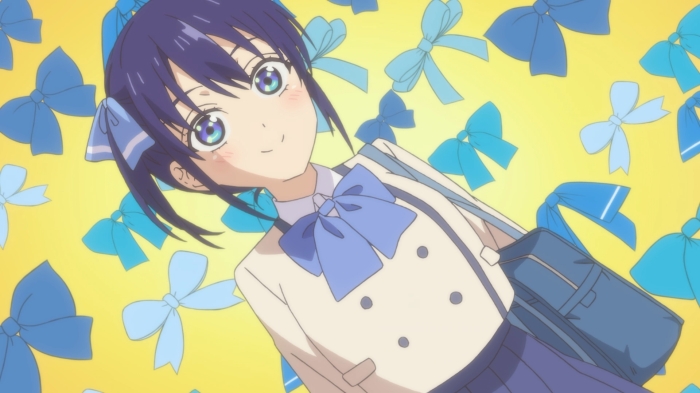 Alright, time for me to say the awkward things. Conceptually, it is possible for this anime’s overall plot to be good. Three people in a loving and consensual relationship is not just possible but practiced across the world, but not as common as monogamous relationships of course. Anime, manga and light novels certainly like to push their “harem endings” sometimes, and a series exploring that in practice could be interesting. Sadly, I don’t have high hopes for this show.

The most important part is consent, of course, and I was genuinely worried we’d have someone balancing two girlfriends who don’t know about the other. So this was something the show did reasonably well; protag proposed the situation, Saki wasn’t a fan, but was persuaded to give it a try. Hell, Saki was also somewhat infatuated by Nagisa, which probably helps.

Protag makes the correct decision that the two girls should get to know each other if this love triangle is to have any chance of working. Nagisa raises the very important point to Saki about physical intimacy which they then bring up with protag. After some comedy about having a threesome (of course), he agrees that abstaining from all “ecchi stuff” is probably for the best, at least in the short to medium term, which Saki was a little disappointed by, but in her view Nagisa comes in and is stopping her and protag from progressing their relationship, so being disappointed is definitely understandable. 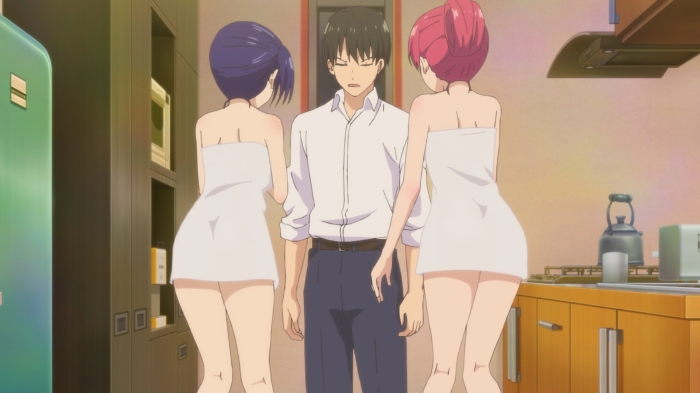 So that’s probably a more glowing review so far than perhaps you might expect. Well, here are the problems. First, Saki and protag have been together and known each other for a long time. Nagisa hasn’t even spoke to protag before her confession. If all three were friends, or even if the two girls knew protag separately and then they joined together in a school and proposed the relationship, that would be better and you could get some interesting tension and relationship stuff there. Instead, you’ve got a nobody confessing and protag is like “yep, definitely want you in my life as much as my current girlfriend who I’ve known for years”. Next, the show seems to be going down a route of competition between the two girls, especially since Nagisa’s portrayed as having a “more attractive” body than Saki, by Saki’s own admission. That seems like a super toxic relationship that isn’t going to go well for anybody.

In an ideal world, this story would end in one of two ways:
1) They’re a trio in love with each other (all three sides of the triangle are love)
2) The girls ditch the protag, they don’t need him. Just be gay and live a better life.

But it almost certainly won’t, so I might give this a miss.