Recap:  Atsushi and Rokka talk for one last time.

Wow, that was not the way I saw that ending play out. Just as I thought Rokka was finally using this talk to come to terms with Atsushi’s death and move on, it would appear she still can’t forget him. I know having to lose someone twice would be incredibly painful, but what was the point of all Hazuki’s work if she still is shackled by the one she lost? Thankfully, Atsushi comes to his senses and finally lets go.

The reunion with Hazuki was really sweet. It goes back to what I said last week that bringing Atsushi back would only make things harder on anyone, and I’m glad Hazuki realized that and was repentant for it. The one thing I loved most about Hazuki’s character was his brashness and tenacity, and after that apology it still shows through even after all he has been through the past few episodes. His boasting is like an expression of his youth and his devotion to becoming the one Rokka wants.

It would seem that last scene between Hazuki and Rokka finally showed the importance of that pot was finally revealed. It really didn’t do a good job of explaining it, but it would appear Atsushi’s ashes are in that pot. I’m still really creeped out about them talking about eating some of the ashes, but I guess its supposed to represent them accepting his death if I got anything out of that.

What this ending seems to reveal of Atsushi’s fate is almost too cruel. I did take some comfort in that it seemed he was no longer bound to the flower shop, thus allowing him to go to all the places his health never allowed him to go. It is interesting that he remains around even after Rokka dies. If I’m interpreting it correctly, it seems it was always his belongings that were the real tie. Still, since it’s clear that his poltergeist abilities were still in effect, how did the pair not realize his ghost was still around? It seems cruel that they simply left him alone all that time. 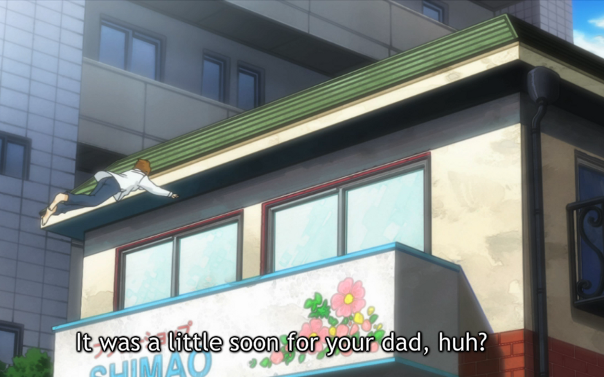 Coming out of the first episode of Natsuyuki Rendezvous I was the only member of the Glorio team that actually enjoyed it. I’m not quite sure if my history of Josei favoritism had clouded my judgement, but I saw the potential for a story about real adult relationships and about how to deal with loss. While it did satisfy those two ideas, it wasn’t nearly as involving as I had hoped.

My biggest complaint is how much of the romantic development gets railroaded by the possession of Hazuki by Atsushi. I enjoyed how earnest Hazuki was at vying for Rokka’s love, and then he’s taken out of the picture for more than half of the show. Once we learn that the picture-world was really just a space for Atsushi to mess with Hazuki, it really seems to drain any meaning for it besides a well drawn prison where nothing really happened. I also find it strange that not much thought is given by any of the characters into the moral quandary of the body swap. If she was spending so much time with Atsushi in Hazuki’s body, did she really completely fall in love with Hazuki for himself and not her husband?

Still, I enjoyed Natsuyuki Rendezvous for its fresh take on romance. The characters managed to pull off realistic adults. Their ideals on romance were not immature or naive. Hazuki as much as wanting reciprocation of Rokka’s love also wanted her physical affection too, and was not shy in pursuing it. I think the fact that even part of the sex scene is shown instead of implied really speaks to how seriously they take both sides of a relationship. While it is definitely not going to be in my shortlist for top show this year, or top romance for that matter, I still really enjoyed its characters and story.

One thing I would recommend if you have any interest in other media related to this story, don’t read the manga. I tried looking it up for reference as far as the last episode was concerned, and boy was that artwork horrible.