Recap: The week we gain a new member in the form of an athletic genius girl who is out looking for some fun.

Lifesong’s Thoughts: Not too much in the way of subtlety with this new girl. We are introduced to Kurugaya legs first, tits second, and everything else after her physical assets are well established. I will probably wind up liking this character, but all the still shots, and camera pans didn’t make for a very good first impression. I realize it was setup for a set of self aware gags playing off on the whole perfect girl has a bad personality shtick, but it was played so straight I may not have realized it as an attempt at humor if I didn’t know better. Again I am left wondering if it was funny in the visual novel?

The “fight” scene was pretty amusing. Imitation sword versus a pirate in a barrel toy? At least it wasn’t soap, and there were no achievement unlocked. Despite the incredibly arbitrary nature of these “fights” I always have a smile on my face by the time they end so I can’t say I hate them, but I miss the days of sticking a juice box in a girls nose or even the way Yuuichi picked on Ayu. In Kanon, Air, and Clannad all three anime have a fun male lead who honestly makes most of the comedic moments what they are. In Little Busters Riki is well.. boring. I am trying to keep an open mind, but he is not even part of the biggest gag routine. Muscle Chan is amusing enough I suppose, but the comedy in this episode left me wanting, and is starting to get a bit stale.

I feel like this shot sums up how this anime wants us to view Kurugaya perfectly.

I can’t shake this feeling that this anime is not really bringing good things to the table. Jun Maeda’s storytelling is straightforward to the point where even it’s biggest detractors know the formula, and can cite it to troll fans easily and accurately. Now I am not critiquing Little Busters for this formula as it’s something I’ve enjoyed quite a bit in the past, but this animation just isn’t very exciting. Look at the ending to this weeks lunch fight which ends with some flashy moves by Kurugaya except not.. instead we get a few mostly static frames, and then some words during an expression shot. I’ve seen visual novels with more exciting effects than this animated fight.

Maybe J.C. Staff is saving their money for something awesome down the road, but this fight while fun was also kind of depressing. Why is this anime if all the animation is going to be sub par? I love Jun Maeda’s stories, but I’m not just going to lap this up because of it. Take a moment, and remind yourself how KyoAni handled Tomoyo’s introduction if you need convincing. 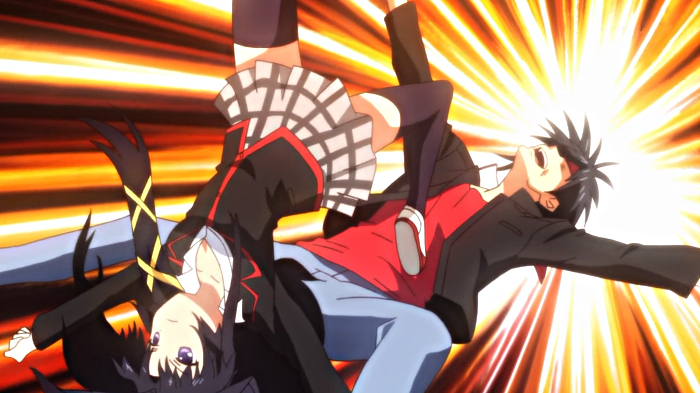 This would be a whole lot more fun to watch if it were animated instead of still shots.

In closing, I feel like my write up kind of betrays my feelings about this episode, and the direction I feel like Little Busters is taking. I actually do enjoy it, just I also kind of have this nagging feeling that the visual novel probably did everything I am getting here and did it better. I’ll be picking up the visual novel pretty soon so I can get a better perspective on how well the anime is doing. Maybe some of you visual novel readers can tell me what you thought of this episode? Is my sense of humor just poor? Or is this adaptation just not all that funny this week?