Recap: Rika gets sick from working too hard on the movie and is unable to finish it in time for the festival. Yusa discovers Sena is in the Neighbor’s Club and tries to find a way to shut it down.

Jel’s Thoughts: Rika sure is getting a lot of screen time, isn’t she? Not that I’m complaining, but I get the feeling she might be the writer’s favorite character at this point. She’s certainly gotten the most development out of all the girls in season 2. I don’t expect this to happen, but I would absolutely love it if Kodaka ended up with her, just to troll the audience. For a series like Haganai that kind of pokes and prods the usual harem conventions, would it be that much of a shock? I mean this episode he was even openly flirting back at her, when does that ever happen? 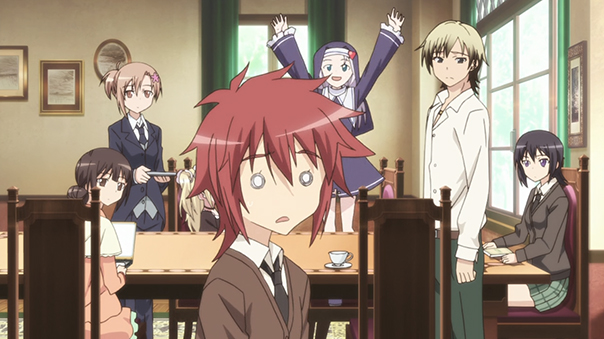 Of course Rika being awesome is nothing new, and there were a few other developments setting up for the big finale. The lesser of the two was Yusa sticking her nose in the Neighbor’s Club business and getting thoroughly defeated by Yozora and Sena. Initially I figured she was just another tack on character to join the club and spice things up, but it seems things have moved a lot faster than I expected. Instead it seems her and the student council president are around to give Yozora and Sena somewhere to direct their vitriol since, hey, they’re all friends now! I’d still prefer she didn’t exist and we just wrap this thing up here, but I can live with that.

The big moment this episode though was Sena’s completely casual, off the cuff confession to Kodaka. What was I just saying about poking and prodding at harem conventions? As if the fact she even did it wasn’t surprising enough, the way she went about it was both unconventional and completely perfect for her character. What was much less surprising of course was Kodaka’s reaction, which has been the biggest issue driving these final few episodes. Part of you does want to just punch him for running away, but at the same time you kind of understand. We’ve already proven he’s not dumb and understands how the girls feel about him, so what was he supposed to do? They’ve JUST reached the point where everyone is friends now, if he answered on the spot it could have jeopardized that. I guess it would have been best to at least ask her to talk about it outside or later or something, so I’m not saying that was the BEST thing to do, just I understand why.

I have to admit I’ve already had the ending (which should coincide with the end of the latest novel) spoiled for me, so I’m going to keep my mouth shut as far as speculation goes. I will say I heard talk of an anime original ending though, so maybe I’ll be completely off base. Either way I have been pleasantly surprised with how Haganai has stepped up its game, especially after I was so hard on it for its harem hijinks earlier in the season. But I’ll save all that for next week’s final impressions.